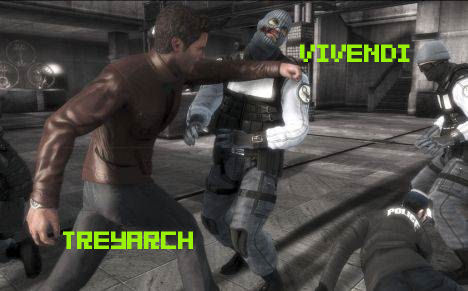 Treyarch’s Garrett Young has revealed how his team check out the latest release demos, and has confessed that The Bourne Conspiracy left him feeling a little flat.

“The Bourne game… we did download the demo, we did look at it, like we do anything that’s new and coming out,” explained Young. “Turok we played and other things that are new, we played GTA although that’s not really in our space. But … yeah … not super impressed with [Bourne] … it’s always tough though when you make a game and you don’t have the lead character from the movie.”

Treyarch is currently working on its own movie license, Quantum of Solace, which Young is producing. He’s also not alone with the Bourne Conspiracy disappointment, as our very own Mr. Burch gave the game an embarrassing 3.0. I don’t think the inclusion of the leader character would have helped, however.

Filed under... #Activision#Does it suck?