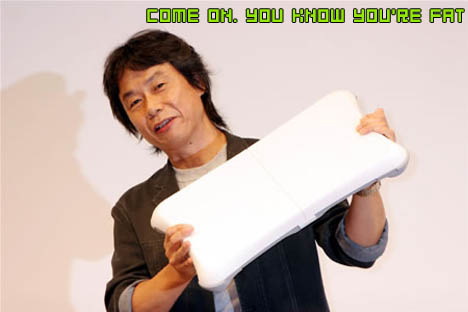 At sister site Japanator, we continue to follow the strange eating habits of the Japanese people, and recently we’ve noticed that their habits have taken an unhealthy turn. Even their fast food, like McDonalds Japan’s Mega Mac and Mega Teriyaki (903 calories and 64.3 grams of fat), are getting out of hand as far as calories and serving sizes go. Perhaps all this pigging out had something to do with the new healthcare initiative that started this week. Japanese companies and local governments must now measure the waistlines of all employees and family members over the age of 40, and if they go past these preset guidelines, their employers are fined… for every inch over the maximum. It was reported that NEC Corp. alone is having to dish out $19 million already!

It may be a crazy law, but Japan is trying to keep their people healthy and shapely. The government’s goal is to reduce the overweight population by 10% over the next four years, and 25% over the next seven. It would be easier to reach this goal if they would just shut down the fast food joints.

So, who is getting rich from this health push? Game companies. Konami is pushing their Dance Dance Revolution series as physical education products. They’re pushing these products on schools, where the kids are tubby and lazy, or hospitals, for medical benefits. Since they’re approved medical devices, schools and hospitals can send the bill to the insurance companies. On top of all of this, Konami also operates a string of healthcare clubs.

Nintendo is also promoting the health values of their wand-waggling games, though the health benefits of these motions are still disputed. One thing’s for sure: their latest title, Wii Fit, is little more than a weight management system with an included scale.

It sounds crazy, but if your boss and his company had to shell out for your belly bulge, you’d probably be looking for a quick solution. The new guidelines dictate that men whose girth exceeds 33.5 inches and women whose waistlines exceed 35.5 inches are considered overweight. Cutting out Mega Macs and hitting the Wii Fit board might help save your job!

What do you think. Is Japan the next America? Could you imagine getting heat from the boss about your waist size? That’s like the military here!