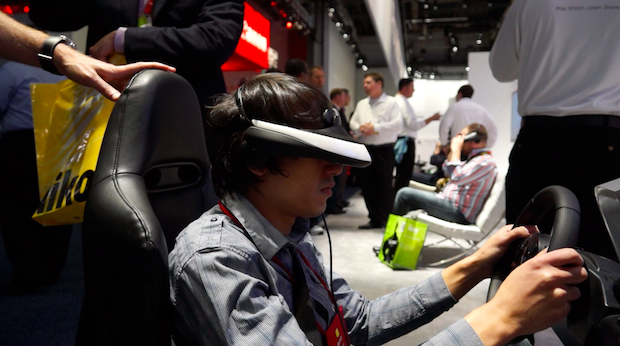 We saw an early version of Sony’s wearable visor television thing at last year’s CES and laughed loudly and rudely in Sony’s face. Now that silly space visor is a real thing, called the Personal 3D Viewer, model number HMZ-T1, priced at $799. This thing claims to give you the experience of watching a 150 foot 3D screen from 12 feet away, and features 5.1 surround sound and easy HDMI connectivity.

I was able to play a bit of PS3 on the wearable display to test it out here at CES 2012. Surprisingly, Gran Turismo 5 looked really nice on the HMZ-T1, with its subtle 3D effect and slick car models. I think the unit’s little OLED screens do a great job of blasting HD gaming to your eyeballs. The game sounded pretty nice, too. Overall, it makes for an immersive gaming experience, and it’s a cheap way to get into 3D.

It’s too bad that this thing is a front-heavy beast. The space visor is not designed to be supported by your nose. Instead, you’ll have to feel the squeeze of the unit’s rear straps against the back of your head. Any less than the tightest setting will have the somewhat heavy unit falling down onto the bridge of your nose. That hurts, trust me. Even when it’s mounted correctly to your head, the weight will have you looking like a stroke victim when you play, as it weighs your chin down to your chest.

The HMZ-T1 actually performs better than I imagined it would. Too bad it makes you look like a weirdo cyclops.