My board game love is the stuff of legend but I tend to play more complex or lesser-known games than the standard Hasbro lineup of classics. Still, with last week’s announcement of Hasbro Family Game Night coming to XBLA, and the promise of a unique channel being added to the online service specifically for this line of games, I was curious to see what EA Hasbro had on offer here at CES.

It’s one of those situations where I went in with an low expectation and was not at all disappointed or wrong to have thought that way, yet the games still managed to surprise me pleasantly from time to time. Hit the jump to see what EA has in store for casual gamers and fans of board games on XBLA in the coming year. 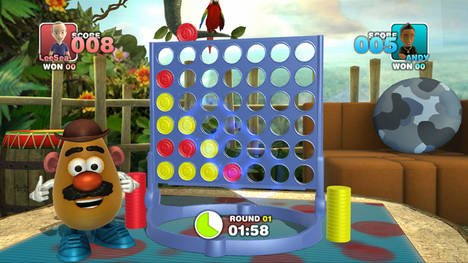 Not wanting to just release another collection of board games, as has been done countless times in the past, EA Hasbro have made an effort to really beef up these games with some new modes. Every game that is confirmed for inclusion in the series will have some kind of advanced mode and several even have additional ways to play them beyond that.

A great example of expanding the games is Connect Four. In its advanced mode, there are special discs in addition to the standard ones used for making rows. These can be used to push the bottom piece in a column out of the board and drop everything else down, prevent a player from being allowed to drop a disc into a specific column for a single turn and various other abilities that force you to think about this simple game in a completely different way. And it’s really fun.

In fact, all of the reimagined games I had the opportunity to play were decent, though some were less thrilling than others. Boggle has a mode where the first and last letters of every completed word swap locations on the grid, which keeps things moving and could screw things up for your opponent. Scrabble has you locked in a race to build connecting words that will allow you to stretch from one side of the board to another which, while quite different from the standard game and requires a different sort of wordplay, isn’t exactly exciting to play. 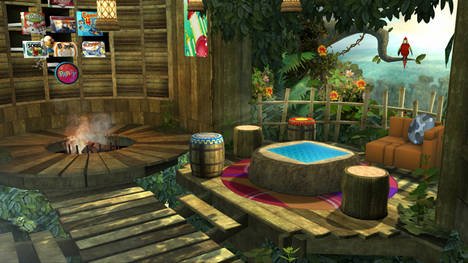 With the exception of one, the games we know about for XBLA have already been released as part of the Hasbro Family Game Night collections on Wii and PS2 last holiday season (the remaining game, Scrabble, has been announced for every platform on earth as well). What the company is attempting with XBLA is much more ambitious, however, offering a virtual game room and a steady stream of games which can be added to your existing collection.

Basically, this means that within the Hasbro Family Game Night shell, you have all of the games associated with the series that you’ve purchased in a cute, animated shelving system. Within this environment is some furniture and chairs and I am told that themes and new furniture will be available as DLC in the future (for a nominal fee, of course). Mister Potato Head runs around in there too.

The whole idea of having this environment sounds both silly and greedy on the surface. Having another menu to travel through just to play the game you want, especially one which will have a load time because of its graphical elements, somewhat defeats the purpose of the pick-up-and-play nature of most XBLA titles. And microtransactions for pointless items and themes within that menu that I’m already annoyed about? “Crass” would be the word I would use to describe that. 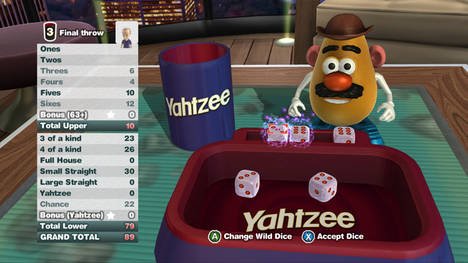 But there is some method to their madness. At the bottom of your games list is a huge “Party” button. Just as in the PS2 and Wii versions, this launches you into a series of random, quick mini-games based around the games in your collection. As new games are made available, they will include more of these mini-games, further expanding the sort of chaos that makes for a good, casual party game. So, when it comes down to it, the annoyance of the game closet is counterbalanced a bit by having a continually growing party game.

Of course, all of the games will be featuring both local and online play, as well as make use of Avatars. Voice chat will be supported across all games but EA has opted out of supporting the Live Vision Camera, pointing to concerns that some behavior which could be performed by users might not mesh particularly well with the “family” image they are attempting to promote. 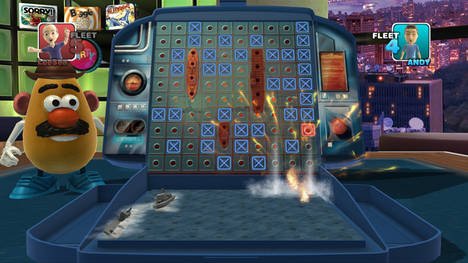 I’m really torn about Hasbro Family Game Night. I love the changes they have made to most of the games to make them more fun for console gamers and I’m glad to see that games are going to be available on an individual basis than as a complete package. At the same time, pricing has yet to be determined (I have been told that they want pricing to be “uniform” but that doesn’t mean things couldn’t be “uniformly” overpriced) and that could make a huge difference in whether or not I could recommend picking these up. And I’m still not sure how I feel about the menu system in spite of the party game option they plan to provide.

Nevertheless, this is a huge deal for EA and they’re obviously taking it very seriously with plans to continue releasing games on the platform for a long time to come. It will be very interesting to see the results, as it could make a huge push for still more board games (from companies Hasbro hasn’t raped and pillaged yet) to make the transition to digital play.

Filed under... #Board Games#CES#Electronic Arts