Legion helped it get there

EVE Online developer CCP has a new first-person shooter but there’s a chance no one will ever get to play it unless they happen to be in Reykjavik, Iceland this weekend. Project Nova is the name of the game, a moniker designed to indicate exactly what it is to this point: A project. Whether it ever turns into something more depends on a number of things, a major one being how this weekend goes.

CCP has made it perfectly clear over the past few years that it has no problem shutting down a game before it’s ever launched. If a project isn’t to CCP’s liking, it’d rather not release something than press the issue. Two years ago, Project Legion was announced as the maybe-successor of Dust 514. Now we know that’s not the case, as Legion was officially shelved.

Instead, Project Nova has taken over and it seems a much better candidate to actually end up as a finalized product. That’s mighty obvious judging solely by the two matches we spent with Nova. But, we also sat down with the game’s senior director Snorri Árnason to get a better feel for the developer’s intentions.

The nuts and bolts of Project Nova are that it’s a free-to-play first-person shooter for the PC. What we saw was a six-on-six fray, but Árnason explains that was only to satisfy space restrictions at a convention; it’s going to be 16 versus 16 instead. CCP also makes a point to emphasize that it’s aiming for an “uncompromised 60 frames per second” for rigs with the right specs.

Project Nova is set to have three main classes — light, medium, and heavy — but there’s a lot of customization beyond that. In all actuality, branching class trees mean that there are 32 different roles. Sentinel, Vanguard, Support, Assault, Infiltrator, and Sharpshooter are the six easily identifiable ones. It gets more specialized from there, with loadouts able to mix and match weapons freely. 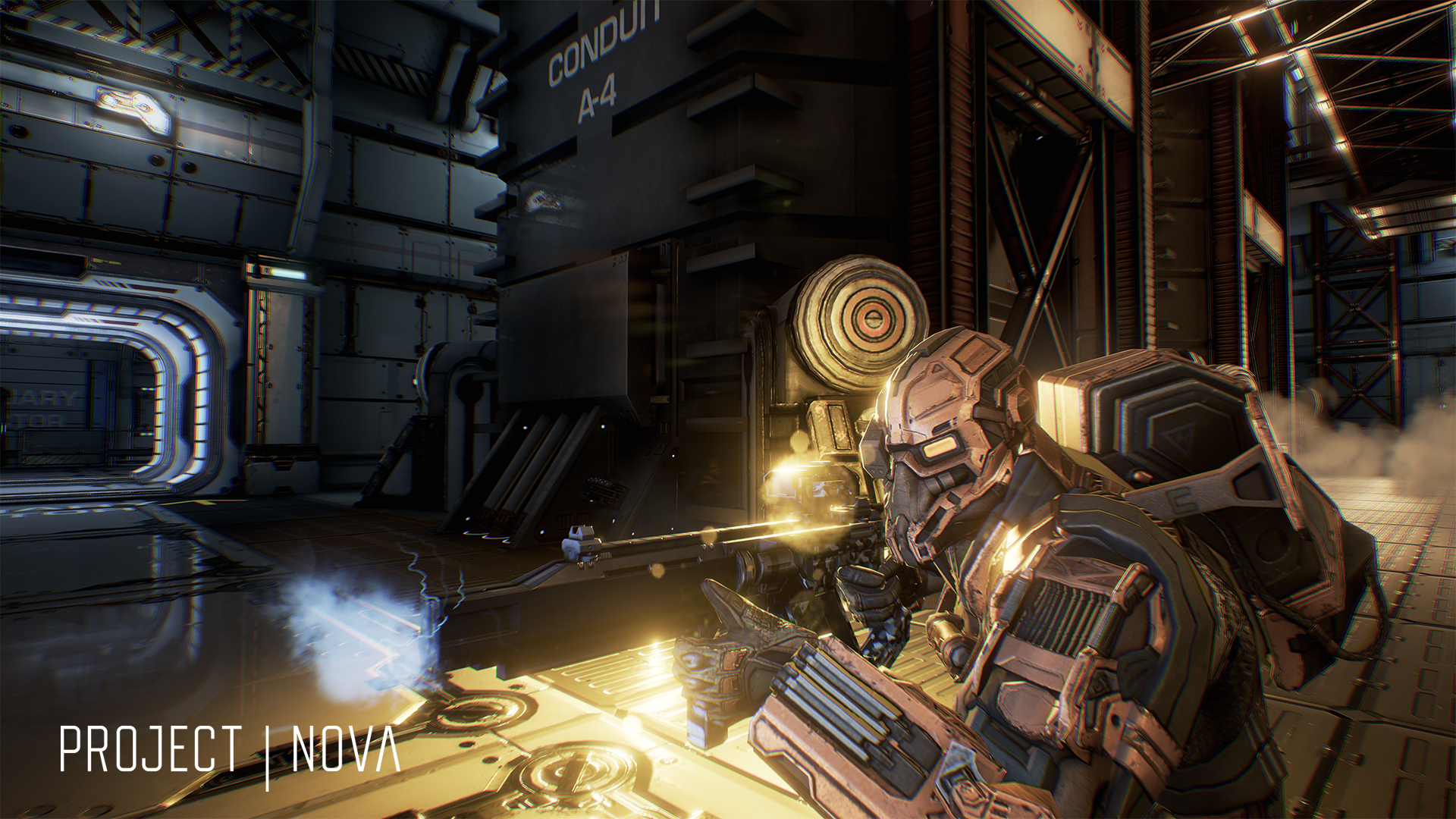 Proficiency is the only way to earn that specialization, though. Árnason says progression is something that’s earned and that the effort is rewarded. “These are not final, but the progression is a kind of tech tree where you have to play in the loadout to earn it — different from EVE and Dust 514, actually,” he comments. “It was kind important to us to say ‘Okay, you earned this.” You can’t just automatically own everything.’ There’s kind of a respect to the players who play that class. If you are true Support, for instance, you earned it.”

Despite the fact that Project Nova is intrinsically tied to EVE Online, Árnason insists that the focus on making a great shooter that fits its setting is first and foremost. “I think it’s kind of a step back to a proper shooter in some sense. It’s meant to be a semi-realistic tactile squad-based shooter. By realistic, I mean that its supposed to make sense in this universe, which is a future universe based on real humans and less fantastical. We can see that a lot of shooters are going into fantasy, cartoons, way more extravagant stuff. We don’t want to be there,” he offers.

The map that we played struggled to spotlight this desire for identity. It was set on a ship that made for a fine first-person shooter setting, but lacked the personality required to make it a memorable EVE setting. Árnason seems to be cognizant of the need to do better in this area.

“It’s very important to me and the team to be very thematically accurate and to take place in EVE in a recognizable way. I want to be on ships, I want to see planets, I want to know where I am. I want to feel like I’m in EVE. That’s a passion to be in EVE. Dust 514 was maybe too generic on the planets. You wouldn’t always necessarily know you were in New Eden,” Árnason commented.

If that gets sorted out, Project Nova seems as if it could be a very good shooter in the free-to-play space. Dust didn’t end up as successful as CCP would’ve hoped, but at least the developer looks to be learning all the time. For instance, even though nothing ultimately became of Project Legion, it appears to have been integral in laying the foundation for Nova.

As Árnason explains it, the purpose of Project Legion was to be a stepping stone. “ Legion was an Unreal Engine 3 game. It was something we basically tried to bridge the gap from PlayStation 3 to Legion in UE3. The idea for Legion at the time was ‘Get us to the other platform without too much investment into tech, and go straight to PC.’ Technically-speaking, it became a dead-end to keep working on UE3. That’s why the project was shelved.” 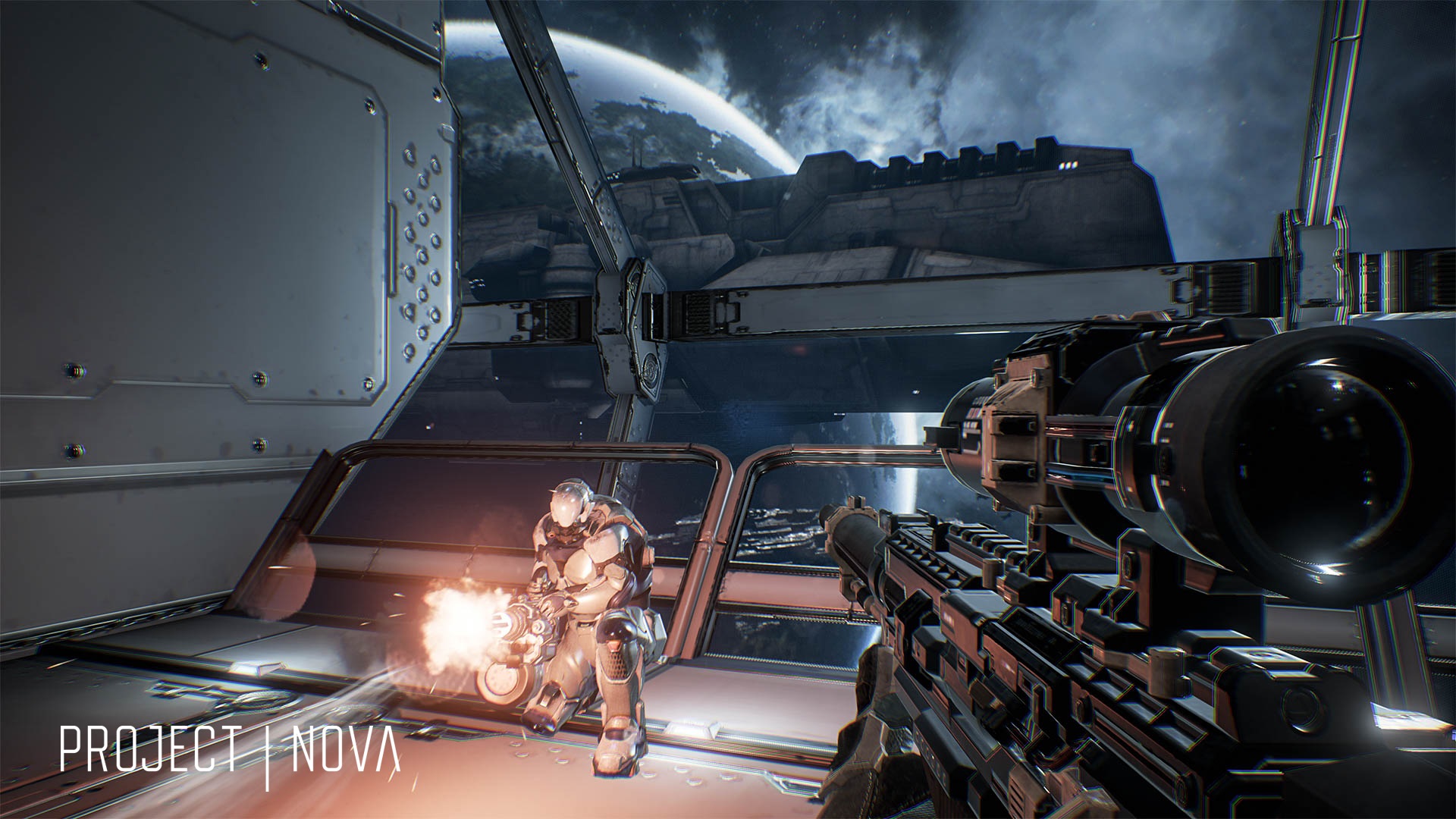 He continues “At the time, we were introducing a rigid stage gate release systems within CCP to start being more harsh on how we approach new development and live products. At that point, World of Darkness was also being scrutinized heavily, and ended up being closed. Legion went through that stage gate as well and it was an obvious decision to say ‘Okay, this isn’t going the right way. We’re shelving this idea of a PC first-person shooter in EVE, and we’re focusing on Dust 514.'”

“For Dust 514, we spent a lot of time and effort and resources into making it as good of a business as possible. At the end, we also shelved that. When we saw the end of the road for that project, we started thinking about EVE again. Now that Gunjack has been very successful in Unreal Engine 4, we thought ‘Can we do something with this (with a first-person shooter)?’ We went through the whole concept/prototype stage gate release system that we introduced, and here we are.”

It’s that gated stage system that holds the fate of Project Nova. Two years from now, I very well might look at this piece and think “Too bad that game didn’t actually turn into anything.” Things are looking more up than that, though. The fact that it’s playable and at Fanfest is an incredibly positive sign. Legion was never afforded that degree of public availability.

For now, things are humming along. Árnason says “I was very happy that we were able to (have a playable demo in Iceland). It’s quite ahead of schedule. We didn’t expect to have a robust hands-on at Fanfest. When we saw that it might be a possibility, we changed some of our scheduling to kind of prioritize getting it into the hands of the players. We actually had to switch our milestones. Fanfest was a secondary objective and it turned into a primary objective to get the feedback.”

If that feedback is glowing enough, we might see Project Nova by a more official name sooner rather than later. Talking about the sought-after goal of introducing the game to a broader audience, Árnason reflects and says “We’re aiming for an alpha in 2016. This year maybe? Could be.”