Spoilers: It was a glorious death!

Last weekend, we reported on a battle that was taking place in EVE Online. At the time, it wasn’t hard to see that it was the literal largest battle that had ever taken place in the game since it launched back in 2004. Developer CCP has analyzed the data and released the official numbers from the skirmish, which was the culmination of a months-long war between two of the largest player made, and run, alliances in the game: Test Alliance Please Ignore (TEST) and Goonswarm Federation (GOON). This has come to be known as the “Battle for 6VDT-H,” sure to be one of the last battles in the Fountain War.

The official development blog post from CCP does a great job going over the different stages of the fight in detail. For the whole skirmish, TEST was outnumbered by GOON and their allies, which together comprise the Clusterfuck Coalition (CFC). CFC was quick to take hold of the system, and trap the forces of TEST at a single station in the system. Even if members of TEST escaped from the warp-inhibiting bubbles, the exits and safe zones in the system were locked down by CFC, with troops waiting like spiders for flies.

After that, what took place was a last stand by TEST to go down in a blaze of glory. Even when all seemed lost, instead of backing out, their forces dove back in for what essentially amounted to a kamikaze attack. A kamikaze assault is never usually performed in EVE, as the values of the ships are seen as better utilized in later fights. Here, TEST showed a great fervor with an admirable last showing of their member’s dedication to their corporation.

The number of combatants, that is, the number of players in the system 6VDT-H, is reported to have peaked at 4,070. This number cements the battle as not just the largest in EVE Online, but also the largest space battle in human history. It may very well also be one of the largest player vs. player fights in any videogame as well. The fight lasted eight grueling hours — 2591 ships total were lost, including 621 pods.

Unsurprisingly, Goonswarm Federation was the single alliance with the highest amount of kills, with TEST ranking in at fifth place. Stealth bombers proved themselves to be the deadliest of the ships brought out that day, with 761 kills made through bombing runs. Charts of the full breakdown of kills by alliance, and kills by ship type are given below. A full recap of the battle, can be read on the Eve Online developer blog. 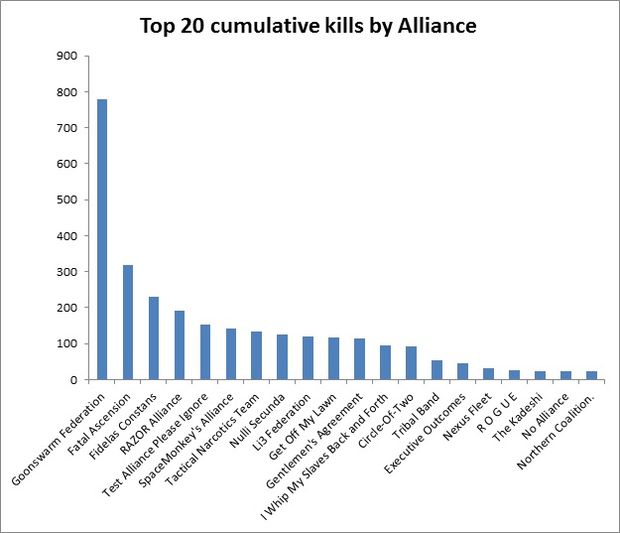 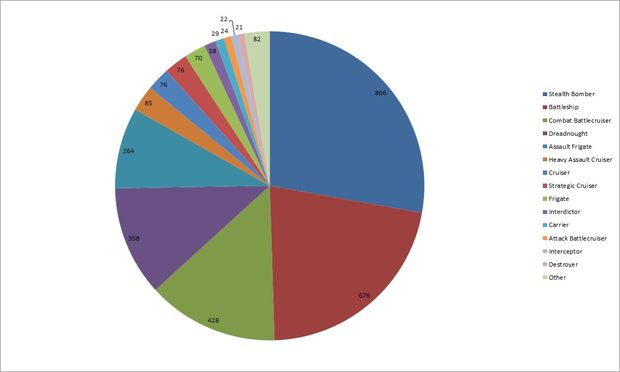