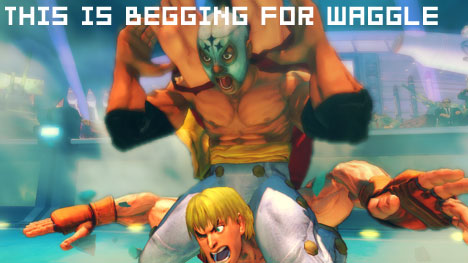 When Street Fighter IV was first teased last year, rumors began to circulate that the title may indeed be coming to the Wii. The rumors were squashed recently, when Capcom officially announced that the long-awaited fighter would be coming home to the Xbox 360, PlayStation 3, and PC only.

In fact, the game’s producer Yoshinori Ono told us that the initial rumors got so bad, they actually had to send an email to Nintendo with an apology. So I asked him, is the possibility of a Wii version of Street Fighter IV that ridiculous?

“It’s not that a Wii version would be impossible or just so far outside the realm of physical possibitlies to blow our minds or anything,” he said via a translator. “We’re not ruling anything out; anything’s possible.”

“When it comes down to looking at the main target we’re trying to hit with this game,” he told me, referencing people who probably played Street Fighter II on the Genesis or Super Nintendo, “these guys are more likely to own a PS3 or Xbox 360 than a Wii.”

“So really, are there fighting game fans that want this, especially in North America?” he asks. ‘If there are, and it turns out there are, then we’re more than willing to do something for them. But right now, it just seems like a safer bet to go with the 360, PS3, and PC.”