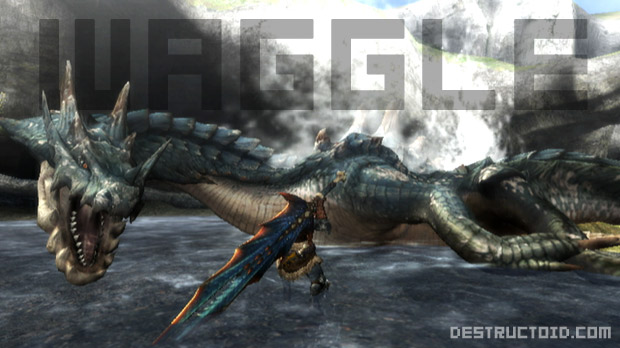 Hey, Monster Hunter fans! Look! A thing happened! Capcom has just announced that the formerly Japan-only Monster Hunter 3 will be coming to North America and Eurpoe, where it will be known by the title Monster Hunter Tri. Yeah, I dunno why they’re calling it that either, but who cares? It’s the new Monster Hunter, and it’ll be here in early 2010.

Originally planned for the PS3, the game has turned out looking pretty damn good for a Wii title, as you’ll see in the following video. In addition to being exceptionally pretty, it also features co-op all over the place, with 4-player online (!), 2-player local, and an AI partner for its single player mode. I don’t normally like AI partners, but this guy’s name is Cha-Cha, and he looks like an acorn. I will make an exception.

As you might expect, the game is full of new weapons, armor, and a ton of new enemies. The full press release is posted along with the video after the jump with some more details. This is a series I’ve thought about getting into for a while now, and this being the first one we’ve had lately that wasn’t on a handheld, now might be a good time.

SAN MATEO, Calif. — August 3, 2009 — Capcom® Entertainment, a leading worldwide developer and publisher of video games, today announced that Monster Hunter™ Tri will be released in both North America and Europe for Nintendo’s Wii™ system in early 2010.

Monster Hunter Tri will set a new bar in the action/adventure genre with the introduction of new features and game play elements as the multi-million unit selling franchise makes its debut on the Wii system.

One of the most strikingly beautiful titles ever developed for Wii, Monster Hunter Tri depicts a living, breathing ecosystem where man co-exists with fantastic beasts that roam both the land and the sea. Featuring both online and offline cooperative modes, players can join online hunting parties with up to four players or play with two players on a single TV for select quests. Players also have the option to face Monster Hunter Tri’s challenging quests as a single player experience accompanied by Cha-Cha, an AI hunting partner whose tracking and trapping skills will prove invaluable in the hunt. New items, weapons and armor sets will also be available to assist the hunters as they embark on the most incredible Monster Hunter adventure to date.

“Fans of Nintendo and Monster Hunter are eagerly anticipating the launch of this title in the US, which will be the first time the series is available on a Nintendo home console,” said Steve Singer, Nintendo of America’s Vice President of Licensing. “Having Capcom bring Monster Hunter Tri to the Wii console provides tremendous action, fun and entertainment to both veteran players and series newcomers alike.”

Visitors to this month’s GamesCom European gaming convention in Cologne, Germany August 19-23, will be the first to sample a localized version of the title on Capcom’s stand as it makes its English debut for a western audience. GamesCom attendees will have the opportunity to play the same game that took last year’s Tokyo Game Show by storm, with lines that stretched around Capcom’s stand as eager Japanese gamers waited in excess of five hours to play.

This desire to be one of the first to experience Monster Hunter Tri is indicative of the impact the Monster Hunter franchise has made on videogame culture in Japan. With sales of the series totaling well over 10 million units and 3.5 million sales of Monster Hunter Portable™ 2ndG alone, it’s no surprise to find that Monster Hunter has given rise to dedicated “training camps”, country-wide festivals and numerous licensed products. The franchise doesn’t just top the charts in Japan; it’s become a social phenomenon.