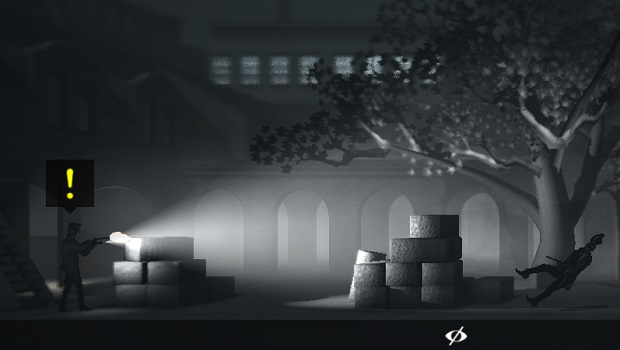 You can almost hear the sousaphone

I think I’ve probably made it clear that I like a good stealth game and thankfully I had the chance to try out the lovely-looking Calvino Noir at EGX. Set in post-war Austria (I forgot to ask which war… whoops), players control Wilt, a deserter turned criminal-for-hire. After being contacted by a mysterious femme fatale, Wilt is charged with stealing valuable documents but soon finds himself double crossed and on the run.

First thing you obviously note about the game is the moody black-and-white visuals; with a hint of film grain, they perfectly evoke the classic noir feeling of a film like The Third Man. There’s great use of light and shadows too. In the demo I played, there was a sequence set around a large staircase that had shadowy alcoves which Wilt could hide in. Despite the presence of two guards, I managed to guide him into the next room… which contained a guard who shot me.

You control Wilt’s movement using the mouse which is initially jarring, as the game is presented on a 2D plane. I kept wanting to use the WASD keys to move him around although having actions like opening doors and hiding tied to context-sensitive buttons made more sense.

It took some getting used to but I was able to successfully navigate around some locations without too much trouble. Still, the game feels like it’s early in development so hopefully some gameplay tweaking will take place between now and its release in 2015.