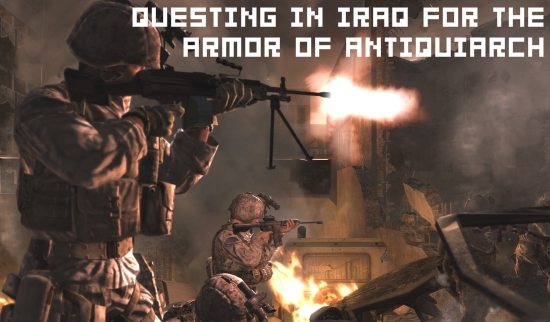 You’d think with Activision acquiring Blizzard that this idea would have cropped up sooner, but better late than never. It’s quite possible that Activision may have some inclination to produce a Call of Duty MMO, if the Activision head’s latest comments on the franchise are anything to take out of context.

“…when you think about other properties that we own and control, like Call of Duty, and what would be the natural evolution of a property like Call of Duty into a massively multiplayer environment, and how do you monetize that,” stated Bobby Kotick at the Morgan Stanley Technical Conference.

Of course, he’s talking in pure hypothesis for the moment, but it’s an interesting idea, especially with the surge of popularity that the series has enjoyed with Modern Warfare. If it took the modern-day setting as opposed to WWII, a CoD MMO could have a lot of potential for fun. That said, playing as Nazis in an MMO would be great for the bad-taste hilarity that would surely occur.

Do you think this would ever happen, and if so, how successful would it be? Can you see Blizzard influencing Activision’s properties in the future?

Filed under... #Activision#Blizzard#Call of Duty