The rumors of Activision charging additional fees for Call of Duty online multiplayer have been pretty persistent for the better part of the past year. Even when Activision has stated multiple times that they won’t be charging for online play, it still keeps coming up.

Well, we can clear the air on this whole matter with the announcement of “Call of Duty: Elite,” a free and paid service that is built specifically to take full advantage of Modern Warfare 3 and all future Call of Duty titles. Elite will launch with Modern Warfare 3 but there will be a public beta test this summer for Elite using Call of Duty: Black Ops. The official site will have more details soon.

Activision wasn’t ready to talk about a price point, but a number of the features I’m going to detail for you will be part of the free service. As for the paid content, it will cost “less than any comparable online service for gaming or entertainment,” according to Jamie Berger, VP of Digital at Activision. The service will also be an all-inclusive one, meaning that all digital content released for Modern Warfare 3 — such as map packs — will be delivered to you at no extra cost.

The team behind Elite, Beachhead, is a new standalone team at Activision that is dedicated to “evolving the [Call of Duty] service year-round.” The service will provide worldwide, 24/7 programming and customer service for all the features that promise to enrich your experience. 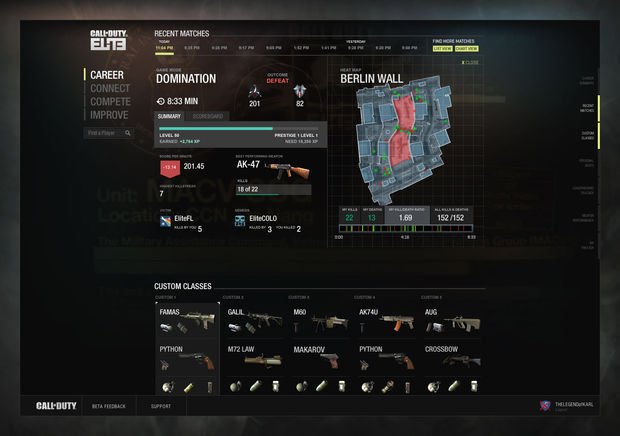 Elite will be available through the web and within the game on the Xbox 360, PlayStation 3 and PC. We were shown a very slick, quick and easy-to-use page that’s broken up into four sections: Career, Connect, Compete and Improve.

I also got a quick preview of the Elite mobile app (the iPhone version, specifically), which will be a streamlined version of all that the web and console versions will offer.

Players will get to see an overview of critical game stats, recent performances, win/loss ratio, XP, personal bests, weapon performances, leaderboards and more, all in the Career section. You can easily compare your performances against anyone simply by typing in their username. You will also have access to “heat” maps, with a timeline that shows you where every kill/death took place along with the weapon used. 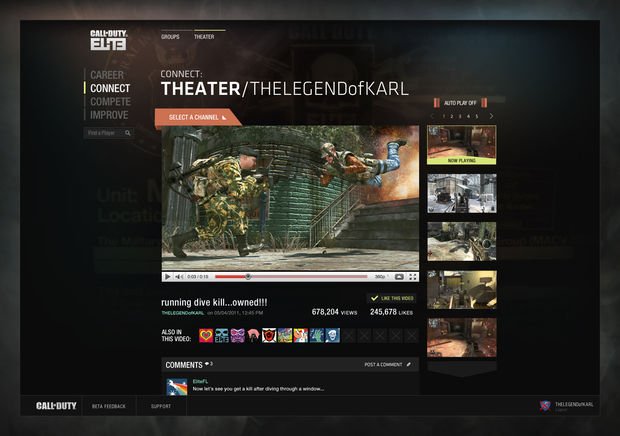 Connect gives you easy access to other players and lets you find specific gametypes that you want to try. You can look for your favorite playlists, see who else likes the specific gametype you’re looking at and make matches happen. Your friends list is integrated into the website to speed up the process, too.

Connect goes even further than that, as you can find groups of people who share similar interests. There’s a search bar on the page and, for instance, you can type in “Destructoid,” which will instantly connect you with other gamers who are into Destructoid as well. If a group doesn’t exist already, then you can easily create it yourself. Group pages will have leaderboards just for the members of that group, including stats (like the collective hours played), and you can even leave comments on the group like a Facebook fan page.

The final feature that Beachhead showed off for Connect was the theater section. Here, you can see staff picks, most viewed, most liked or recent videos users have created in Modern Warfare 3. 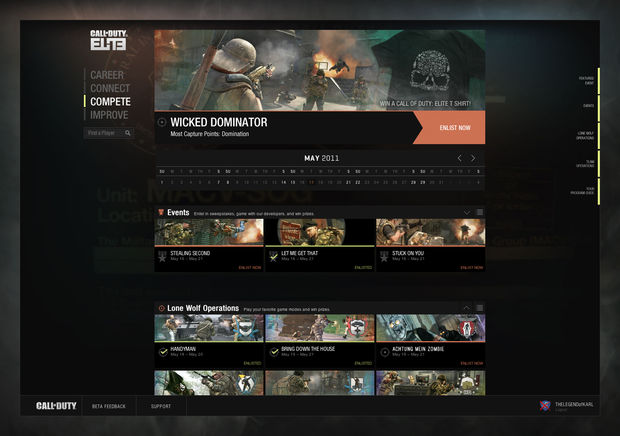 This is the official tournament section driven by Beachhead. The developers will have a consistently updated program guide that users can participate in to win prizes. One example given was a screenshot contest, where you’ll be able to share a screenshot and the best one will win some kind of prize. For the most part, participating will net you in-game badges, but real prizes on offer include an iPad.

Elite will include robust support for private clans that can be integrated into the game, too. More information on that will be made available later, but for now, know that you’ll be able to organize tournaments and set up clashes like group-vs.-group, clan-vs.-clan, and intra-clan tournaments.

The final section is exactly what it sounds like. Improve goes deep into the experience and should be able to help you become better at Call of Duty online. You’ll get to view top-down images of any map marked up with starting points, objectives and the general flow that a mode can take. Weapons, attachments, killstreaks, perks — it all gets broken down, allowing the player to study the pros and cons of everything.

Improve will even provide video guides, which are way more useful than printed strategy guides. 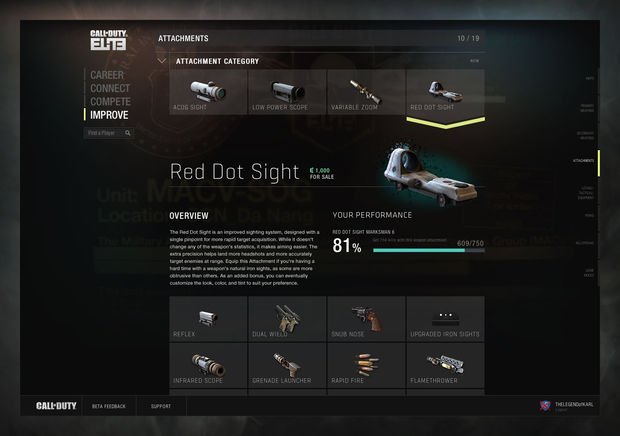 Activision strongly believes that this is the next step in online gaming, and feels that this will really enrich the Call of Duty multiplayer experience. The company is committed to making sure it gets the premium membership right, and it will be interesting to see what they pull off in that regard.

I’m really curious to see how much Activision is going to charge for this service. If it ends up being less than $30 a year, well, that’s great. So far, the last two Call of Duty games have each released two map packs at $15 a pop. The Elite program will get you all the downloadable maps plus the full service features.

The question, though, is if the Elite service will be worth it when compared to the free offerings. I’m also curious as to whether you get to hang on to the maps once your Elite service has run out.

What’s your take on the whole thing? Do you see yourself using Elite?