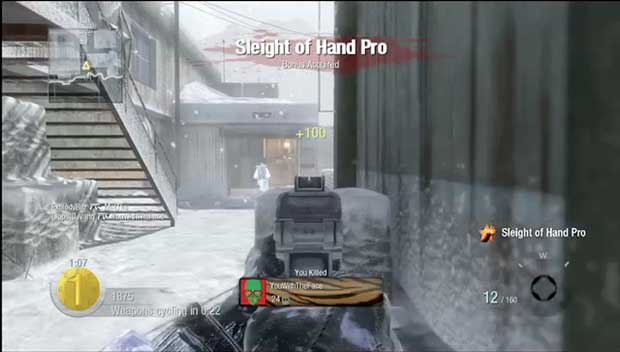 Treyarch has revealed the first details on the multiplayer modes for Call of Duty: Black Ops, including a series of “adrenaline junkie” game modes it’s calling “Wager Matches.”

These four free-for-all game modes have players wagering their in-game currency, called “COD Points,” gambling that they will come in within the top three in any given match. Players who are in that top three are said to be “in the money,” and will get paid out at the match’s end; those who aren’t will lose it all.

The “One In The Chamber” mode starts every player with a single pistol and one bullet. By killing another player, you’ll gain their bullet; miss and you’re out of luck, stuck with a melee weapon for the remainder of the match. “Sticks and Stones” has players equipped with a crossbow, ballistics knife, and a tomahawk. By throwing the tomahawk at a player and hitting them, you’ll cause them to go completely bankrupt.

“Gun Game” is a match type Treyarch says came from ideas within its community, a progressive weapons match that starts players off with a pistol. With every kill, players will progress to the next weapon; get knifed by another player, however, and you’ll be set back one tier. The final mode, “Sharp Shooter,” starts all players with the same randomly selected weapon. After a certain time period, every player’s weapon will then cycle. In “Sharp Shooter,” each kill earns players a perk, and a eventually a score multiplier.

These modes are an interesting twist on multiplayer, and should be a nice reprieve from the progression-based competitive play which you’ll still find in Black Ops. Matthew Razak had a chance to not only play Black Ops multiplayer, but also speak with the folks behind the game for an even closer look at what we can expect when the game launches on November 9. Stay tuned.