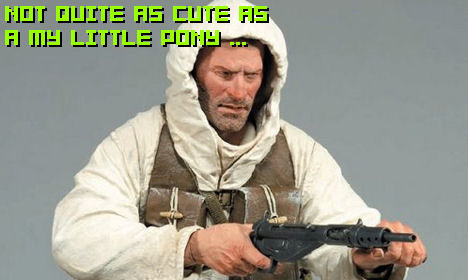 Fresh from announcing its Guitar Hero action figures (no Grim Ripper = fail, by the way), the McFarlane Toy company is also planning to bring out some Call of Duty: World at War figures this fall. The toys are set to release around the same time as Treyarch’s sequel, and are due to be a set of four.

The above image is the first revealed figure, which MTV Multiplayer was given the first glimpse of. You can see a full shot of this British Special Ops soldier down below. The full set will include the following happy campers, all of whom are probably as handsome as the Brit:

Certainly not an idea for a toy line that I would have predicted, but an interesting choice nonetheless. Looks like Activision is all about the action figures right now, so expect a range of McFarlane Tony Hawks in the future.