And built a new esports arena

University of California, Irvine announced its esports initiative in the spring: build a gaming arena and give out, “as many as 10 academic scholarships” to students on its League of Legends team. It was apparently a good fit for the university, where “72 percent identify as gamers and 89 percent support the creation of an e-sports team.” It was even ranked the “No. 1 school for gamers in 2015” by College Magazine, which is apparently a real publication and not a Simpons sight gag.

Of substantial more interest to me, however, is the Business Insider article, “This California university will pay half your college tuition just for playing video games,” mostly because it’s more of a slideshow prefaced by a couple paragraphs of non-information. I did learn that the folks at Irvine ruined a perfectly good pool hall to build this atrocity of 70 gauche chairs that start at $300 a piece to go with 70 $2,000 gaming rigs, “which includes top-of-the line graphics cards and processing power.”

But while the photo captions make much of the cost, it’s also noted that all the pricey equipment was donated, which I guess it why there’s a separate picture of a Logitech keyboard/mouse and a Logitech headset.  Additionally, it’lll cost students $4/hour to use the facilities, so it might even make money beyond its corporate sponsorships. Maybe that’s paying for those 10 scholarships?

Well, actually, according to the more recent Business Insider article, “UCI is bringing in five students on the new scholarship, four of whom weren’t even looking to attend. It covers about half of in-state tuition.” The other five League team spots are up for grabs with an open tryout.

If you are a California resident, attending UCI costs about $32,103 per year. Tuition is $14,750, so if these are half-tuition scholarships, your sports medicine degree with a focus on esports will only cost you $24,728 per year! (Out of state tuition alone is $40,000/year).

So, sure, this scholarship is only pittance off ballooning higher education costs in the United States, but, hey, you get some money for playing games! And if you’re a student there, you have access to gaming PCs — with things beyond League.

“And other gamers in the UCI arena will be able to play pre-loaded titles such as Diablo 3, Overwatch, Final Fantasy 14, and Minecraft,” Business Insider notes, followed by a still image of El Diablo from Suicide Squad. What!!! Why? I don’t know! 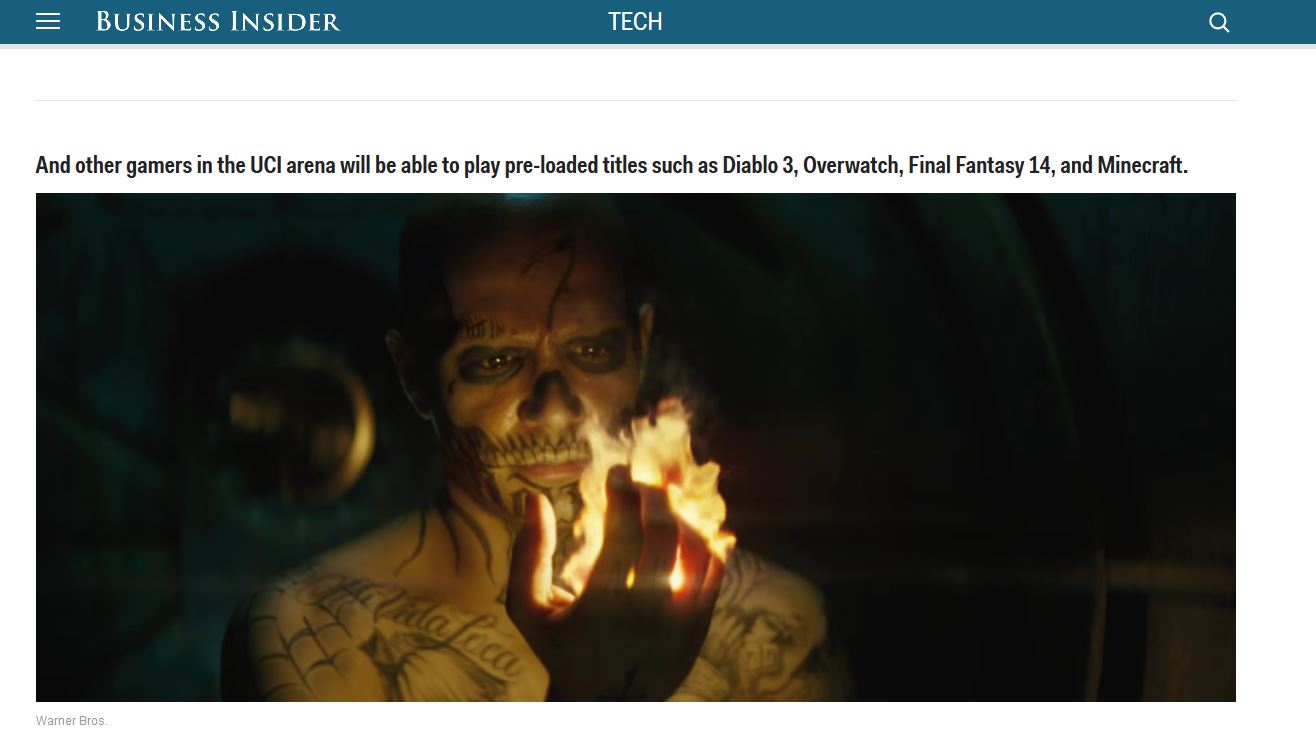 I’ve not seen the movie and don’t know shit about 99% of comics, but I’ve been told this cat is supposed to be an Aztec fire god and he, up until joining the squad, had been using his Aztec fire god powers to be a really shitty, low-level drug dealer. Makes about as much sense as him coming up in this article, which is just dozens of pictures of cardboard boxes filled with Asus monitors

This California university will pay half your college tuition just for playing video games [Business Insider].

Filed under... #California#eSports#League of Legends