I’m sick of messages from the front. Don’t we ever get a message from the side?

It probably looked like I was in the mood for shovelware the day I picked up 2002’s Seek and Destroy for PlayStation 2. The cover is a bizarre composition. A tank bursts through the background, firing a shot at some far-off and unseen target, all the while American flags wave. You wouldn’t guess that this abomination concealed a game about Japanese toys.

Seek and Destroy is actually a member of the Choro Q series of games. I spoke fondly of another game in the series, Road Trip, a few months ago. I have a soft spot for the games. I’ve never laid eyes on one of the actual toys, but the way they were translated into the medium of video games has been weird and fascinating. Talking vehicles and a focus on customization largely sum it up.

But while most games in the series focus on racing, Seek and Destroy is unique in its concept: warfare. Road Trip was a pretty chill game about earning parts by questing and using them to win races, all in an effort to become president. Tanks aren’t typically chill, and Seek and Destroy has none. Chill, I mean. It has a staggering number of tanks to unlock, but it has the patience of a juvenile wolverine.

Known as Shin Combat Choro Q in Japan, the story involves the Empire of Q-Stein invading its neighboring countries. As a rookie member of the Proton Army and also the only competent person (tank?) on the continent, you’re drafted to fix absolutely everything.

Gameplay is largely tank-on-tank action, but with downtime in between levels. You go off to a mission anti some tanks, then you can do some shopping around town and take on the arena for some extra dosh. Said dosh then goes towards buying parts for your tank. You also unlock new tanks by completing missions and winning arena challenges. They’re historical tanks that are taken from various countries and time periods. You Panzers, Shermans, and T-34s are all here, often with different variations. There are supposedly over a hundred to unlock, which just seems crazy. 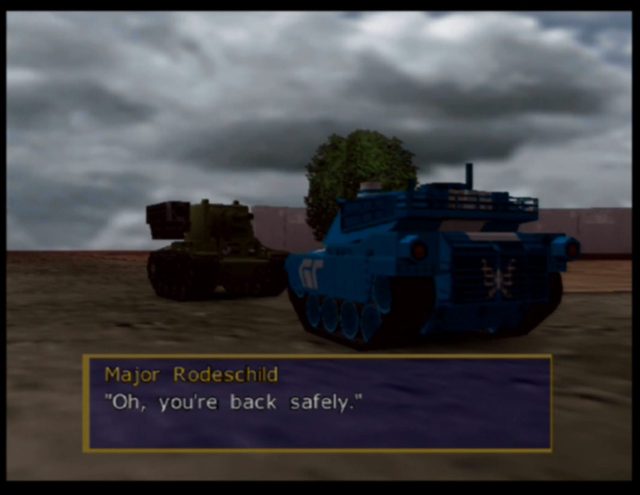 Speaking of crazy, Seek and Destroy is a pretty bizarre little game. Ignore the fact that the characters are all talking tanks – Okay, actually, let’s talk about that. All the characters are talking tanks. What happens when you switch out your tank model? Everyone still recognizes you as the same tank, so where does tank consciousness start? Where does the individual stop and the tank begin? Also, why can’t I have outrageous colors like some of the characters you talk to?

Despite having a bunch of historical tank models, that’s where its connection with reality ends. The equipment available for you to buy starts off with basic shells and machine guns, but quickly this gives way to lasers and other exotic accouterments. Then you turn your tank into a boat and fight battleships. Then a plane is getting away, so your commander slaps some jets onto you and it’s off to the sky for a dogfight. The unfortunate part of all this amazing over-the-toppery is that Seek and Destroy is both extremely easy and staggeringly short. To be fair, if you spend a lot of time buying up equipment and collecting tanks, you can extend the gameplay, but if you just tackle the missions, it’s not going to last you.

Any challenge can be overcome by going back to the garage and changing out your equipment. It’s not that complicated about it either, you just need to know what you’re going up against. Even some basic heavy equipment will get you pretty far in most situations. It doesn’t help that most of the gameplay is just targeting the enemy and then driving circles around them. The AI isn’t terribly aggressive, so death comes slowly.

Don’t get me wrong, it’s fun to play, but it’s a greater-than-the-sum-of-its-parts kind of deal. There are good times to be had decking out your tank, and the rewards come quickly, but when it’s actually time to play the game, there’s not much meat there. Some of the boss battles are pretty awesome, but there’s not much challenge to them, either. Also, the translation sucks out loud. 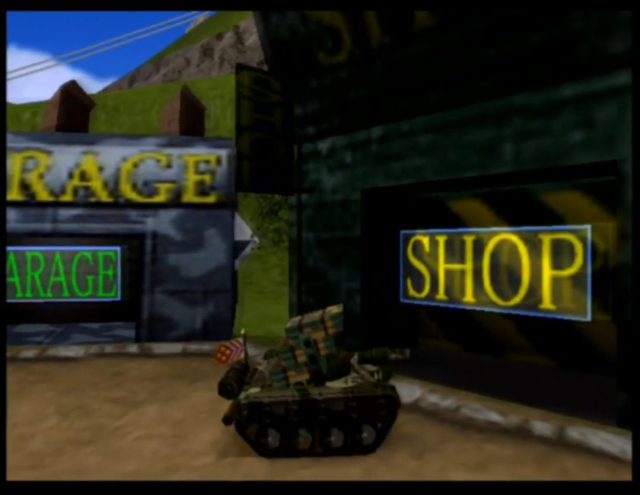 I think I love the idea of Seek and Destroy more than the actual game. If someone were to take all the concepts laid down here, polish them up, and modernize them, then I’d be all aboard. There’s just something interesting about taking a dour genre like tank combat and slathering on a layer of whimsy. It’s a fun addition to a genre that usually lacks it.

It’s not Battletanx, however. Whereas Battletanx was a game where a rock-solid concept was built upon, Seek and Destroy feels more like a lot of good ideas thrown into a bucket and churned around without much concern for balance. But does Battletanx let you strap rocket boosters to your tank? No. But it does have a weapon that is literally just a nuclear bomb.

What I’m saying is you should play both Seek and Destroy and Battletanx.