I’ve long wished for the perfect road trip game. Since the early days of 3D, I’ve wanted the open road, not for racing, but for travel. I’m still searching. There is certainly a share of games about driving, but none have completely satisfied my craving. Euro Truck Simulator 2, My Summer Car, Jalopy — they’re all just missing that special sauce.

It took me quite a while to come across the aptly named Road Trip. The title was introduced to me by a Destructoid community member and I hurried to seek it out. It wasn’t just the title, it was also because it was part of the Choro Q series. Choro Q is a long-running racing franchise based around the toy cars of the same name. We got some of the games over here under titles like Penny Racers, but many didn’t leave their homeland.

Regardless of how familiar you are with the Choro Q series, Road Trip was a pretty bizarre departure. 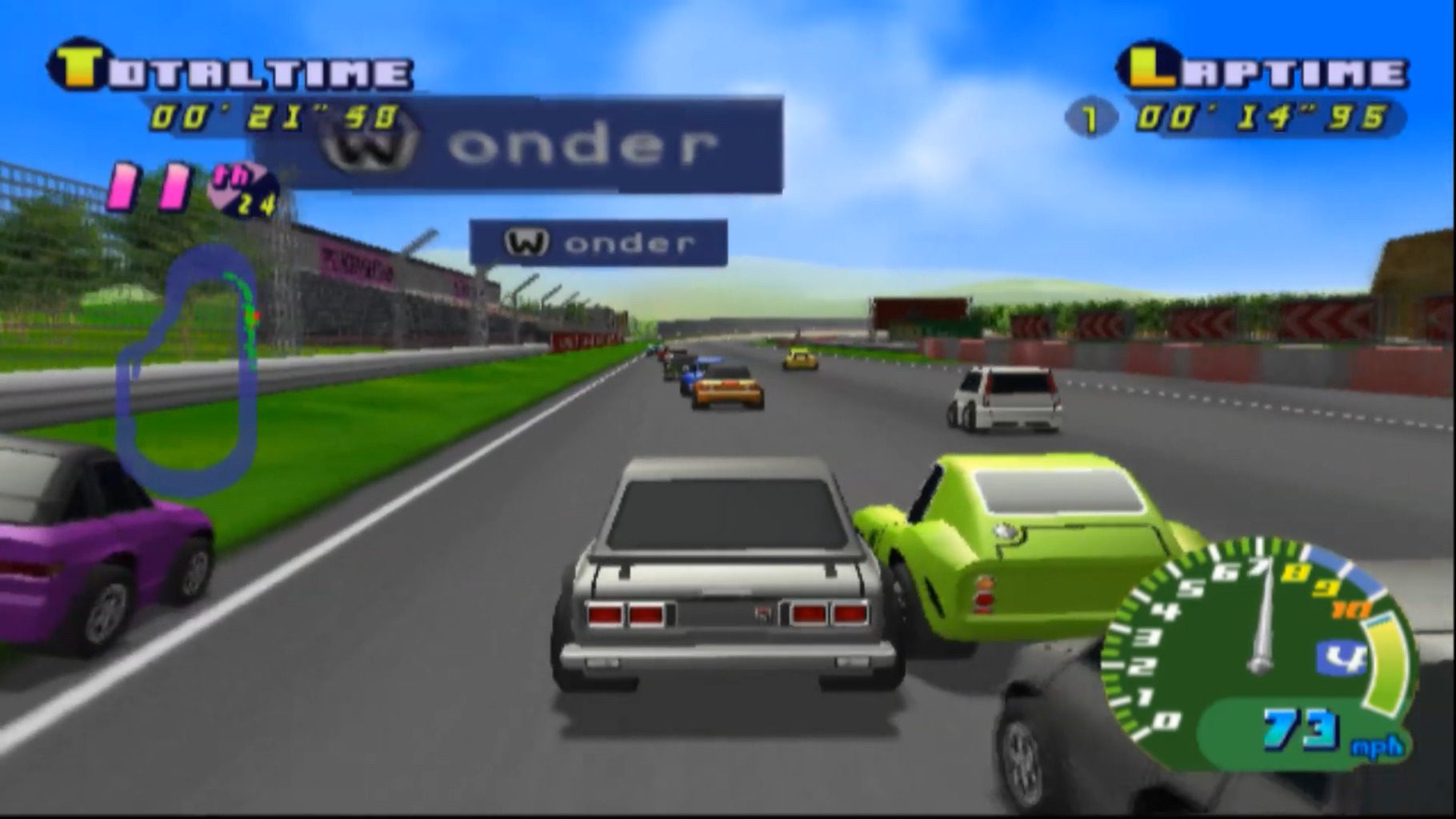 Choro Q started off as a pure, light-hearted racing game based around the series of toys. As the Playstation years wore on, it began to mutate in various ways, and I’d say it peaked — but didn’t end — on Road Trip. Known as Choro Q HG 2 in Japan, it’s technically the sequel to Gadget Racers in North America. However, while Gadget Racers was a pure racing game, Road Trip is… something else.

It’s an… uh, adventure. It’s like if you replaced Zelda’s dungeons and puzzles with racing. Not quite an RPG, but certainly with elements of it.

It takes place in a rather large, seamless world. You drive around doing quests and completing the races offered in each of the various towns. Quests, yeah. Like you drive into a house and the car who lives there is like, “Hi, I need a peach to make wine, go get me a peach,” and you go do that biz. And yeah, the cars are the characters. They talk. There’s no indication that there are humans anywhere, especially not behind their wheels. This is a world inhabited by cars. Maybe all the people died of carbon dioxide poisoning because they were keeping their cars in their houses. 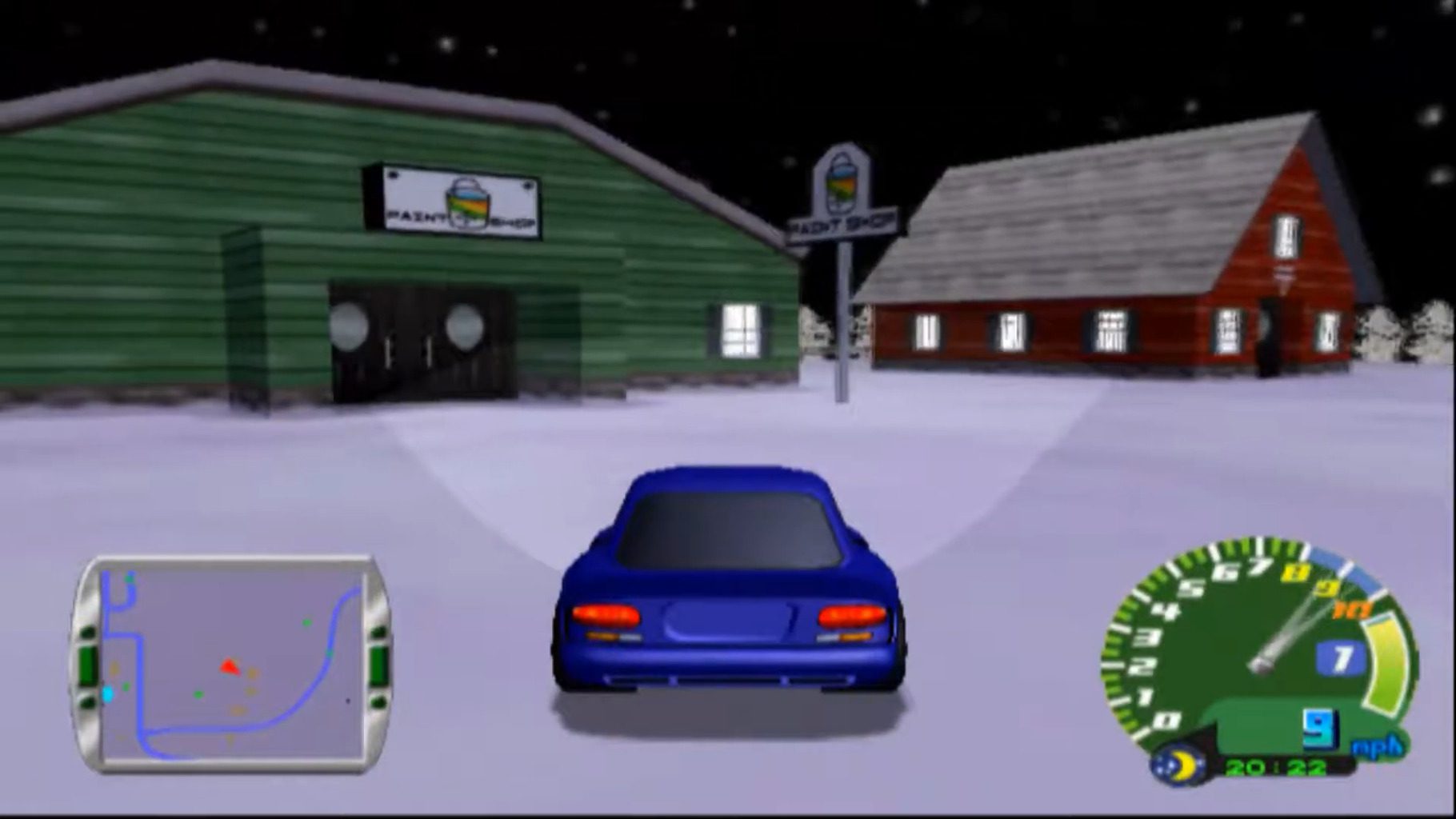 And what a world it is. You start out in a little country town, and the very next locale is a classic, Edo-era Japanese city. Each one is themed, unified only by the fact that they have a Q-Factory that lets you swap parts and race.

See, there’s a central goal here, and that’s to win the championship and become president. Apparently, the current president isn’t too keen on the job and wants to hand it off to whoever races the best. I guess in a world of cars, racing prowess is perhaps as good a metric for judging leadership as any.

You need to upgrade your license, and to do that you have to clear all the races at your level in each of the cities. Once it’s upgraded, you do it again a couple of times until you can challenge the president. Rest assured that fast travel opens up if you’re not the type to enjoy the open road, but if you’re like me, driving around the world is part of the fun. 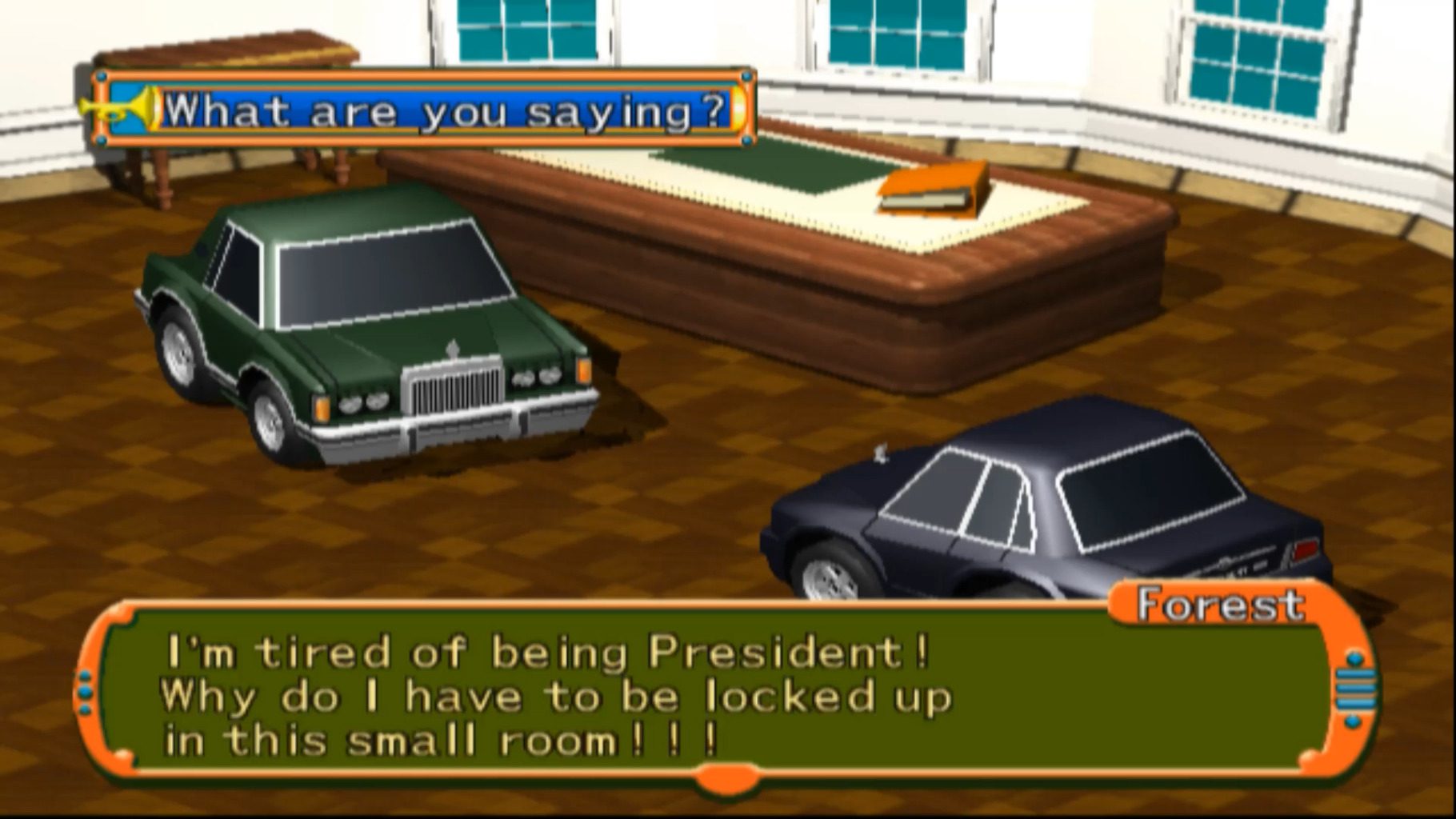 There’s a lot of incentive for completing quests and gathering collectibles. It’s the main way you unlock new parts and partners. You can upgrade and customize your car to the nines, and recruit two partners to help secure victory. Oh, you also have to customize your two partners. Vexingly, there’s no way to tell what partners are worthwhile. The ones that talk a big game, are they better than the shy ones that say please?

That also means you have to buy parts for them, and the best parts can get expensive. That means you’ll be playing the same races repeatedly, and since they all pay the same, you’ll probably be seeing Peach Raceway more than you’d like.

Speaking of the best parts, getting them requires a lot of collecting. There are coins, photo booths, and stamps, and the game kind of expects that’s where you’ll be spending a lot of your time. I’m not joking when I say that you’ll need all of one of the above to get parts that are probably required to actually compete in the big races. Unless you’re a lot better than me, which you might be. 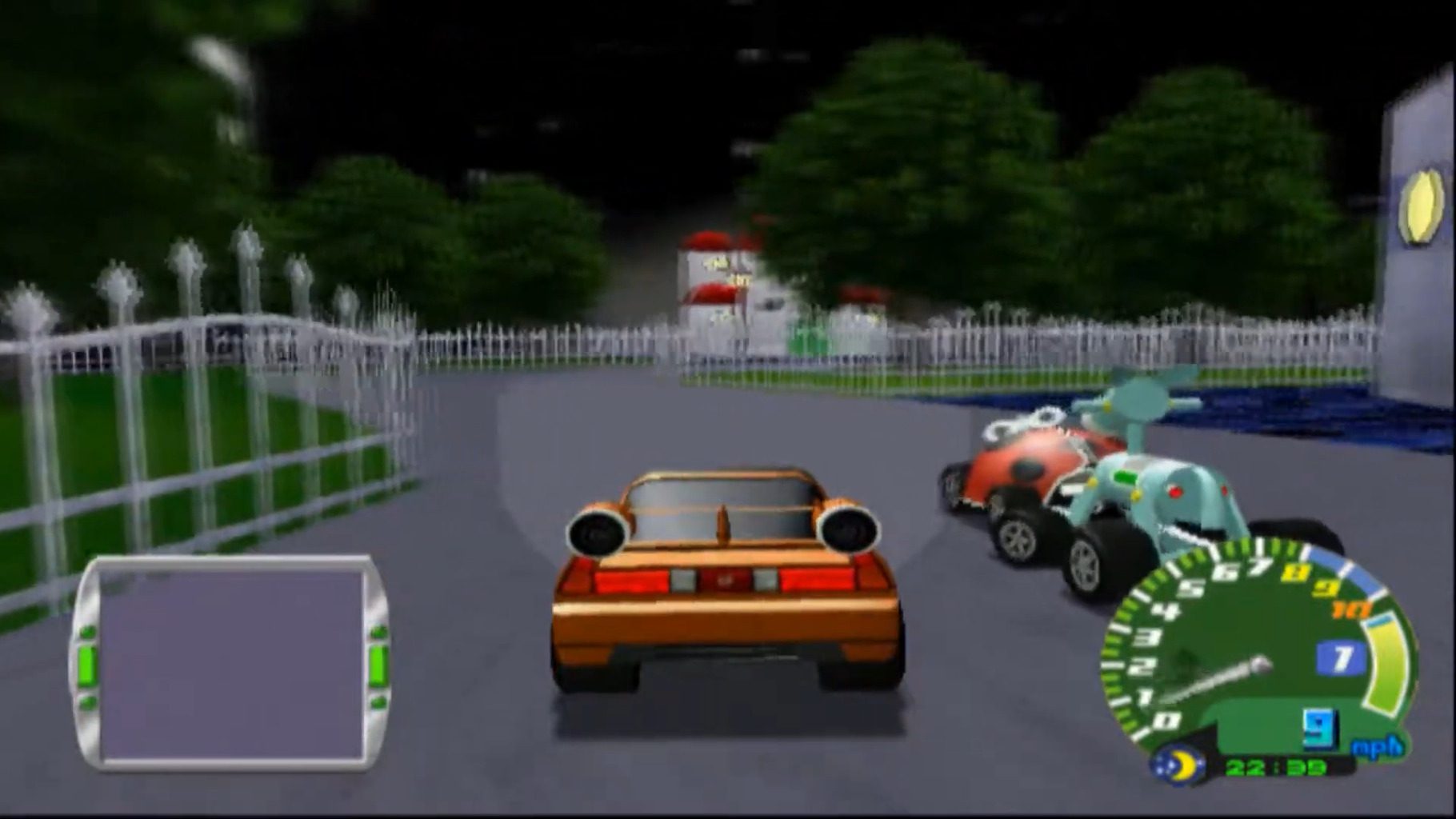 You have to be in a certain mindset for Road Trip. If you want a racing game — and this may sound strange — look elsewhere. Choro Q, despite the prestige of the name, isn’t a very good racing franchise, mechanically. They’re loose, clunky racers. They’re mostly saved by the depth of their customization options, but I’ve never found that it feels great behind the wheel.

No. Instead, you’re more likely to get a kick out of the game if you’re feeling laid-back and just want to drive. There’s no real traffic, just a lot of empty road. In each area, you’ll be scouring for collectibles, and the game is so set on you grabbing them all that you can get hints in various places around town. Need to find a photo booth? Find the previous one in the sequence, and it will tell you where the next one is. Not sure if you have all the areas coins? Hit the bar, the guy there will tell you.

Racing happens, but the best strategy to winning is to have better parts than your opponents. Can’t win? Time to upgrade. Find the shop that sells the best transmission or tires, then get back out there. That’s not to say that skill doesn’t come into it, but the actual driving is so clunky that the ceiling is low on what you can do behind the wheel. 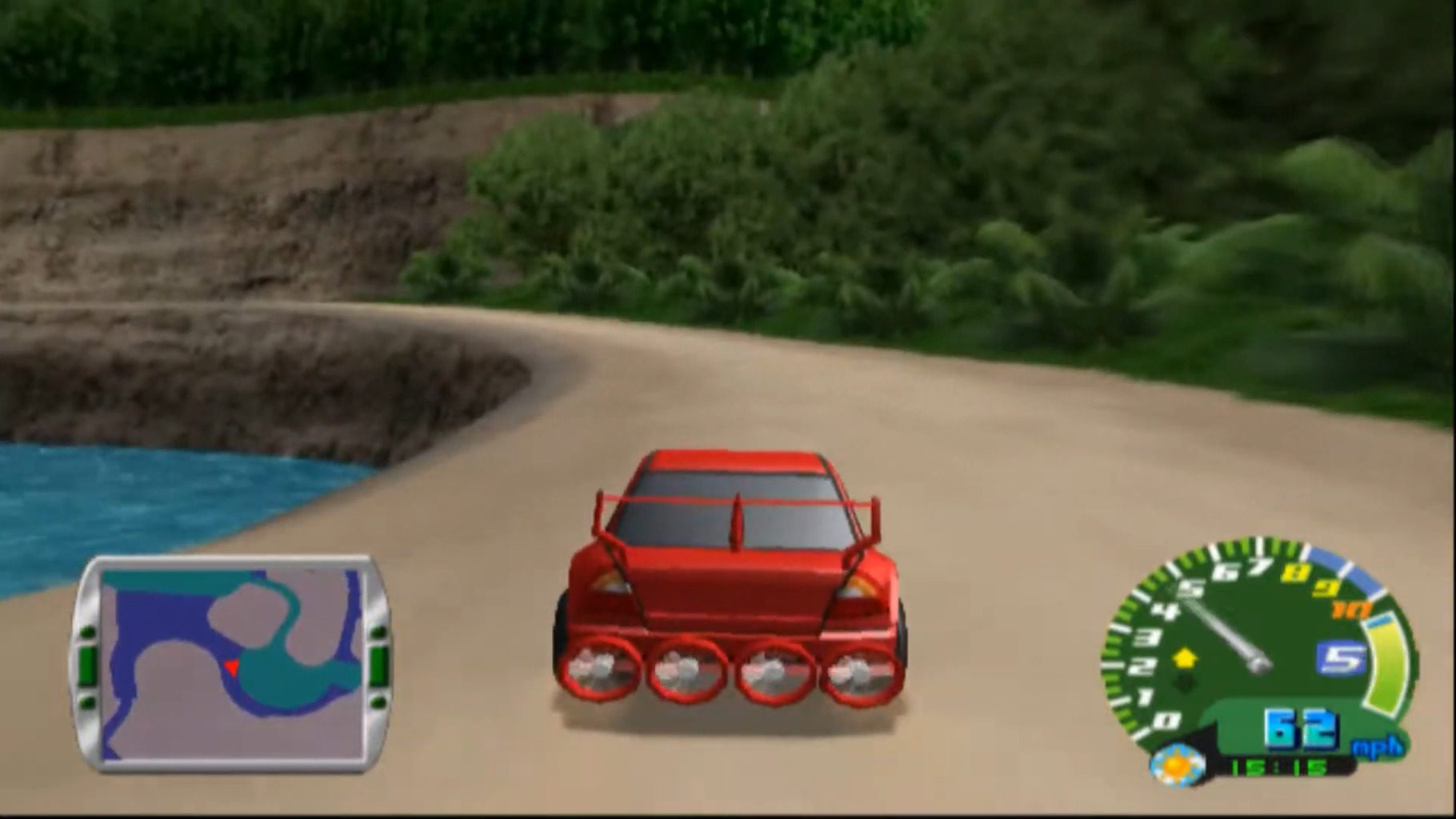 If you haven’t really picked this up, it’s a weird game. Beyond just a wide variety of car bodies you can equip, weirder ones become available. Want to drive a snail with monster truck tires? Say hello to president snail. An ice cream truck, a bus, a train. If it can fit on four wheels, you might just find it here. And there’s no real downside to choosing them, as the body doesn’t affect the stats of the vehicle.

There’s also a city that you build by finding people looking for a change in their life. There are usually a few cars roaming around in each area that are bored with life and just want to live in a city where they can do what they want. The result is a mish-mash called MyCity, and yeah, that means there’s yet another thing to collect: sad people. 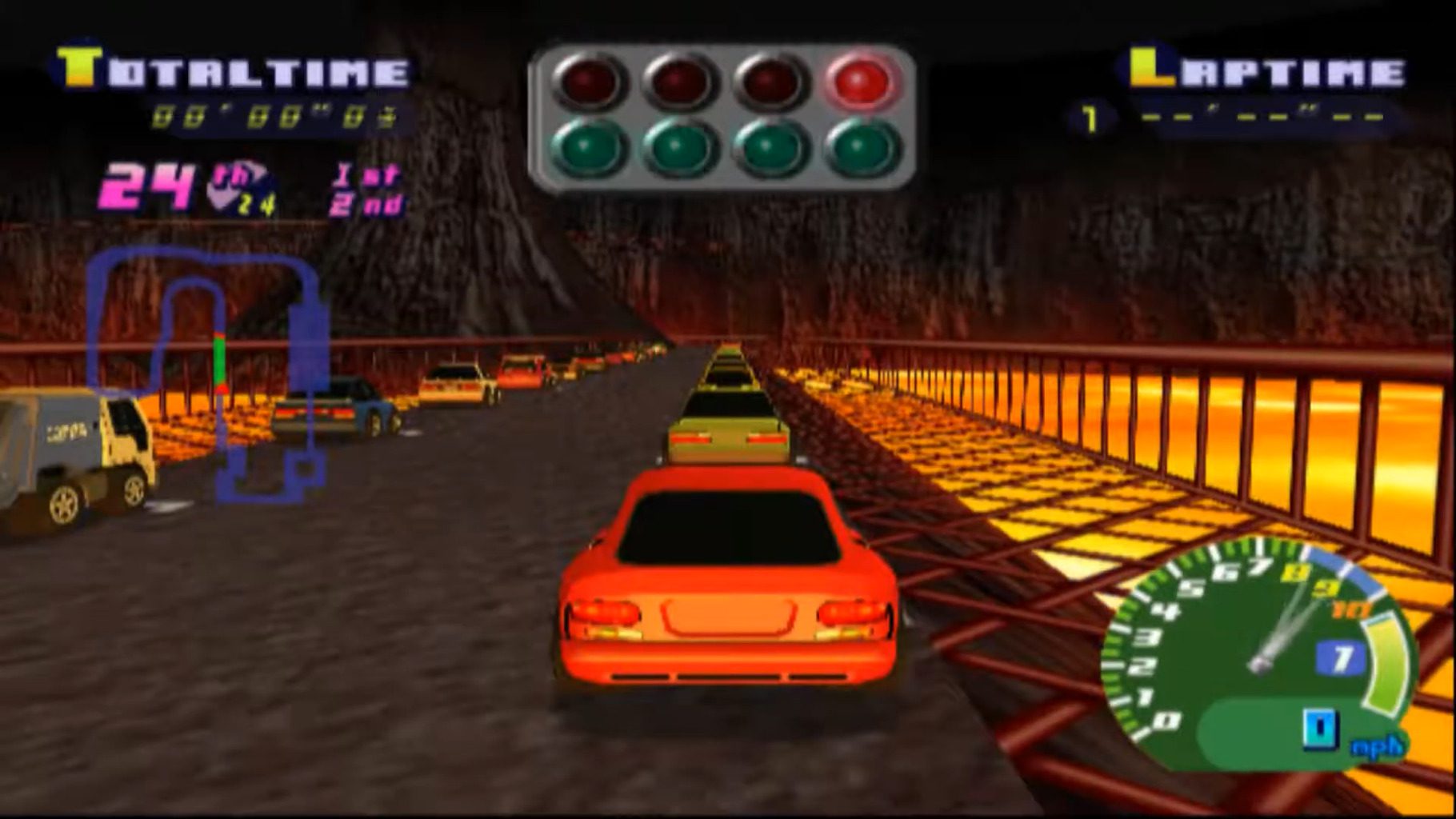 Choro Q isn’t the most well-executed game, but it is still very special. It’s relaxing to me since I can swap between questing, racing, and collecting out in the open world. It’s also extremely positive and quirky, this little fossil-fueled happy place.

The series would continue, but not necessarily in the same direction. Choro Q HG 3 was similar but more restrictive. Choro Q HG 4 was a full RPG — a car PG, as they put it (that’s actually pretty clever). Aside from that, it was mostly racing, and whether or not they got localized was a craps shoot. A 2012 mobile release was the last time we saw the series.

The series has always been charming, but rarely actually good. It would be nice if Tomy revisited the franchise, but that wouldn’t guarantee we’d see it over here. I just want more of my weird toy car games, and if someone wants to put them back in a stupid open world, that would just be gravy. Could we at least get a port? A collection? Is that too much to ask?