Why couldn’t this have been Twisted Metal III?

2012 was a pretty bad year. Your crazy co-worker was right, and the world was laid waste to by Mayans or something. Corporations were quick to rise from the ashes to monetize our misery. Big Daddy, for example, rebuilt the United States into a massive tourist attraction. Relive the days before the catastrophe in luxury and see the sights!

But the gig economy won’t be kept down. Automercenaries compete to the death to show vacationers around the exploited remains of the country. Have you considered putting your life on the line to shuttle the bored middle-class around the newly veneered monuments of this dystopian hellscape? 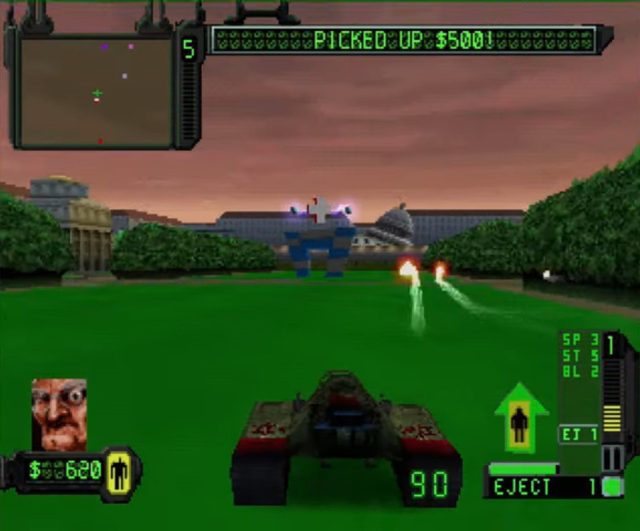 That’s my embellished take on the plot of Rogue Trip: Vacation 2012, though it’s rather accurate. It’s a vehicular combat game that actually involves giving tours.

Rogue Trip was developed by Singletrac after their contract with Sony expired and they were left without any Twisted Metals to work on. Instead, they took it upon themselves to further embarrass 989 Studios’ Twisted Metal III the same year as Vigilante 8. It has pedigree, with many of the developers from Twisted Metal and its sequel working on it. No, not David Jaffe.

All the same, you can easily see Twisted Metal in Rogue Trip, they just added an extra twist to it. If you went from Twisted Metal 2 to Rogue Trip, you’d probably feel right at home. The weapons all seem familiar, the controls are practically the same, and you know those directional pad combos that activate things like shields? Yeah, those are still here. And they still suck. 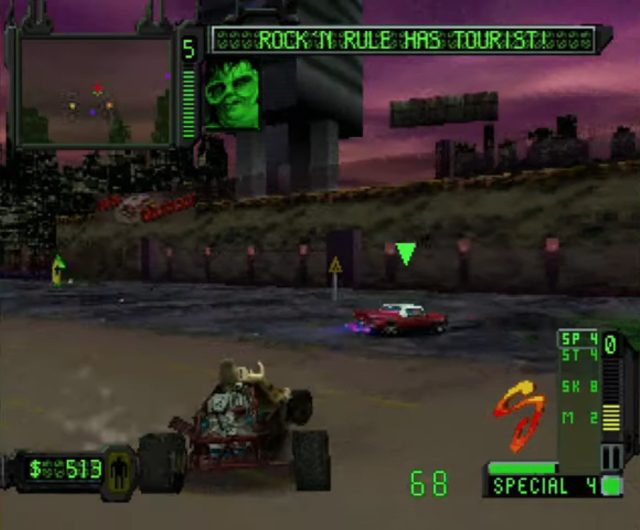 The edge has been taken off. Sort of. Remember how the first two Twisted Metal games had an unsettling quality to them? Rogue Trip is a lot goofier. One of the characters is a chef that drives a hot dog. Another is a cross between Batman and Mickey Mouse. A swarm of angry poodles is one woman’s special attack. It’s not all flowers and good times, but it’s a heck of a lot brighter than Singletrac’s previous games.

The other big change is in the economy. The tourists are there as a sort of a take on capture the flag. You need to grab them, take them to the various sights around the arena, and rack up some cash. If another driver gets hold of them before you do, you either destroy them or use a weapon to eject the tourist and grab them before someone else.

Make no mistake, however, the name of the game is still to be the last one standing. It’s not a complete reinvention of the genre. The money can just be used to repair your vehicle and upgrade your weapons. If you want to just go ham on your opponents and throw whatever you can grab, I’m not sure that’s the soundest strategy, but have at it. 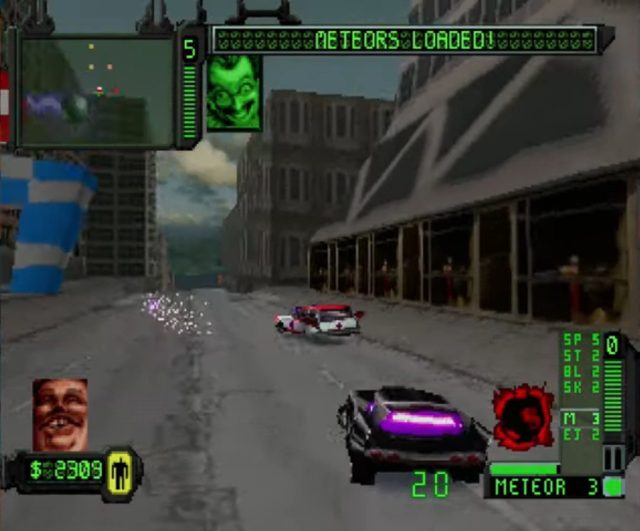 You travel from Washington D.C. to Las Vegas. Grotesque versions of them, anyhow. Big Daddy generally features heavily in the scenery. It’s his America, after all. This game suddenly feels quite topical.

The levels are, thankfully, more of Twisted Metal 2 quality than Twisted Metal III’s dismal offerings. They provide the same sort of opportunities for destruction, though I don’t remember seeing anything as awe-inspiring as blowing up the Eiffel Tower. Still, the very fact that you need to show a tourist around ensures that there are interesting things to fill your eyeballs up with.

One deficiency it has against the Twisted Metal games is arguably its cast of characters. Twisted Metal seemed to have something for everyone — bizarre, creepy, heroic, villainous, cool, stupid — Rogue Trip is mostly just bizarre and stupid. A flamboyant wrestler, a sexy nun, a grotesque Elvis. You’ll probably pick the guy who drives the weiner-mobile, because when all you have is weird to pick from, you might as well go for the weiner. 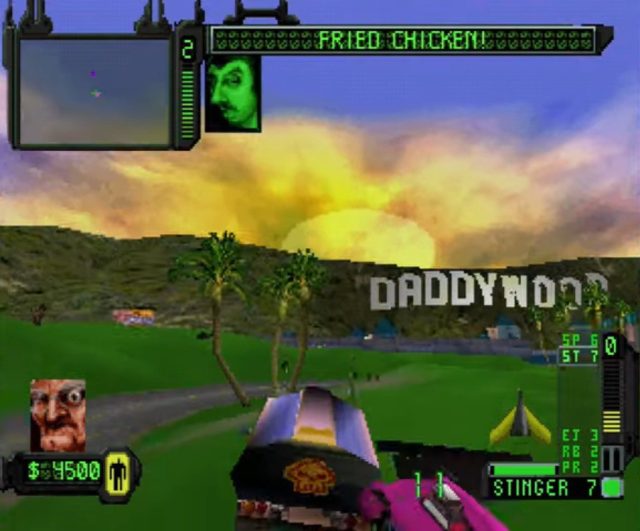 Rogue Trip doesn’t really do anything new for the genre, which is probably why it got buried by Vigilante 8. The tourists don’t really add all that much. You don’t want to completely discard that little divet of gameplay, but I never really used the weapon upgrade system. I usually just kept my cash for repairing my vehicle.

The soundtrack is going to divide people because it heavily features ska. The Mighty Might Bosstones are pretty prominent, to give you an idea of what you’re looking at. I personally don’t mind ska, but I know some people look at it as sewage flung from a trumpet, so I feel I should at least offer a warning. You could always crank down the music and listen to, I don’t know, Rob Zombie. 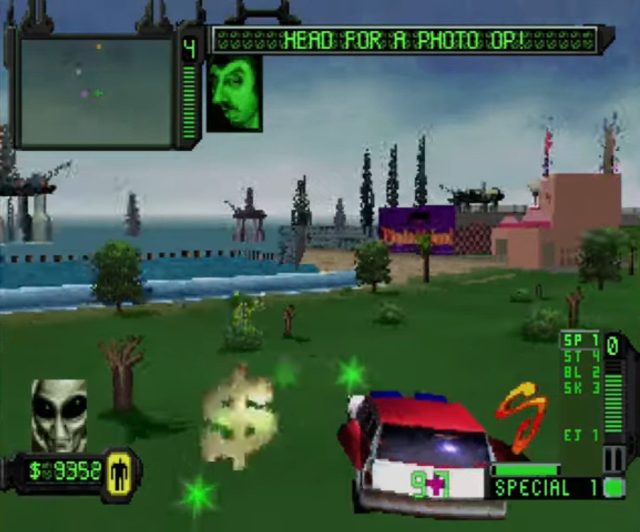 In a perfect world, Twisted Metal III would have been shunned completely and a pedestal would be erected for Rogue Trip. It’s not perfect, but in the absence of an actual good Twisted Metal title in 1998, it deserved the attention. That’s just the power of the brand, I guess. This was the height of the vehicular combat genre, and while Rogue Trip wasn’t the apex, it definitely belongs at the cool kids’ table.

It’s really worth playing if you enjoy the ‘90s era of vehicular combat games. I say that as if there’s a modern era. Hold on, I’m going to try and think of the most recent game released in this particular sub-genre. Uh, Carmageddon Max Damage. Does that count? How about Gas Guzzlers: Extreme? Help me out here.