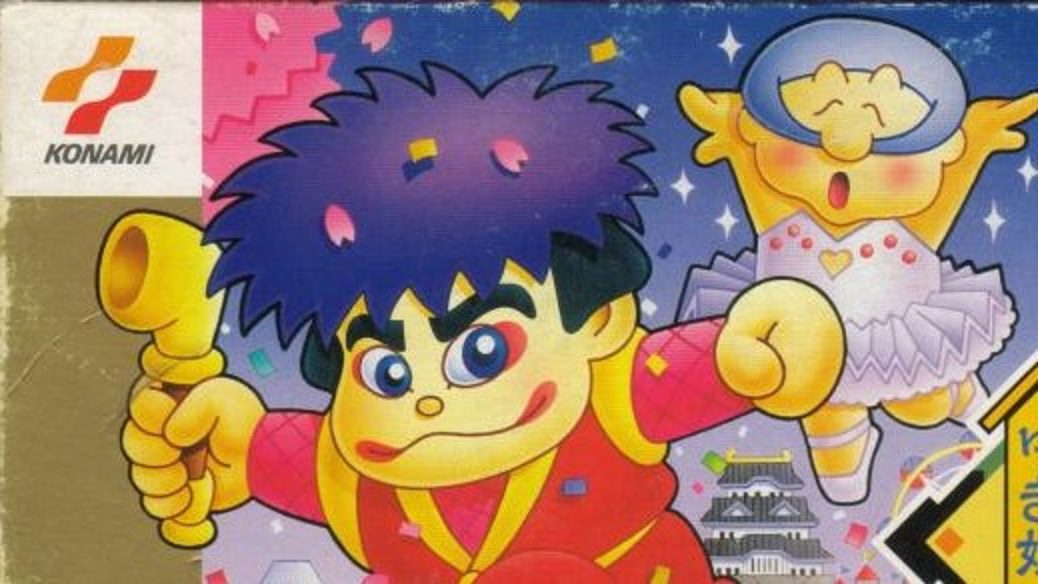 I frequently try to remind everyone who comes within earshot of my love of the Ganbare Goemon series. I barely even knew it was a series until adulthood, but I was first introduced to it in my youth. Legend of the Mystical Ninja was one of the small handful of Ganbare Goemon games that we actually received in North America, and it was a favorite of mine to rent and play with my mother.

It was, well, mystifying to my young mind. It was long before Japanese culture seeped into my consciousness, so concepts like Yokai, mechanical Ninjas, and the geography of Japan were completely (heh) foreign to me. But it was amazing! There’s so much to explore and do. The number of side activities is dizzying.

But, I’m getting ahead of myself. Let’s celebrate the successes of Legend of the Mystical Ninja, recognize its failures, and opine the fact that the West got shafted when it comes to Ganbare Goemon games. 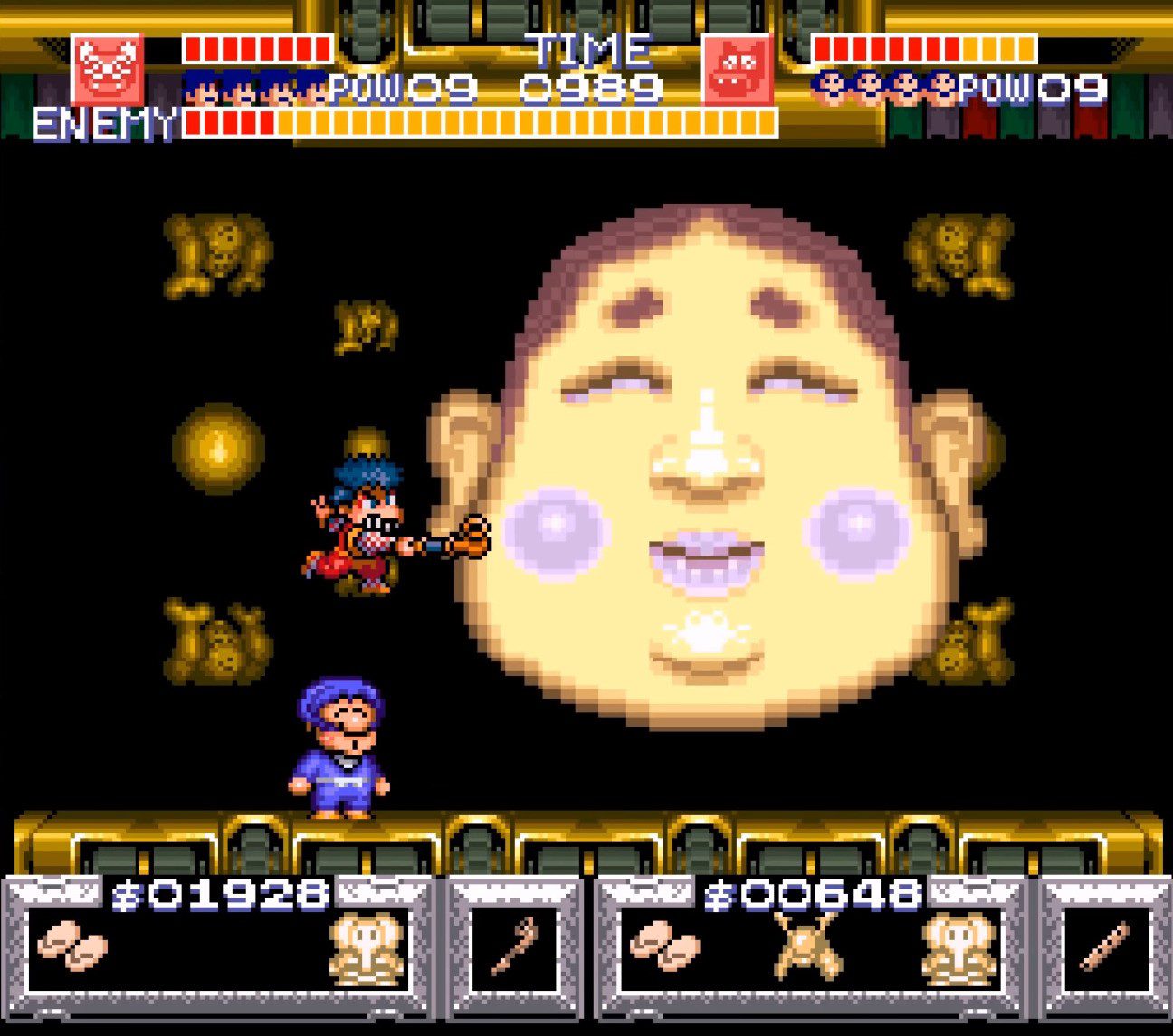 Legend of the Mystical Ninja is the third game in the core Ganbare Goemon series, technically. It’s also sort of the fifth title in the franchise, but if you remove the RPG Ganbare Goemon Gaiden, and the arcade title Mr. Goemon, it’s the third. It’s also the first one on the SNES, and this was released in 1991, and also this is Konami, so they tried to pack in as many graphical tricks as possible.

The story starts off with Goemon and Ebisumaru (I’m sorry, the translation refers to them as Kid Ying and Doctor Yang, which is borderline offensive, so I’m not going to call them that) as they investigate a ghostly occurrence. This snowballs to the point where they’re traveling all over Japan to save the princess. That may sound routine, but this was really the first time Ganbare Goemon delved into save-the-princess territory. First, Goemon was trying to stop an evil Daimyo, then they were out to steal a treasure, so this is sort of the first time that Goemon was depicted as a hero, rather than a noble thief. 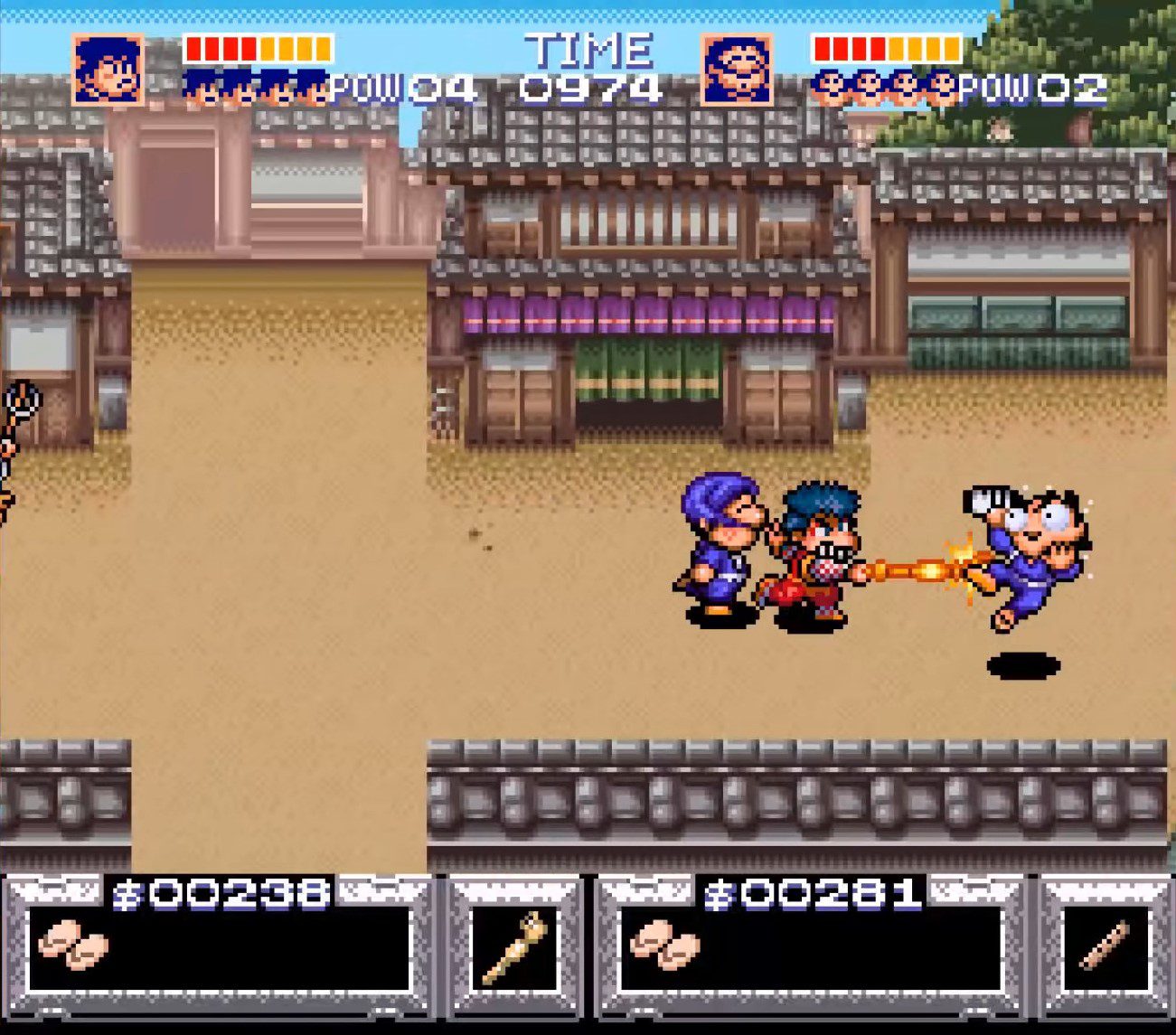 The progression of Legend of the Mystical Ninja is rather unusual, to say the least. The first game had a rigid “find three passes to finish the level” structure, the second sometimes dropped that in favor of boss battles, but here, there’s no solid end to a level. Sometimes, you’re whisked away after beating a boss, but other times you quite literally have to go to the travel agency and book a trip to the next area.

Otherwise, the actual gameplay is similar to the Famicom Ganbare Goemon games. You run through towns and people attack you. Dropped is the necessity of finding invisible holes in the ground, but added is sidescroller levels. Rather than just being a strange perversion of the beat-’em-up formula, there’s actual platforming required here. It’s interesting how they went with this, but it was a few months until The Legend of Zelda: A Link to the Past would hit, and the series wouldn’t copy that template until the third SNES title.

It works, though, even in co-op. A feature was added where one player could mount the other. This means you can carry players less skilled in the ancient art of landing in the right spot over tricky areas. It’s especially important in taller platforming sections, because if one player falls over the other player’s screen, it’s instant death. Being joined at crotch and back means that you fall together and no one dies. 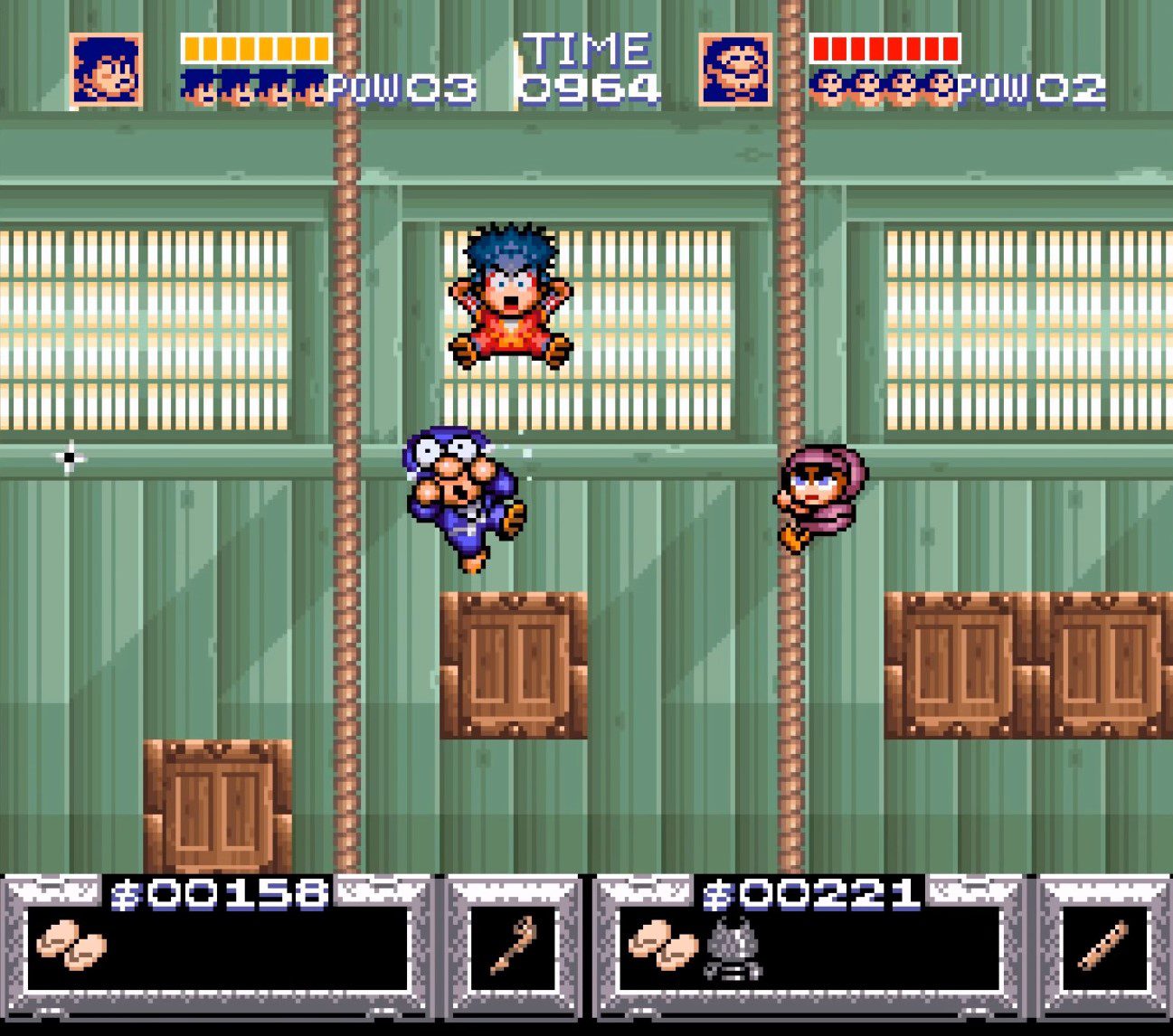 I mentioned distractions earlier, and Legend of the Mystical Ninja is probably the series pinnacle for mini-games. There’s a tonne. Some are straight gambling, some pay out depending on your skill in the game, and others are actually just bite-sized pieces of games like Gradius and Arkanoid. There are times where you’ll badly need a cash injection, and some of these games provide that. Or you can just go outside and beat up bad guys and touch women for money.

However, my previous statements also mean that Legend of the Mystical Ninja is massively unfocused. It’s really an everything-and-the-kitchen-sink approach. A lot of its facets are superfluous bloat. There doesn’t need to be so many ways to heal your character. Restaurants, inns, onsen, it’s just the game’s way of being quirky. You can also learn Jutsu that are pulled off by spending scrolls, and they’re novel but unnecessary.

Really, you can just speed your way to the action stages. Considering you’re most likely going to drop a life at either a boss or a bottomless pit, skill will get you further than the level’s fanciest armors and magic. You don’t need to stock up on supplies; it’s all doable with a beefy pair of thumbs. 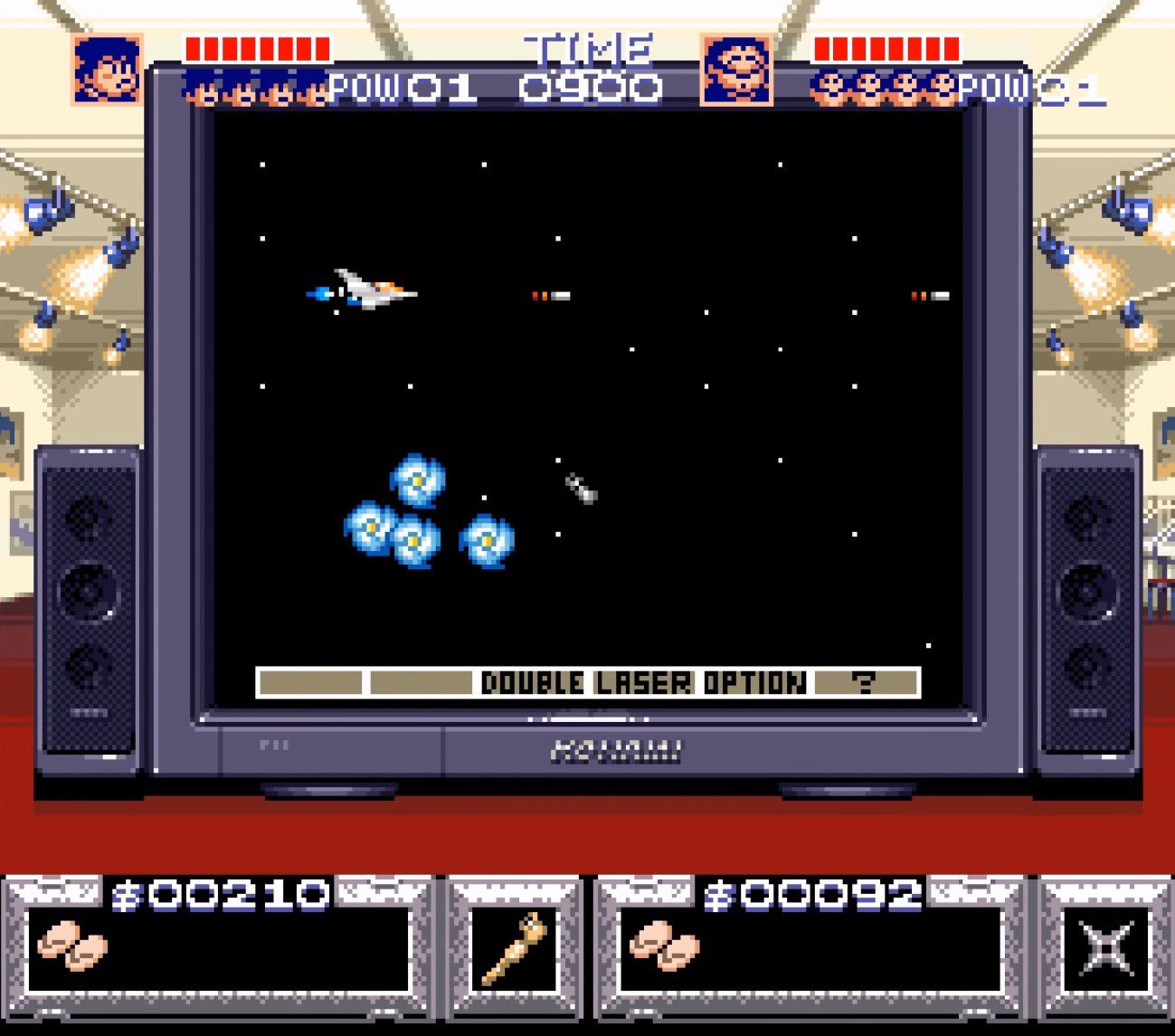 Not that I’d advocate for the removal of these admittedly pointless facets. Part of what I love best about the Ganbare Goemon series is that it can sometimes feel like tourism. You go to the next level, take in the sights while smacking bad dudes, then move on either richer or poorer. It will take you significantly longer to reach the end, but you’ll at least have the experience.

It helps that the graphics pop and the soundtrack is stellar. Even the title theme hits you in the gut with a traditional Japanese punch. The mix of Japanese folk instruments and techno filtered through the SNES sound chip is just divine. Not really surprising considering how amazing Konami’s sound team was at the time, but it’s a pleasant bonus all the same. 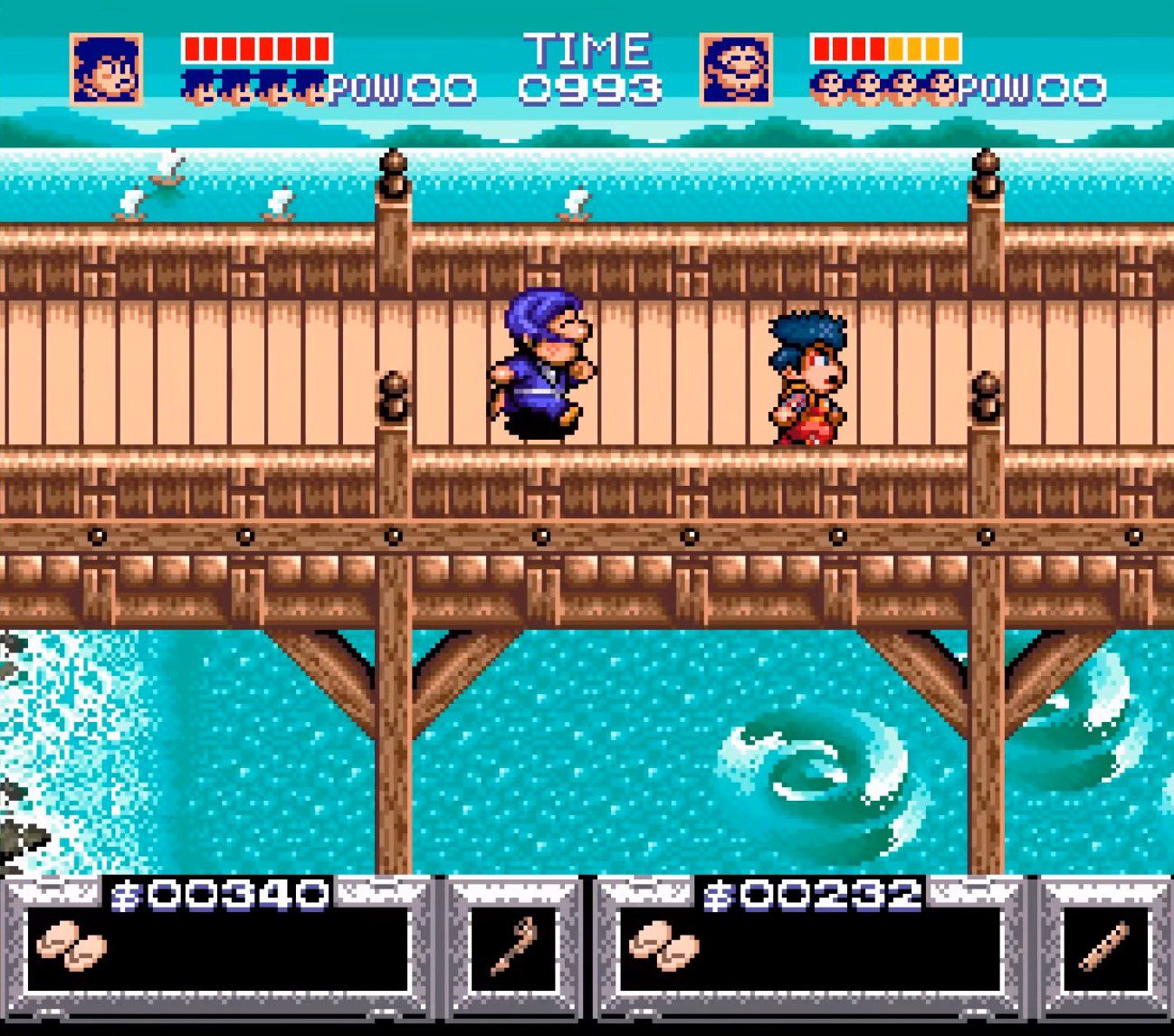 Really, no Ganbare Goemon game was ever perfect. Each was quite different than the one that preceded it, and each makes its own sacrifices and has its own strengths. Largely, Legend of the Mystical Ninja is my favorite. There’s just the right mix of weirdness and fun here. It gives a tangible sense of travel and a great mix of variety in the gameplay.

It would be the only game in the series we’d receive in the West on SNES. Ganbare Goemon would return on the N64 and Game Boy, but there were three (technically four) titles that were skipped over. The sequel was more of a traditional platformer, the third game was a top-down adventure, and the fourth was just bonkers (but also a platformer). We got screwed.

But at least we have Legend of the Mystical Ninja. The series sadly fizzled out around 2005 after trying to reinvent itself. With Konami handing its licenses out to smaller studios for games like the upcoming GestuFumaDen, I hold some small hope that Ganbare Goemon could come back someday. Maybe they’ll even lend it out to Good-Feel, a developer run by Ebisumaru himself! Or a translated compilation. I’d take that. Come on Konami, throw us a bone.