Every time we flash the Die Fledermaus signal, he unplugs his phone and leaves town for a week

Tim Burton’s Batman Returns is the best Christmas movie for people who don’t want to commit to the whole cheer thing. A lot of people say Die Hard, and I love Die Hard, but it doesn’t have Batman in it. It also doesn’t have Danny DeVito eating fish, so I think I rest my case. Superhero beat-’em-ups were a dime a dozen on the SNES and Genesis. Take a spin on the wheel, you’re either going to get a passible one or a title that’s just plain awful. They’re going to sell based on who’s on the cover, so why put any effort into them.

Some were decent, though. Batman Returns on the SNES comes to us from Konami while they were still in their prime. To give you an idea of the talent on hand, Etsunobu Ebisu — Ebisumaru himself — is credited for planning and programming. It’s interesting to see such names on a licensed game based on an American movie.

It’s also nice to see the score is based on Danny Elfman’s themes. While 1990’s Batman on the NES was pretty convincing in telling us they weren’t needed, I’m steadfast in my belief that Batman’s real theme is the one that Danny Elfman composed. Probably because I grew up with the Animated Series, but I’m too old to change my opinion. 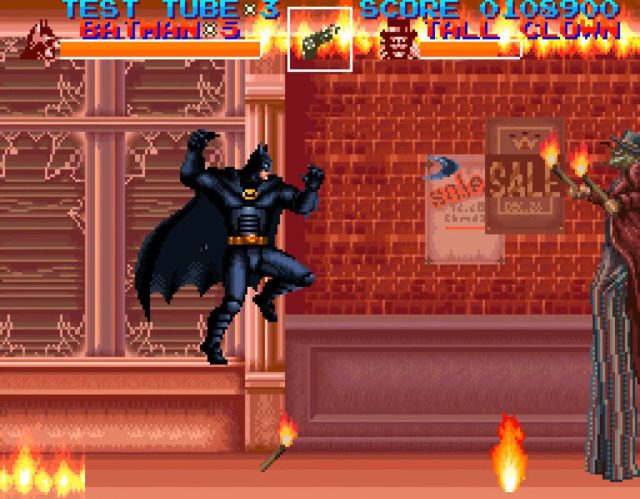 Batman Returns is pretty standard for conveyer belt beat-’em-ups. The controls are rather close to Streets of Rage. You technically have one attack button but can pair it with jumps and grabs. The great thing about the grabs is that they’re absolutely brutal. By default, Batman just slams the enemy into the ground, but if you move towards pieces of the set, you can bash them against windows and railings. You can also grab two enemies and slam them into each other, which is pretty ambitious for an SNES game.

It certainly doesn’t reinvent the wheel. The only wrinkle it really puts in the tapestry is some side-scrolling levels and a driving stage. There’s even a special move that attacks in all directions but damages your health, and screen-clearing bombs. It’s more or less just following the recipe.

The combat is just so powerful and impactful. It reminds me slightly of The Death and Return of Superman, but a little tighter and more reliable. You’re just bashing dudes. Streets of Rage but with Batman is a pretty easy sell for me, but Batman Returns does have its deficiencies, many of which it shares with its contemporaries. Your opponents, for example, are lacking in variety. They’re all clowns. All of them. Different types of clowns, sure, but clowns. That’s pretty true to the movie, but I feel like a street tough or two could be thrown in. Of course, then I remember that my beloved Streets of Rage has you fight palette swaps of thugs for the entirety of the game, and things begin to make more sense.

There’s also no co-op, which is also true to the movie because this is before things were ruined by Robin. Still, I feel co-op is an important feature when it comes to trashing clowns. Maybe Catwoman could have stood in? She was sort of grey. Or better yet, just throw in Alfred. It would be amazing.

The bosses are also cheap, which is true to the ‘90s beat-’em-up. You’ll probably drop the most lives on them, rather than all the children’s entertainers you’re savaging on the street. The game’s also rather brief — again, typical of the genre at the time — however, Konami’s love of limited continues gets in the way. It may take a few attempts before you reach the end, but it’s at least doable, unlike the port of Final Fight on the SNES.

That means it doesn’t overstay its welcome, which was a problem encountered by a certain other superhero game of its genre. And really, if they were just planning on showing off the same dingy streets and the same make-up wearing freaks for the entire runtime, best wrap it up early.

Yet, what’s there is incredibly solid. The combat has a good sense of physicality, the aesthetic is true to the movie, and it’s the chance to experience what it’s like to be Michael Keaton. I may be a bit biased because I absolutely love Batman Returns for SNES and Konami’s early work, but… that’s it. That’s my whole point. I might be a bit biased. Do with that what you will.