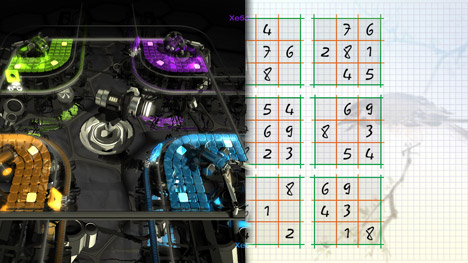 The first (and certainly not the last) Xbox LIVE Arcade Sudoku game, Buku Sudoku (800 Microsoft Points), arrives this week in addition to a remake of an arcade classic from the days when Atari ruled supreme, Warlords (400 Microsoft Points).

Buku Sudoku is exactly what you’d expect it to be: Sudoku on your television, possibly even in high-definition. With 1,200 puzzles and multiplayer for up to four players (co-op and competitive modes), Buku Sudoku might actually be worth looking into if you consider yourself a Sudoku aficionado.

While there’s simply no beating the Warlords cocktail cabinet, this Xbox LIVE Arcade port will try to garner that same experience through its support of the XBL Vision Camera. As we’d come to expect from previous Atari remakes, Warlords will include a new, prettier version of the breakout-esque game.