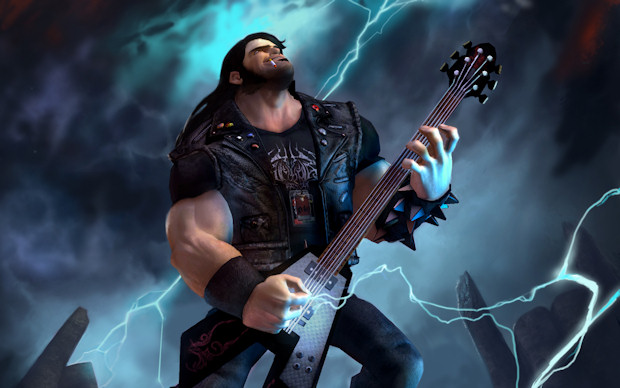 Filters have been around in videogames ever since you could toggle the blood in old fighting games. It’s amazing, then, that it’s taken this long for a videogame to make a filter that’s actually part of the game and quite amusing. Brütal Legend takes a novel approach to censorship, with a rather novel way of letting you decide whether or not you want swearing in your game.

The swear filter comes by way of a cinematic that Double Fine showed off at PAX, with Eddie Riggs talking to a member of his wannabe metal band, Kabbage Boy. The bandmate is crawling around on top of Riggs’ opulent stonehenge setpiece, as he shouts, “I don’t know how many times I’ve told you not to crawl around up there! I don’t know what the F …”

Before Eddie can finish the “F” word, the game freezes and a menu pops up asking you to choose whether or not you want swearing. Voila! Dynamic cursing, courtesy of Double Fine. Apparently this is one of two such filtering options in the game, although the second is yet to be revealed and may possibly have to do with the violence.

Those wacky chaps at Double Fine just don’t play by the book, do they?