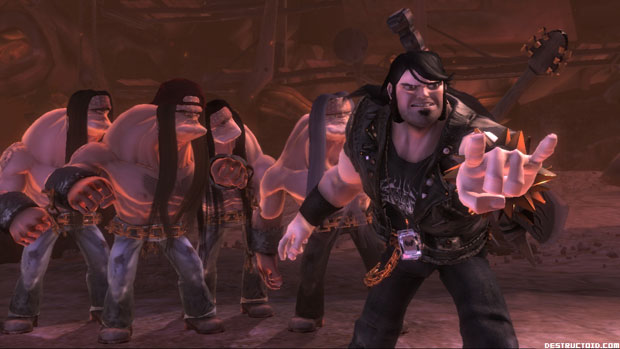 There was little doubt that Double Fine’s Brutal Legend was going to get slapped with an “M” rating by the ESRB. This is a game based off of heavy metal culture — sex, drugs, rock n’ roll… an Iron Maiden album cover brought to life.

So when the ESRB got their glimpse of the game’s juciest bits, they walked away with a lot to say. In fact, the description found on the ESRB Web site is without a doubt the longest we’ve ever read. It talks of “‘face-melting solos’ (literally melting enemies’ faces),” and “dominatrixes.” It mentions main character Eddie Rigg’s hot rod that bowls over enemies, “resulting in blood effects and more heads and limbs getting chopped off.” There’s an enemy whose tight, bondage gear outfit reveal buttocks and breasts. The words “f*ck,” “sh*t,” and “d*ck” are tossed around liberally.

In other words, this may very well be the best greatest videogame ever made.  Hit the jump to read the full ESRB description.

This is an action adventure/role-playing game that tells the story of Eddie Riggs, a roadie who is transported to a mythical world of heavy metal rock. Eddie is armed with a guitar and a double-headed axe, which players can use to slash and dismember enemies. Players can also perform “face-melting solos” (literally melting enemies’ faces), meet humanoid creatures dressed like dominatrixes and brandishing whips, and liberate an army of rockers from a life of oppression. Although the storyline is often irreverent and whimsical, the depictions of violence are somewhat intense: Undead humanoids are dismembered with an axe (sometimes in slow-motion); a “Steel-Quilled Blade” causes human enemies to explode into gibs that rain down; machine guns, missile launchers, and sub woofers can be used to kill druids and other fantastical creatures. Eddie can also run over dozens of enemies with his hot rod, resulting in blood effects and more heads and limbs getting chopped off. During the course of the game, characters sometimes engage in suggestive dialogue intended for comedic effect (e.g., “Maybe with all your feedback, you guys could just blow me over the gorge” and “Playtime’s over. Now let’s get back to the orgy”). Players will also encounter “Skull Rakers” clad in bondage gear and amazon-like warriors dressed in leather outfits that partially reveal buttocks and breasts. Strong profanity (e.g., “f*ck,” “sh*t,” and “d*ck”) can be heard in the dialogue