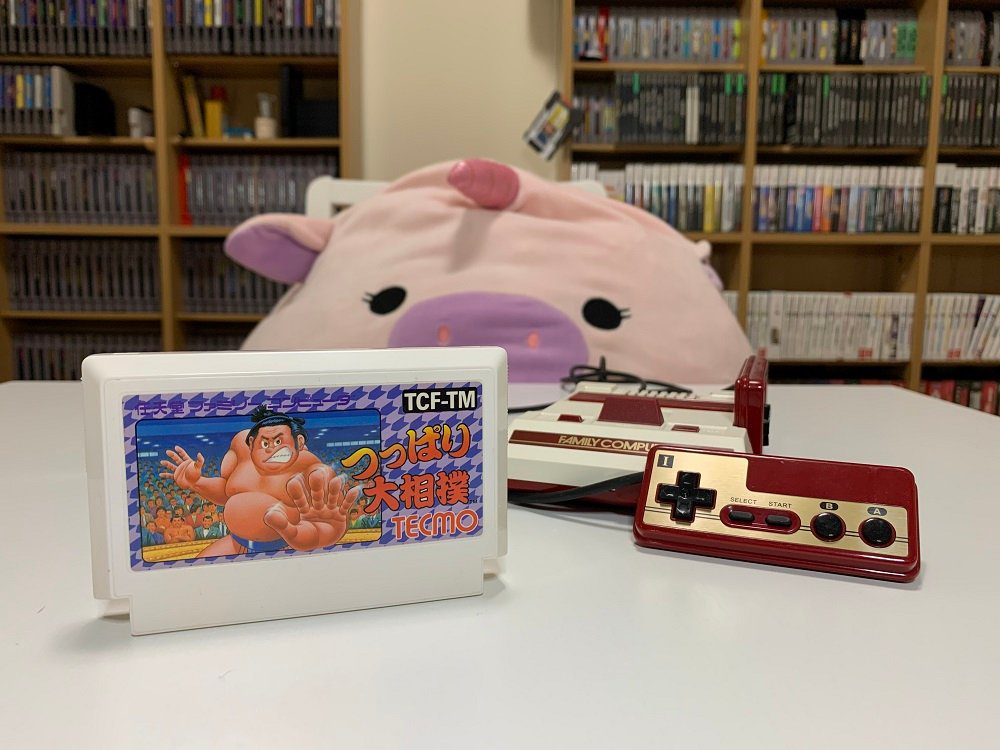 Aim for the title of Yokozuna this Famicom Friday

I don’t have much to say about the sport of sumo. It’s really old and has held onto many of its traditions. It’s also not difficult to get the gist of. Push the other rikishi out of the ring or knock them off their feet. Because of this, size is a major advantage and that gives us the typical image of a sumo wrestler: a rotund mass of human. Immovable objects that walk like men.

It’s interesting to me, but not enough that I’ve gone to the effort of actually seeking it out. If I want a dose of Japanese culture, I typically turn to dating simulators and my Famicom. What luck! Crossover! Way back in 1987, Tecmo released Tsuppari Oozumou, a simulation of the sport. Sort of.

Tsuppari Oozumou may be the first Famicom sumo game, but it is neither the first sumo game nor the only one to be released on the system. It also doesn’t seem to be all that interested in presenting a simple simulation, but rather a fun in-between. Your goal is to progress through a series of tournaments, building up your rikishi until you achieve the rank of Yokozuna.

The foundation of the game is a pretty simple progression of matches without much variance. Different rikishi employ different strategies, which is kind of cool for a 1987 release, but it’s always the same thing; same ring, same goal, same parameters. It may seem like something that would get old fast, but certain facets give it a one-more-tournament kind of value.

For starters, your rikishi levels up as you win fights, so you’re constantly getting stronger. Also, while the game is rather simple, through playing it, you’ll start to pick up new techniques that allow you to better dominate your opponent. This includes lifting them up by the thong and carrying them forward or countering them as they charge at you. I might be overselling the depth, but the point is that there is just enough that it reaches an almost addicting quality.

It helps that the graphics are adorable. It looks great for a 1987 title, featuring well animated and expressive wrestlers. The more cartoonish approach to the sport works for it through small details. Pause the game before a match starts and a dude will sweep the ring, get a really good throw on an opponent and they might crack the ground, and the look on the face of a victorious rikishi is just so endearing. Even though you’re staring at the same arena the whole time, it’s still pretty visually stimulating.

Just be careful; the secret to winning is not mashing buttons as hard as you can. It can be really tempting to try and overpower your opponent by slapping the A button until they fall out of the ring, but you’re just going to wear out your thumb. Like actual sumo wrestling, it’s more about figuring how to wear down your opponent and use their momentum against them. Are you getting too close to the edge? Spin them around to turn the tables. Are they a little too aggressive? Give them a few face slaps to settle them down. Don’t just go on hugging and think that you can move them out of the ring, there is definitely some strategy involved.

There are some advanced techniques that involve pulling off certain moves while your stamina bar is flashing. It’s a little difficult to figure out at first, but as I reached the end of the game, I was starting to pull off suplexes with some regularity.

It may have taken me most of my night, but I was able to reach the rank of Yokozuna without tremendous difficulty. There’s a password system that lets you continue from any point in the game, so you can put it down whenever your thumb tires out.

Tsuppari Oozumou is a pretty simple game, so I don’t want to oversell it, but I enjoyed it quite a bit. It’s a sunny, light-hearted look at the sport, and it remains fun for its rather short runtime. If you have another player to compete with, it’s some nice, light entertainment. Just remember, in the heat of the moment, don’t mash on the A button.

It’s no mystery why Tsuppari Oozumou never reached Western shores. While I think there was room for a sumo game in the NES library, it would have been a big risk for whatever publisher attempted it. As well as its Famicom release, it hit the Wii, Wii U, and 3DS Virtual Console. Additionally, It was included as one of the 30 games on the Famicom Classic Mini. These days, it can be found on Japan’s Nintendo Switch Online service, so if you feel like region hopping, you can try it out.

As for a translation, that’s a bit more difficult. There’s one that demystifies the menu options, but most of the game’s text is written in classic top-to-bottom reading style, and it makes heavy use of kanji. You can certainly play it without knowing the language, but you might have trouble tracking your progress. Maybe if you just want to play the two-player mode. In which case, it’s the bottom option on the main menu.