Anyway, I stumbled upon this list of videogames that break the fourth wall. The Wiki Gods have deemed it needs a complete rewrite — gasp! Ha ha, if you wrote that, you FAILED. But anyway, it lists a whole bunch of games that suspend the pretense of fantasy temporarily in order to engage with the player, or to otherwise indicate that (lest you forget) you are, in fact, playing a videogame. This can be anything from a vanity blip by the game development team — say, sneaking into a crack in the map in Duke Nukem, only to be told by Levellord that “you’re not supposed to be here,” — to more elaborate stuff, like the freak-tastic devices surrounding Psycho Mantis in Metal Gear. I mean, METAL GEAR … !

Let’s talk; let’s chat. I’m casual, approachable and mainstream that way. I’m on the Internet! That must mean I’m cool, right? So hit the jump for more confab!

I promise it’s not a love-fantasy treatise about Big Boss … this time.

Technically, the Wikipedia list could be a lot longer — how many times have you been saving the world, only to encounter a character who instructs you to “press square to…”? That sort of thing is probably unavoidable, though; the most effective way to learn to play a game is through tutorials, and the most unobtrusive way to present a tutorial is to try and embed it in the game — like a battle arena that teaches the combat system, or a wise sage-type NPC who spouts instruction on what to press to interact in the environment.

Even when you’re accustomed to and expecting that element to crop up, at least early in gameplay, it can sometimes be if not jarring, just slightly disappointing — an interruption of a willful immersion in an interactive unreality, depending, of course, on the game. I have this fantasy of an entire gaming package, where the game itself comes with a fab story book, or little artifacts or cards or something that, through indirect analogy, provides enough clues to the players that they can essentially explore, themselves, how to play. Seems to me they used to do this, to some extent, but I’d really like to see it done all-out in the modern day, making using the game as much an adventure as playing it.

One of the things I liked best “Back in the Day” was that many of the games I played on my Apple IIe were fairly clapboard affairs; the accompanying literature was often word salad, or so it seemed to my unsophisticated little baby mind. I was also spoon-raised on Mac freeware, point-and-click adventures that were largely buggy or entirely incomplete, entries in competitions, perhaps, that their designers never expected anyone to play with extensively. Nowadays, I wouldn’t tolerate such a thing for a minute, let alone for years, and neither would anyone else in the audience. But back then, it was an adventure — figuring out HOW to play, how to play around the bugs, and whether you could think of something that the game hadn’t, was probably more than half of the fun. Every new game was a blank slate, and I had a vested interest in teaching myself its ins and outs so that I could make good use of the experience. To this day, I’m not habituated to reading manuals, and prefer to stubbornly fumble my way through the beginning stages of a new game. It bewilders anyone who plays with me — but hey, the game’s gonna tell me how to play in a little while, aren’t they?

When Hotel Dusk: Room 215 came out, I reviewed it for Paste. I was kinda divided about it; it was too easy, too linear, and too slow. But it was also fantastically drawn, endearing and innovative. The best part was the use of the DS’s touch screen, microphone, and even its hinge. You’d be confronted with a screen of objects, and then have to figure out how to manipulate them to achieve the goal. Sometimes doing the obvious — tapping away with the stylus — was utterly useless; you might have to use intuitive logic and blow into the microphone, or actually close the DS to flip over a jigsaw puzzle from one screen to the other. That the latter info is actually a spoiler, though, is an example of why I wish this game was as strong as it could have been. But the fact that, without explanation, I was confronted with how to best handle a situation through trial and error was one of the things I liked best. 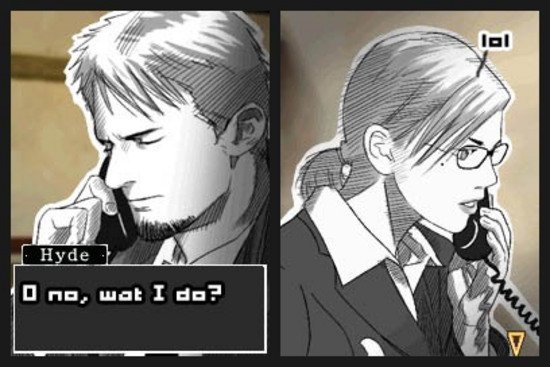 I think that there’s a time and place where it’s useful to break the fourth wall to create gameplay (not just to train the player). This article in the Escapist by Wired‘s Susan Arendt discusses Evidence: The Last Ritual, where players tracking a serial killer actually get helpful (or haunting) emails from story characters, as well as other similar games that, for example, have you use the Internet to search for clues to the next stage. I’m sure I tried things like this a few years back; without remembering many specifics, I seem to recall they didn’t work very well — elements that were supposed to be intuitive felt manufactured and heavy-handed. But I’d definitely like to see games continue to explore how to best use the barrier between player and game, whether that means building a seamless iron curtain, or an effective transparency.

So what about you? Got an experience of broken-fourth-wall that made you go, “Whoa?” Think it should be pursued, or avoided? What are your ideas for connecting the player with the game?