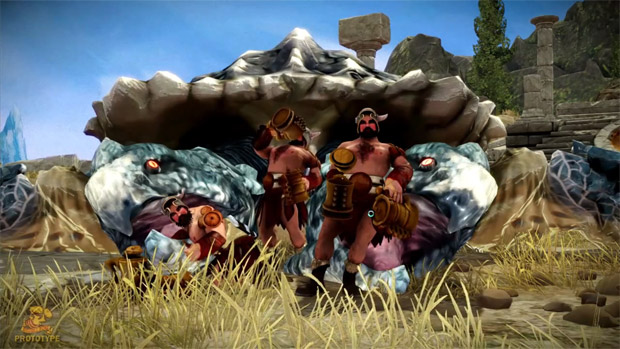 Some of you were very enthusiastic about Double Fine’s Amnesia Fortnight bundle, which is essentially the studio’s way of giving people the opportunity to check out playable builds of prototypes and also vote on potential projects they’d like to see move forward. The bundle itself has been sweetened with the inclusion of a new prototype, Brazen, for those who beat the average contribution amount. Now I’m feeling giddy!

This is a four-person cooperative online action game led by Double Fine’s Brad Muir, who previously served as project lead on Iron Brigade. By watching the video, you’ll surely see some similarities between the two titles, but this one takes things in a different direction.

According to Muir, Brazen is inspired by the stop-motion animation of Ray Harryhausen (Jason and the Argonauts, Clash of the Titans). That’s all I needed to hear, personally. I’m super into the game on a conceptual level and hope it becomes a fully realized title able to capture the essence of those wonderful films while still being fun to play.