For a long time, American comic books consistently butchered the works of Japanese game developers with hackneyed, half-hearted game-to-comic adaptations. I still remember the pain I felt after buying Malibu’s Street Fighter comic all those years ago. I think I actually said “YOU MANIACS! YOU BLEW IT UP!” to myself as I read through it. Everything that I loved about Street Fighter was either badly mangled or removed completely, all in favor of a story and an art style that seemed to spit in the face of everything that made Street Fighter so special.

Years later, a group of comics professionals got together who actually appreciated the art of Street Fighter and other Capcom games, and by “appreciated,” I mean “worshipped.” While they’ve been tapped to work on projects related to the Metroid Prime series, the film Inception, and the upcoming Godzilla reboot, the team at Udon inevitably comes back to the series that inspired it all: Street Fighter. Even during the years when it looked like we’d never see another Street Fighter game, Udon was still producing new Street Fighter comics.

Their hard work and dedication has been rewarded. Capcom has actually commissioned Udon to work on a few of their games, including Tatsunoko Vs. Capcom, and Super Street Fighter II Turbo HD Remix. In this book you’ll see artwork from those games, as well as from Udon’s comics, and other original Capcom-related works. It’s basically a “best of Udon” of the past four years. Read on for details. 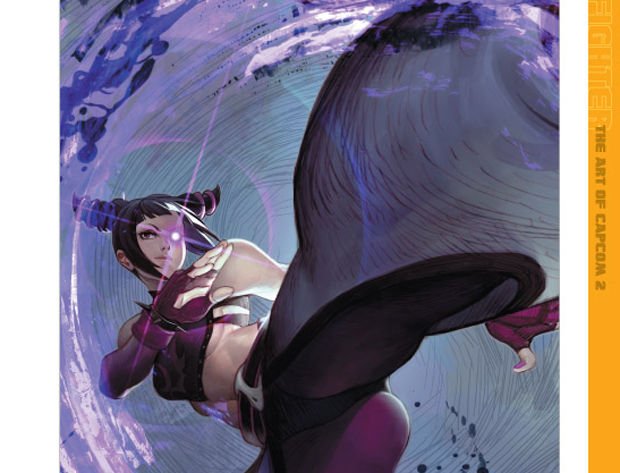 This book opens up with some amazing stuff. It may actually be too amazing for the book’s own good. The cover and the first section’s illustrations feature some of the best stuff in Udon history, and that’s coming from someone who has bought every Udon comic since the company’s start in 2000. Things start off with a Viewtiful Joe/Mega Man + Sagat/Sakura/Dan piece that had me grinning from ear to ear. From there, we get a two-page spread entitled “Capcom Olympics” that features every playable character from Street Fighter, Darkstalkers, Rival Schools, and Final Fight ever. I tried to count them all, but I lost count at 95. Things top off with another two-page spread entitled “Evil Everyone”: evil Birdie, evil Ibuki, evil Dhalsim, evil Chun-Li, and a super-evil Akuma (complete with smiling fang-face), among others, all make an appearance. It’s classic stuff, definitely poster-worthy. 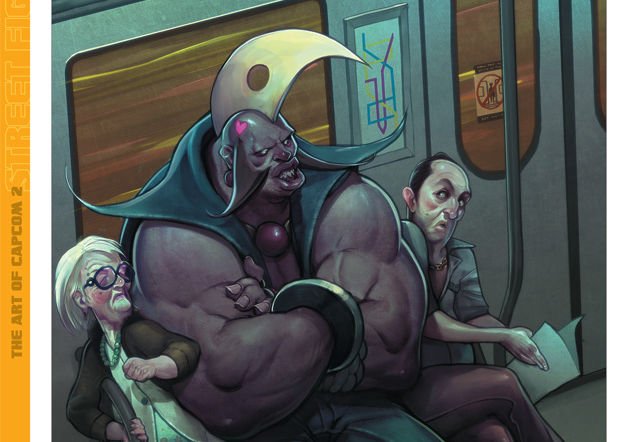 After that, things take a dip. Though the quality remains high, the originality doesn’t. Although I knew from the start that this book is more of a compilation of Udon’s best work from the past four years, I couldn’t help but be let down when I hit the cover gallery. If I didn’t religiously buy every comic that Udon releases, I probably wouldn’t have noticed, but I’d have to imagine that the target audience might relate with me on this. The fantastic opening pages of the book spoiled me, which caused a marked decrease in enjoyment once the stuff I’d already seen started pouring in.

Fifty or so pages of awesome, previously purchased comic covers later, and I’d see something new every two pages or so. Some was familiar to me, like art from the Magic Sword/Final Fight mash-up that was released on XBLA/PSN earlier this year, or trading card art, or art from the Street Fighter Encyclopedia that was just released. Still, seeing these illustrations reprinted here in a larger format revealed details that I didn’t see before, and made them feel like new. 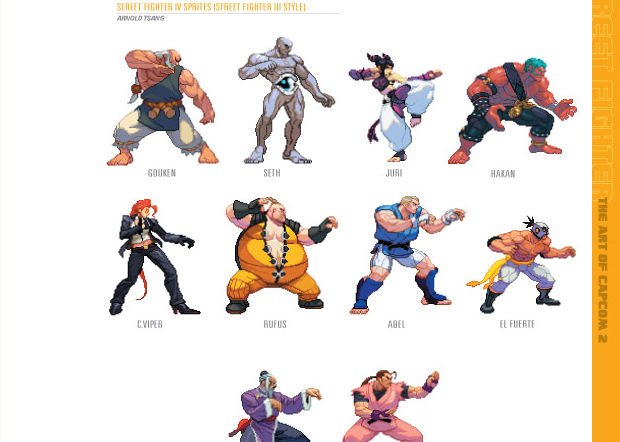 Peppered amongst these enhanced reprints, I found amazing art that was totally new to me. There’s a piece featuring Violent Ken (from SNK Vs. Capcom Chaos) vs. Evil Ryu (from Street Fighter Alpha 2) that’s basically a Street Fighter nerd’s dream come true. After that, the nerd dreams just keep coming. As much as I appreciate Street Fighter IV, I can’t help but wish that the series had remained sprite-based. It appears that Udon mainstay Arnold Tsang read my mind, as he’s translated all of the new characters from the Street Fighter IV games into beautifully rendered, Street Fighter III-style sprites (as seen above).

The more showy pieces are nicely contrasted by more humble, unassuming work. A loose, sketchy marker drawing of Juri, a Street Fighter IV-style illustration of Dan’s oft-forgotten father Go Hibiki, a look at Ken balancing on a beach ball juggling miniature versions of Ryu, Zangief, and Chun Li’s heads; it’s these little extras that show the true breadth of Udon’s imagination. It’s nice to see artists that I’ve grown so familiar with try some new things. Omar Dogan, another Udon regular, tried an alternate coloring style on the Ibuki illustration seen below and the results speak for themselves. I think it’s the most welcoming, expressive piece of art he’s done yet (see below). 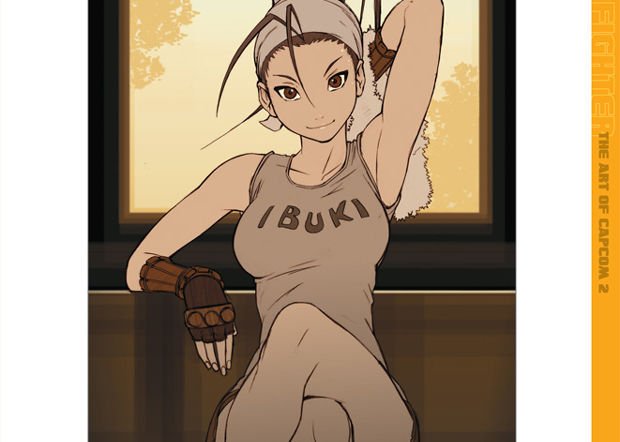 The book caps off with loads of stuff from games that Udon has worked on: Tatsunoko Vs. Capcom, the XBLA/PSN re-release of Marvel Vs. Capcom 2, and SSF2THDR. If you own all of those games, then this artwork will all feel familiar, but still fresh. You get key frames from all the character animations in SSF2THDR and a closer look at all the game’s backgrounds and endings. With Tatsunoko Vs. Capcom, it’s just endings, plus a few promotional pieces. The Marvel Vs. Capcom 2 stuff is strictly promotional work, including some text-free comic pages featuring Iron Man duking it out with Mega Man, and Strider cutting up Wolverine. All this stuff looked nice on my computer monitor and/or TV screen the first time around, but it looks even better on real-life glossy paper.

All sounds pretty good, right? It is, though I was a bit bummed by the way the book ends. Udon’s Art of Capcom 1 featured a nice “how-to” section at the end that worked as the perfect conclusion. After marveling at the work of Udon’s finest, it was downright inspiring to see firsthand how they work. Not only did it make me appreciate how hard it is to create professional-quality artwork, but it also made me feel like I, too, could make something that great someday. Udon’s Art of Capcom 2 has no such “how-to” section. Not that big of a deal, but still a tiny bummer. 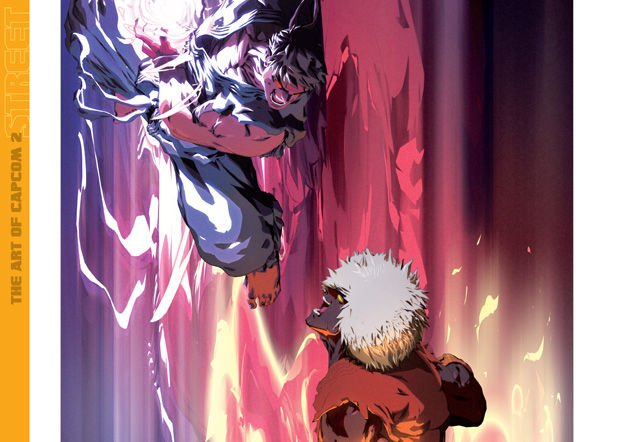 Don’t be like me. Don’t get spoiled by all the original work in this book. Know that if you’ve bought every Udon comic, trading card, and game over the past four years, you’re going to have seen a lot of this stuff before. That also means that you’re probably pretty rich, which means you can afford to pick up this book for the new material it contains. The new stuff here is amazing, some of my favorite Udon work to date. New fans and old fans of Udon alike would do well to pick it up. And don’t go looking for scans from this book on the internet. You won’t find them easily, and if you do, you’ll get a virus that makes your computer piss blood and then die.