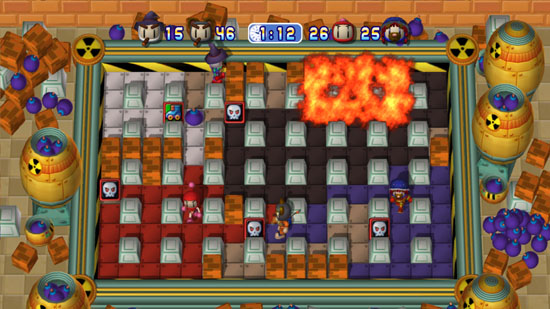 Hudson had a whole corral of journalists out for their big Bomberman Live debut in San Francisco on Thursday, and Destructoid was there to represent the interests of robot-headed gamers ’round the world. We were settled down in front of three TVs, given twelve controllers and lots of beer, and set loose upon one another in a flurry of angry bombing mayhem that can only be described as explosive. Yes, yes — I went there.

You’ve seen the screens, read the features, but does the game stack up to previous series high-points like Saturn Bomberman and Super Bomberman 2? Does it provide the same frantic gameplay experience we’ve come to expect from the series? And can it wash out the slightly sour taste left in gamers’ mouths after the ill-fated Act Zero? Yep, it sure can.

Hit the jump for my impressions in glorious long-winded and non-bulleted form.

Right, so, let’s get this out of the way: it’s no secret that Act Zero didn’t fare well with the public or the press. Hudson’s cool with that, going so far as to make a few cracks at their own expense in their pre-shindig development diary video — hopefully that’ll make its way to the web sometime soon — and it looks as though this iteration of Bomberman is moving in the direction we hoped it would. This is Bomberman as we remember it, kids, make no mistake about it.

XBLA serves a really weird role in the DLC world nowadays — it’s at once the home for fantastic updates, incredible original IPs and extraordinarily lackluster ports. My biggest question for the developers going in was which particular title offered them the most foundational elements upon which to build this new game — the answer is, well, almost all of ’em. Hudson and Backbone Entertainment have cherry-picked some of the best elements from the series and combined them into the last version of Bomberman you’ll need for a long, long time — and it’s not a port! Huzzah!

The game is right at home on Live, serving up to four players in local multiplayer and up to eight online. Our play was local, so most of our matches were limited to four players, with the exception of a handful of rounds where we filled in the gaps with computer AI — rest assured that eight players on a single grid map is just about the most insane and terrifying experience of my life. The room was alive with whoops, hollars and vulgarity of all kinds throughout the day while we blew eachother to smithereens — while this game will most certainly make for great online multiplayer, nothing can quite compare to ripping your buddies apart on the same couch.

Bomberman single-handedly ushered in an era of console gaming in which multiplayer was indispensable; this couch dynamic played a huge part in that. The developers have taken steps to assist in the emulation of this experience, incorporating in-game voice chat (natch) and, for Xbox Live Vision gamers, victory shots after each round — you know, so you can see the middle fingers, the shoes flying towards the television, and an assortment of human anatomy displayed in righteous victory over other players online. It’s expected that a game like this would lose a little bit of its magic in the transition to online play, but there’s enough here to tide you over until your next opportunity to amass three friends and a case or two of beer.

Oh, and before I forget — when you play this game, learn to fear the phrase “dangerous bomb”, uttered when the power-up is picked up. Introduced in Bomberman DS, the Dangerous Bomb explodes in a radius throughout the grid instead of the standard and simple X and Y lines, and is bound to be the most notorious threat in the new title. I can’t be certain which killed me more: dangerous bombs dropped by other players or by, y’know, me. That shit is raw. One of the most intriguing elements of Bomberman Live is the sheer amount of customization possible in round creation. The game features eight maps, four main game modes and offers players the option of tweaking almost every little detail about gameplay that you might imagine, allowing for an experience tailored to your preferences. Each of the eight maps includes a unique set of traps and gimmicks to further infuriate your friends as you hurl fiery shrapnel into their unsuspecting foreheads, all of which can be turned off at your discretion. My personal favorite of the maps was “Plunder Isle”, a simple map with no traps or gimmicks — just a mass of power-ups inside a ring of destructible blocks. All four players start on the outside, which makes your only hope for victory a quick route inside, rapid collection of power-ups and the swift dispatch of your less-than-speedy foes. Absolutely insane map.

While we’re on the customization bit, it doesn’t stop with the maps and game modes — there’s plenty to do with your wee Bombermen, as well. By collecting “costume balls” — pretty little crystals scattered around the maps in offline play — you can unlock various complete costumes that can be mixed and matched to create the most gender-confused Bombermen you can imagine. I’ll paint the picture for you: once introduced to character customization, almost every one of us opted for the manliest head (punk rocker and cowboy were top choices) and the most effeminate body and legs (opera singer, ballerina) — proof positive that gaming journalists have a lot of really curious issues that we can only work out through the games we play. Hudson’s good at math, so they assure me that over 10,000 combinations are possible. Numbers? The hell are those?

Even if the current climate of gaming and all its ports, revamps, and remakes has you a little jaded, if you’re a fan of the series, you’ll find something to love in Bomberman Live. Just hope that more developers follow Hudson’s good example and start putting some real work into their downloadable incarnations of classic series — we’ll all be better off for it.

And hey, stay tuned for an interview with Hudson Entertainment CEO John Greiner and a full account of my day at Hudson, including a recounting of the most epic Bomberman tournament ever.