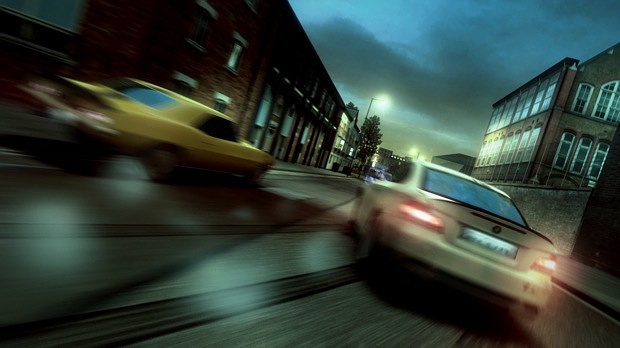 In a lean thirty-five seconds, we learned Blur was not Project Gotham Racing. The debut teaser footage in May followed the journey of a shiny red car — every vehicle in a racing game has to be shiny — down an empty strip of interstate. After twenty-two seconds, the car is blasted into the air by lightning. Then, a horde of cars zoom past the destruction one of them presumably caused.

No — Blur is not Project Gotham Racing. It’s Mario Kart on steroids.

“The PR people don’t really let me say this but Blur is like an adult Mario Kart,” Blur executive producer Ben Ward told Develop. “It’s what you want from the next-generation of karting games.”

In the first part of the lengthy interview, Ward elaborated on the Mario Kart inspiration. He added that the game would only take the best from Nintendo’s classic kart racer and leave out the bogus stuff: the unrealistic handling, poorly designed power-ups, and dinosaurs.

(Just to be clear, Ward didn’t specifically mention the removal of dinosaurs. But it’s common knowledge that dinosaurs can only open doors and kill hunters with funny accents. Don’t count on seeing one driving a hotrod in Bizarre Creations’ Blur.)

If the director of the teaser footage snuck in a banana peel or a humanoid mushroom somewhere, we would have certainly nailed the parallel. Oh well.