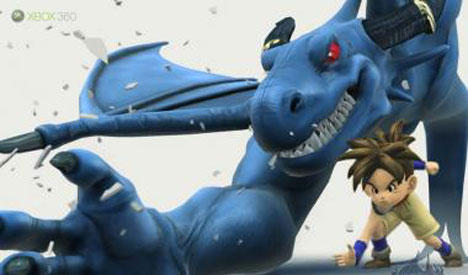 Something about Mistwalker’s Blue Dragon has piqued my interest since I first laid my eyes on it; but I was never sure if my short, American attention span (due to years of MTV and episodes of Baywatch, no doubt) would be able to handle it. It looks like I’ll have my chance to find out before the game hits shelves this August.

In a recent interview with GameSpot, designer Hironobu Sakaguchi has confirmed plans for an English-language Blue Dragon demo, set to hit the Xbox Live Marketplace sometime in June or July. The localization of Blue Dragon is also discussed  in the interview — only two of the in-game songs are receiving the translation treatment and more notably, an adjusted difficultly (that was included as downloadable content in Japan) is being included in the North American game.

There’s also talk of downloadable content for Western shores, including a new dungeon and an “impossible” difficulty level.

When asked about a demo for Mistwalker’s other Xbox 360 RPG, the Unreal 3 powered Lost Oddessy, [Microsoft’s global project manager] Hees Kyung is all like, “Step off. It ain’t happening, sucka. How about some video content, dog?” Except, you know, he was much more professional about it.