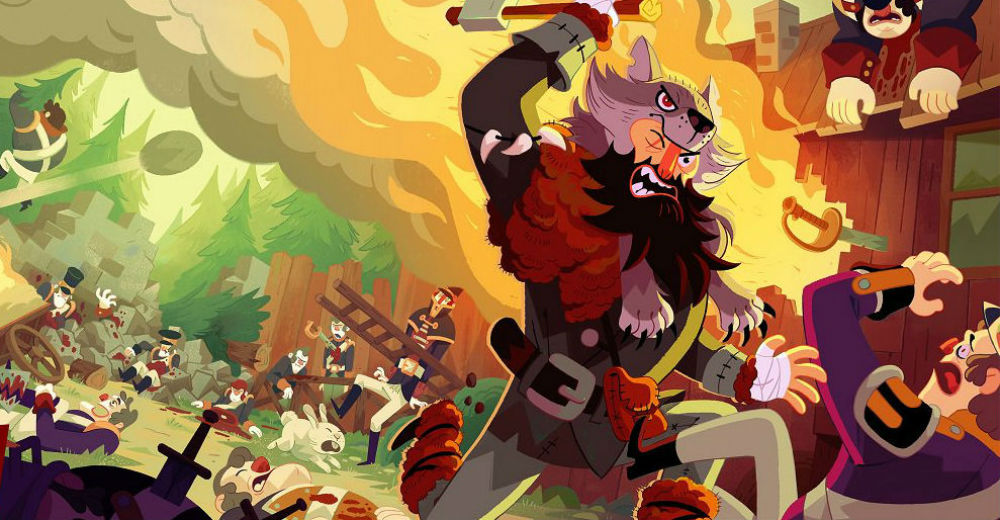 PAX’s Indie Megabooth is always worth checking out, and it’s frequently one of the most crowded sections of the show floor. You never know exactly what to expect when you visit, but there’s almost always something exciting and eye-catching around every corner. One of the highlights for me this year was getting to try out Bloodroots, a heavily stylized action beat-em-up that combines some of the gameplay ideas of Hotline Miami with the visuals of Samurai Jack.

Bloodroots begins with your character Mr. Wolf gazing silently into a fire while another character sidles up behind him with an edged weapon in hand and murder in his eye. Mr. Wolf snaps out of his reverie just before the killing stroke, and we find that he must have fallen asleep by the fire. Whether the dream was a memory or a premonition is unclear, but it gives Mr. Wolf the motivation to begin a killing spree of epic proportions.

Gameplay in Bloodroots is fast and fluid, and the only rule is to kill everyone on screen before they can return the favor. Almost everything on screen can be picked up and used as an improvised weapon, from ladders and wagon wheels to fence posts, fish, and root vegetables. Weapons break after use, but some have a little more durability than others. Many give you different mobility options, for example a sword will send you streaking across the screen in whatever direction you swing it. Just like Hotline Miami every successful attack results in a one-hit kill, and enemies are just as deadly to you as you are to them. 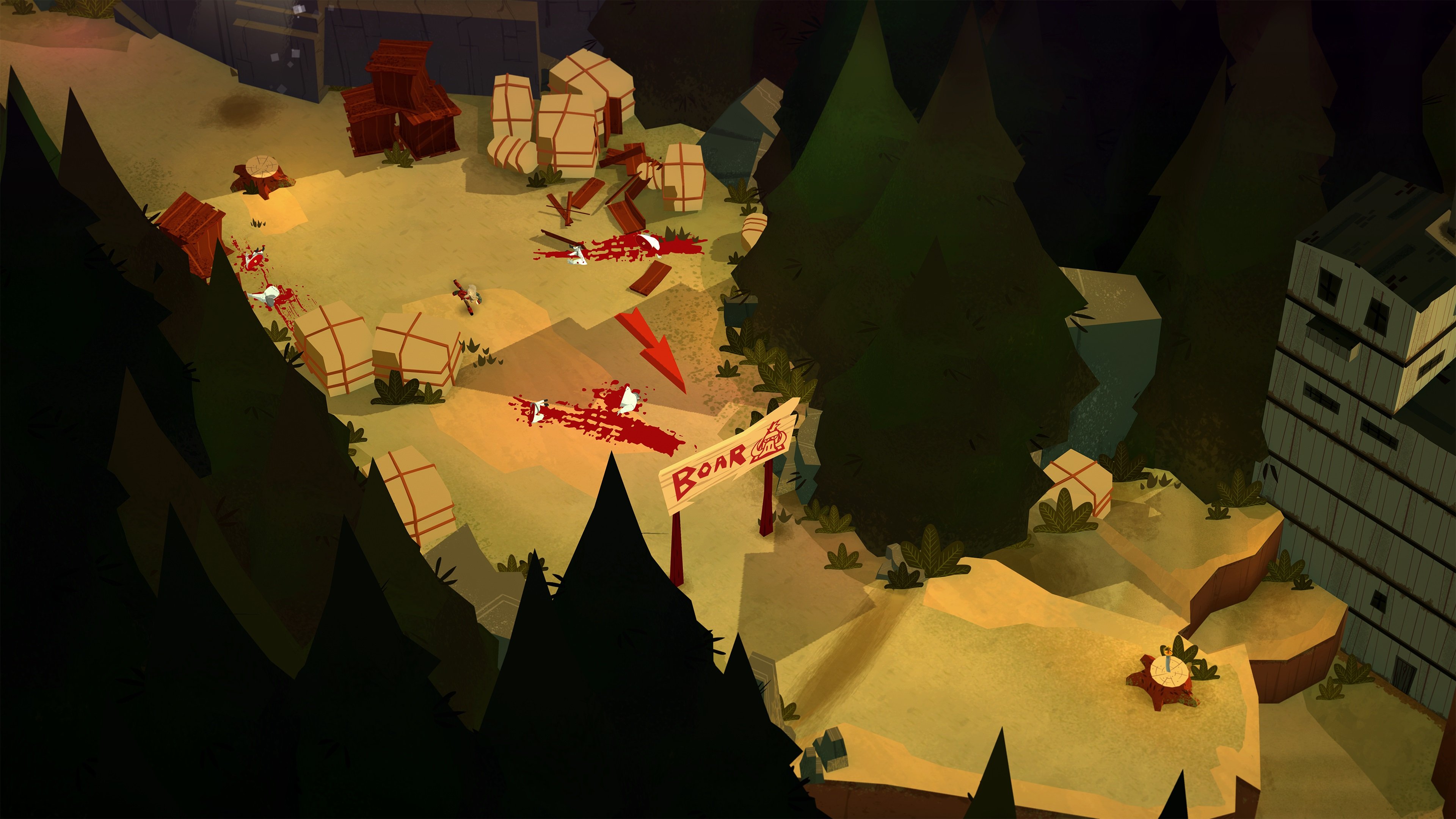 Most objects on screen can be used in a variety of ways, and some are less obvious than others. A ladder can be used to climb a hill, but can also be spun around your head like a helicopter and used to hover for a few seconds. You can jump on top of a barrel and crush foes like a steamroller, or roll it through a campfire to start setting enemies alight. it’s possible to get some environmental kills if you keep your eyes open, and I managed to crush some of my enemies by chopping down a tree which landed on them. There’s a combo system in play if you can keep moving from foe to foe before a timer runs out, and online leaderboards will keep track of vikings who put up especially good runs.

Screenshots don’t do the game justice, and it really needs to be seen in motion to be appreciated. The visuals on display are striking, bringing to mind the work of Genndy Tartakovsky and others who combine simple linework with cinematic ultraviolence. One of Bloodroots‘ developers used to direct music videos for a living, and it shows in the visual presentation. Killing the last foe in an area will reward you with a short cutscene that slows down and zooms in on the final attack, no matter what weapon you’re using. I found myself trying to use improbable weapons to get that last hit so I could watch Mr. Wolf impale an enemy with a carrot or something equally ridiculous. 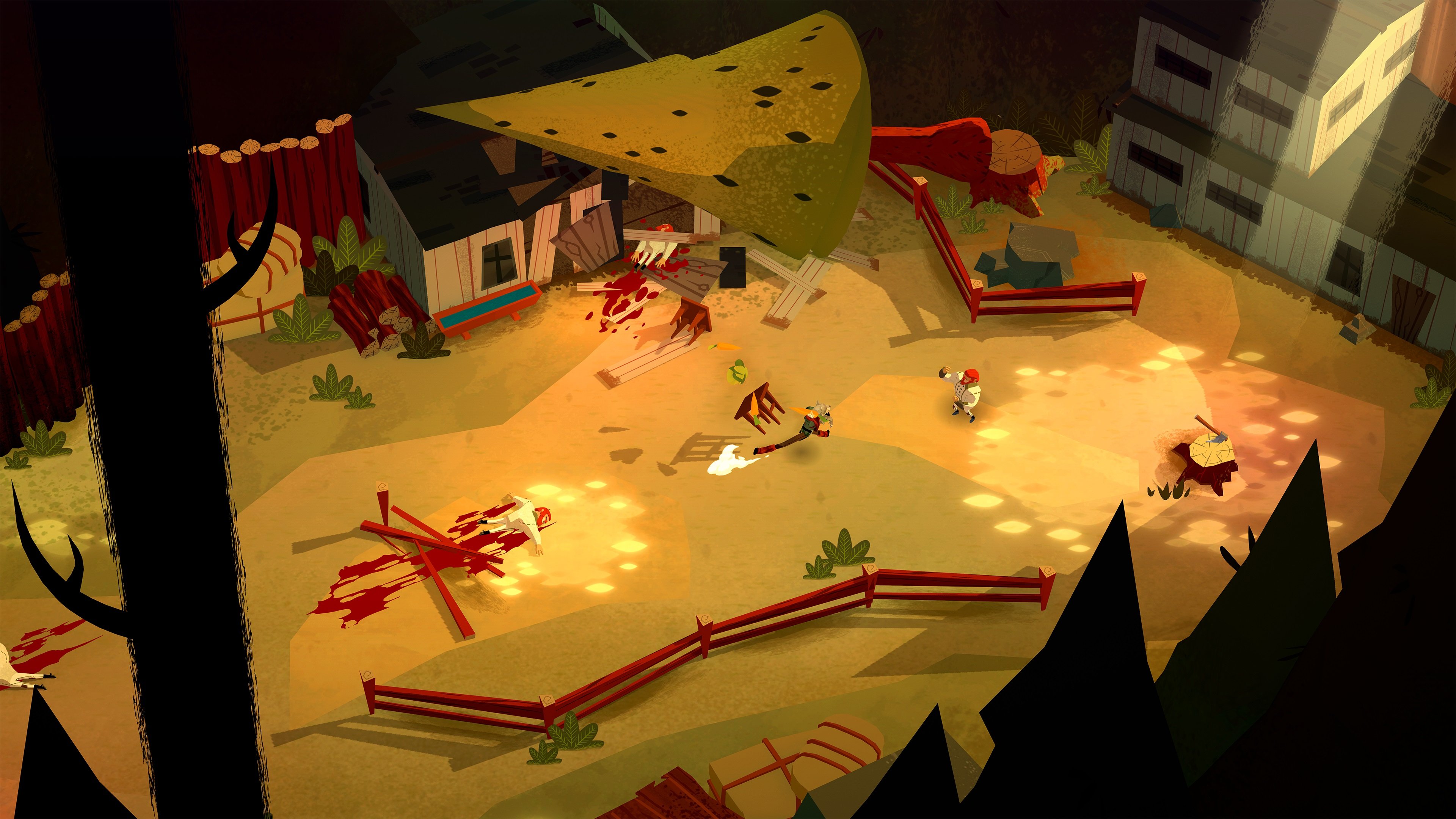 The full game will have several stages, each with their own signature weapon. There are plenty of secrets to find if you don’t mind going a little off the beaten path, and I enjoyed killing some of the enemies in the demo with unusual weapons like fireworks and what looked like a chain chomp from the Super Mario games. There are also bosses, each of whom has their own animal-themed headwear and provides a more significant challenge than the mooks you mow down in the regular levels.

There wasn’t much story available in the demo I played, but the developer told me the full game will have a campaign mode which should take players roughly seven hours to complete, or more if they want to go after all the collectibles. Completing the story will unlock a New Game + mode which makes every weapon available from the very start and lets players experiment with their favorites.

Even though it’s in an early state Bloodroots was a hell of a lot of fun, and I’m looking forward to its release. The game is in development for the PC and all major consoles, and should be ready to play sometime after the Spring of 2019.