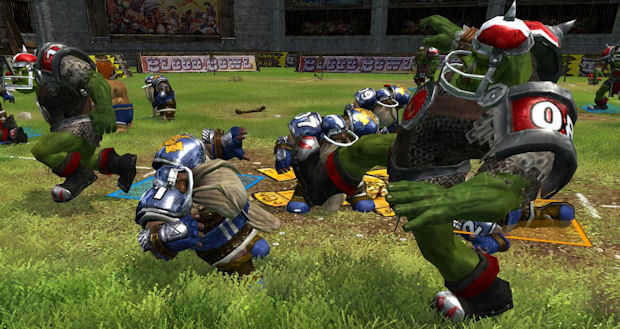 Just when I was wondering what on Earth happened to Blood Bowl, here comes Southpeak to announce that the Warhammer-flavored football game is due for a retail release in January 2010.

Previously only available as a downloadable PC game and released with very little fanfare, a boxed PC version, an Xbox 360 version and a PSP version are all planned. The PSP version will arrive later than the others, coming some time in the Spring.

Blood Bowl quietly hit the downloadable market back in June and received fairly decent reviews. I’ve been meaning to play it for ages, even though a review would be ludicrously late, but this news might make it relevant again. In any case, this is coming out very soon. 2010 is f*cking full of stuff.

Just in time for the human football season’s end, SouthPeak is here to offer a less than traditional spin on classic football. With a rich heritage of table-top gaming, Blood Bowl is poised to tear your Windows PC, Xbox 360 and PSP system a new end zone. With turn-based gameplay and each play teetering on the roll of the dice, Blood Bowl will keep you on the edge of your seat from kickoff to final score. Inspired by the infamous Warhammer® series, Blood Bowl brings some of the most vicious gameplay, dirty tricks and lest we forget – secret weapons – to the field in an all new way.

“We’re thrilled to have a part in bringing a proper retail version of Blood Bowl to North American gamers on Windows PC, Xbox 360 and PSP.” said Aubrey Norris, Manager of Human-Orc Relations at SouthPeak. “It’s never easy to get all these races to agree on something – but if there’s one thing they love its good competition with a lot of bloodshed!”

Blood Bowl’s retail Windows PC and Xbox 360 packages will kick-off in January 2010 with the PSP system version taking the field in Spring of 2010. If you’ve never seen a goblin thrown into the end zone by a troll to score a touchdown, then prepare to be amazed! More details are sure to pop up as the teams get themselves in order and the pre-season action begins.