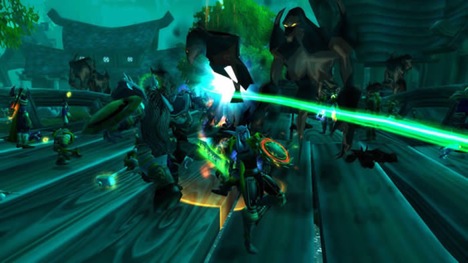 In a ferocious decision to leave no marketplace untouched by the taint of World of Warcraft, Blizzard has officially announced their arrival on iTunes. Starting today fans, enthusiasts, and crazy people will be able to download six different albums from an assortment of Blizzard’s biggest games. The albums that are being distributed are:

In the critically acclaimed movie Judge Dredd, one of the plot points indicated that the majority of Earth was uninhabitable because of climate. This “scorched” Earth was seen only as a refuge for the miscreants and elderly of Dredd’s universe. I feel like I live in this destitute and poisonous plain because of my lack of inundation by Blizzard’s products. Someone please convince me why we need action figures, a card game, forty limited edition collector’s packs and iTunes albums. I need to feel compelled to go back into the bubble of society and starting buying into this stuff.

The press release is available after the break.

IRVINE, Calif., Sep 04, 2008 (BUSINESS WIRE) — Blizzard Entertainment, Inc. today announced that a wide selection of music from its popular games has been added to the iTunes store. Much of this music was originally available only in collector’s editions of the games, or at special events such as the company’s BlizzCon(R) gaming convention. Six Blizzard Entertainment(R) soundtrack albums are currently available:

The albums have been placed on a new Blizzard Entertainment hub page within the iTunes store. This page also hosts content such as the BlizzCast(TM) podcast and trailers and gameplay footage from upcoming Blizzard Entertainment games, with more material to be added in the months ahead. In addition, the “Diablo III Overture” from the company’s recently announced action role-playing game, Diablo III, is available as a single and has been highlighted as a Discovery Download, making it free to download until Tuesday, September 9.

Players in the regions iTunes serves (North America, Europe, Australia, New Zealand, and Japan) can purchase the music at standard rates for each of those regions. For more information, please visit www.blizzard.com.

Best known for blockbuster hits including World of Warcraft and the Warcraft, StarCraft, and Diablo series, Blizzard Entertainment, Inc. (www.blizzard.com), a division of Activision Blizzard (NASDAQ: ATVI), is a premier developer and publisher of entertainment software renowned for creating some of the industry’s most critically acclaimed games. Blizzard Entertainment’s track record includes ten #1-selling games and multiple Game of the Year awards. The company’s online-gaming service, Battle.net(R), is one of the largest in the world, with millions of active users.