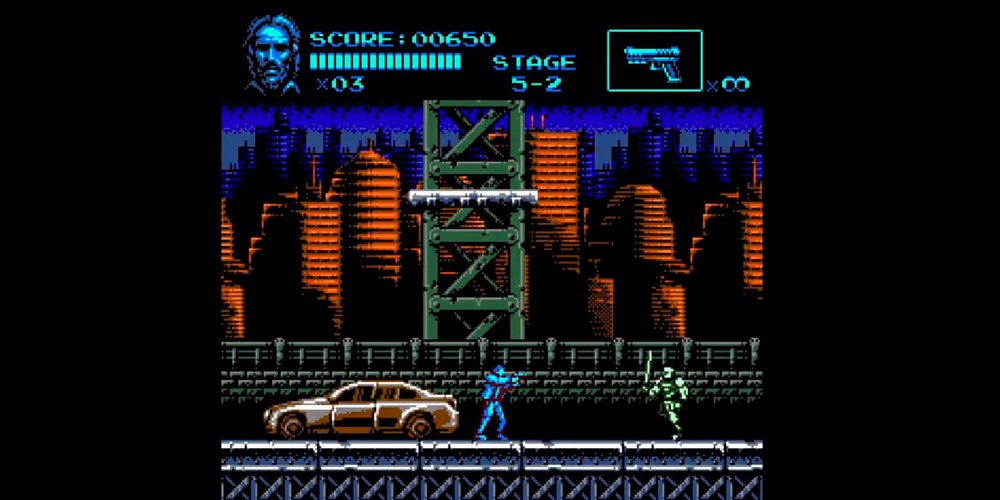 It wasn’t long ago that I was researching how many videogames Winona Rider Ryder has been in. The number was surprisingly low. From the looks of it, the same is true for her ex-boyfriend Keanu Reeves. Other than a few games based on Bill and Ted and The Matrix, he’s pretty much sat the whole digital revolution out. No game based on Speed. No game adaptation of My Own Private Idaho. He didn’t even appear in the unfortunately titled Johnny Mnemonic The Interactive Game The Movie.

They’re both slowly coming around though. Winona stars in the upcoming Stranger Things 3 game, and Keanu appears in both Fortnite and in John Wick Hex, directed by Mike Bithel. When it rains virtual Keanus, it pours.

Now Joy Masher, the creators of Odalus, Oniken, and the upcoming 2D indie Halo-like Blazing Chrome have done their part to make that Keanu storm all the wetter. They’ve put together a short tech demo for a John Wick NES game that nails the neon-grime feel of the films. While they won’t be doing any further work on the fan title, they’ve uploaded all the assets for public use, so if you want to finish what they started, it’s all on you. Just don’t shoot the dog. Things don’t go well for people who shoot the dog.

for #screenshotsaturday I made a small tribute to a movie I love, John Wick!
Its a fake John Wick NES game, the music is by my friend @Dominic_Ninmark , its a nes remix of “shots fired” Hope you guys enjoy it! =D#JohnWick #pixelart #joymasher #KeanuReeves pic.twitter.com/NS8cjOxYTw