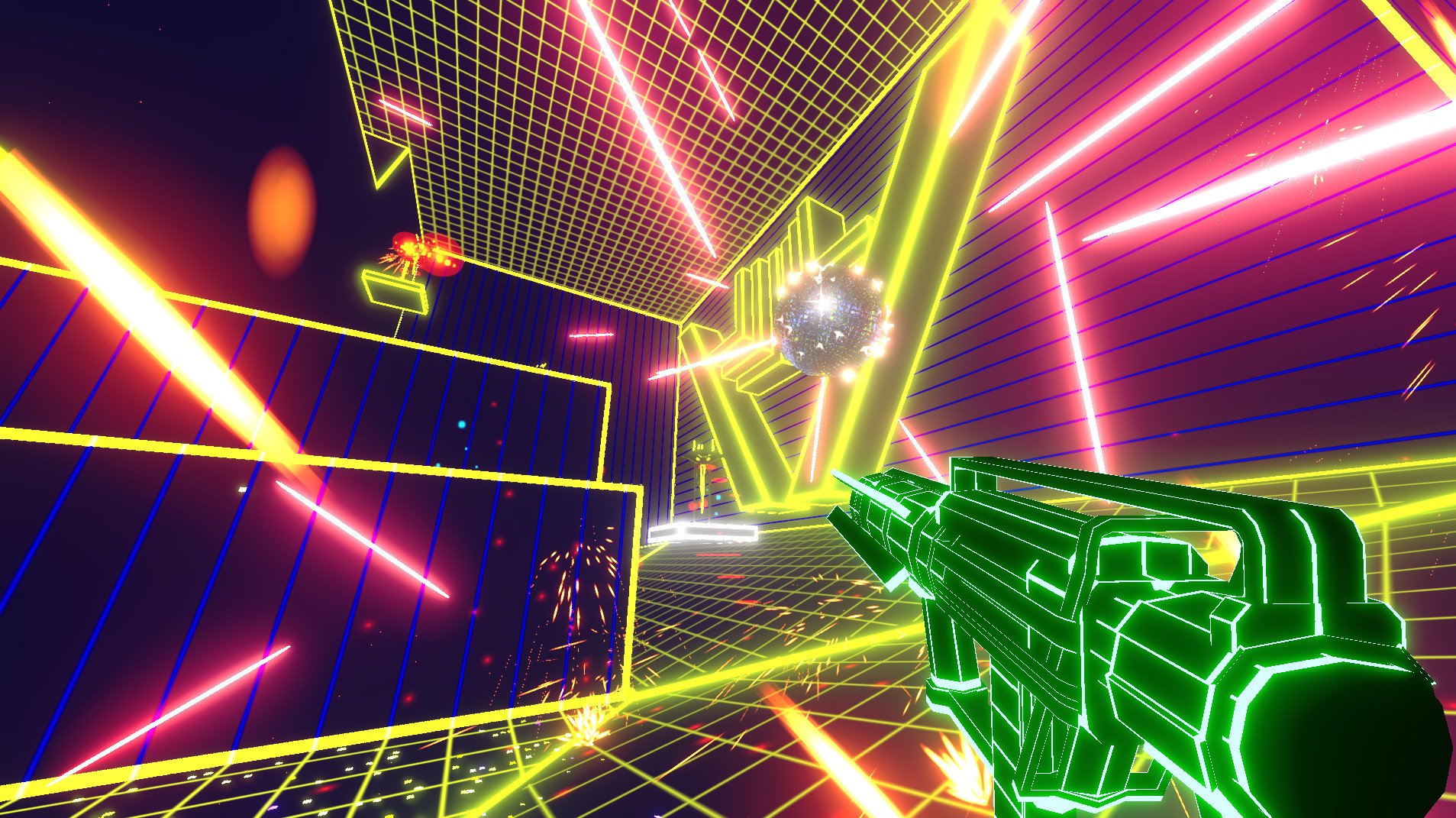 Disney’s Tron is so ripe for video game adaptation, but there has been a curious lack of Tron inspired games. We’ve only seen a few official titles and basically nothing else I can think of. What happened to those neon colors and harsh geometric shapes coalescing into an 80s view of the future?

At the indie arena at RTX this weekend I happened across Black Ice, a game that could be mistaken for a Tron 2.0 sequel. It is a first-person shooter set in some digital space that sees you hacking terminals, stealing information, collecting tons of guns, and shooting weird digital creatures.

To say it evokes the style of Disney’s cult classic is an understatement, though, in action, the best comparison one could make is Serious Sam. This is a wave-based shooter that bears a similar structure to Croteam’s tough as nails game. There is hacking involved, but you simply start the process and then deal with security while a progress bar fills up. You get locked into small combat arenas where the hack won’t finish until every enemy is dead.

The demo at RTX was very basic, going over a few of the mechanics in-game with limited text. While I didn’t really experience it, Black Ice has an XP and upgrade system that lets you power-up your character with a variety of perks. By killing enemies and going for bigger hacks, you’ll gain more XP and can begin to customize your character to fit your play style.

Taking a cue from Borderlands, your guns are actually randomized as you pick them up. The only way to find newer and better weapons is to kill enemies, though there aren’t specific guns you can find in the environment. The guns in the demo were limited to an assault rifle, a shotgun, and some weird orb launcher (clearly replicating a rocket launcher), though other weapons will exhibit elemental effects that can wreak havoc on enemies.

I also had the ability to launch a disco ball that would then shoot bullets in random directions. It worked great for the final hack of the demo, which saw me going to an RTX server and shutting down the convention itself. In there, the level design opened up a bit and had some slopes I needed to navigate around.

If you’re wondering about procedural generation or anything like that, you can let out a sigh of relief. Black Ice features a proper campaign mode with specifically designed levels. There seems to be a main hub world with missions you’ll take on, but you don’t need to worry about random dungeons or endless possible level combination. If you somehow have nine other friends who love Tron, first-person shooters, and hacking, Black Ice also supports 10-player cooperative PvE for the campaign mode. PvP is listed as a feature, too.

About the only negative I can lobby against Black Ice is the HUD is a little busy. I wasn’t exactly sure where my health was and it wasn’t immediately clear guns didn’t work on ammo. Everything operates on a cooldown like an RPG, but most of the guns I fired had less than a second of waiting between shots. I also don’t know how far this game’s campaign mode goes, since the demo was so micro-focused on providing a vertical slice of the experience. That could be a positive or negative, but at least the short session I had was fun.

Creator of the game, Garrett Cooper, actually launched Black Ice four years ago on Steam Early Access. He has been continually adding updates to it every couple of months. While I’m not sure how much content is currently available, he has mostly been developing the shooter on the side. He told me he is gearing up to really focus on it in the near future, though there still isn’t a firm release date on the cards. If you can’t wait for the final launch, though, Black Ice has full mod support to let you tweak it however you see fit.

Even without all of those cool features, I’m really just struck by the visual design. It can appear a bit basic, but there is just something about the Tron look that makes me feel at home. Disney’s unique vision of a digitized world still feels futuristic all these years later and I’m really surprised that more games haven’t aped what Tron started. Have we really only seen nine official Tron games in the last 36 years? Is no one interested in the idea of a world living within the machines that power our lives?

In any case, Black Ice is quite a bit of fun. It might not be able to hold my interest over a prolonged session, but its amalgamation of different genres coupled with its fetching visual design certainly makes it stand out from the pack.