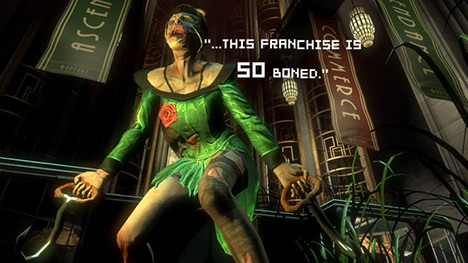 Nary three months after the BioShock 2 announcement, Take-Two Interactive chairman and talking head Strauss Zelnick casually mentioned to investors in a conference call that BioShock 3 is on its way.

Speaking about the recently-announced, Verbinksi-directed BioShock movie, Zelnick said, “It’s more likely it would be released coincident with BioShock 3.” While I can’t necessarily blame Take-Two for trying to make some bank on an amazing IP, I have to admit that this is akin to a dagger in the kidney. No platform, release schedule, or studio was mentioned in the pseudo-announcement.

With a sure-to-be successful PS3 port, a sequel, and a movie, Jack Ryan seems to be doing pretty well for himself. I try (usually unsuccessfully) to stay out of the internet hivemind, but this time I’m just going dive right in: do not want. BioShock 2 has considerable narrative concerns of its own, and I can’t begin to imagine where a third game will lead. I tend to give developers the benefit of the doubt in most cases, but for the time being, I’m aggressively pessimistic about BioShock 3.

[Via IGN, via Clockwork’s c-blog]