When Beyond: Two Souls released at the end of 2013, it epitomised not just the lofty ambitions of creator David Cage, but also the capability still lurking in the PlayStation 3’s ageing infrastructure.

But whilst it’s difficult not to be mesmerised by the state-of-the-art facial and motion capture and that ambitious, cinematic storyline, as the credits rolled that first time around, I laid down my controller and felt nothing but a nagging sense of fulfillment. Despite the glossy polish and Hollywood glamour, it was as though Beyond: Two Souls was a richly painted optical illusion, a beautiful but achingly – frustratingly – two-dimensional experience lacking any meaningful depth.

Ellen Page and Willem Dafoe lead an otherwise unremarkable cast in the tale of Jodie Holmes, a seemingly ordinarily girl blessed – or cursed, depending upon your viewpoint – with an extraordinary secret. Abandoned by her adoptive parents (all the hallmarks of a superhero origins tale, I know) and essentially brought up by Dr. Dawkins, her parent-by-proxy at the paranormal agency at which she lives, Jodie’s tale is at once both a Teenager Simulator and an episode of the X-Files, her life inevitably dictated by the fiercely protective entity, Aiden, inexplicably linked to her. 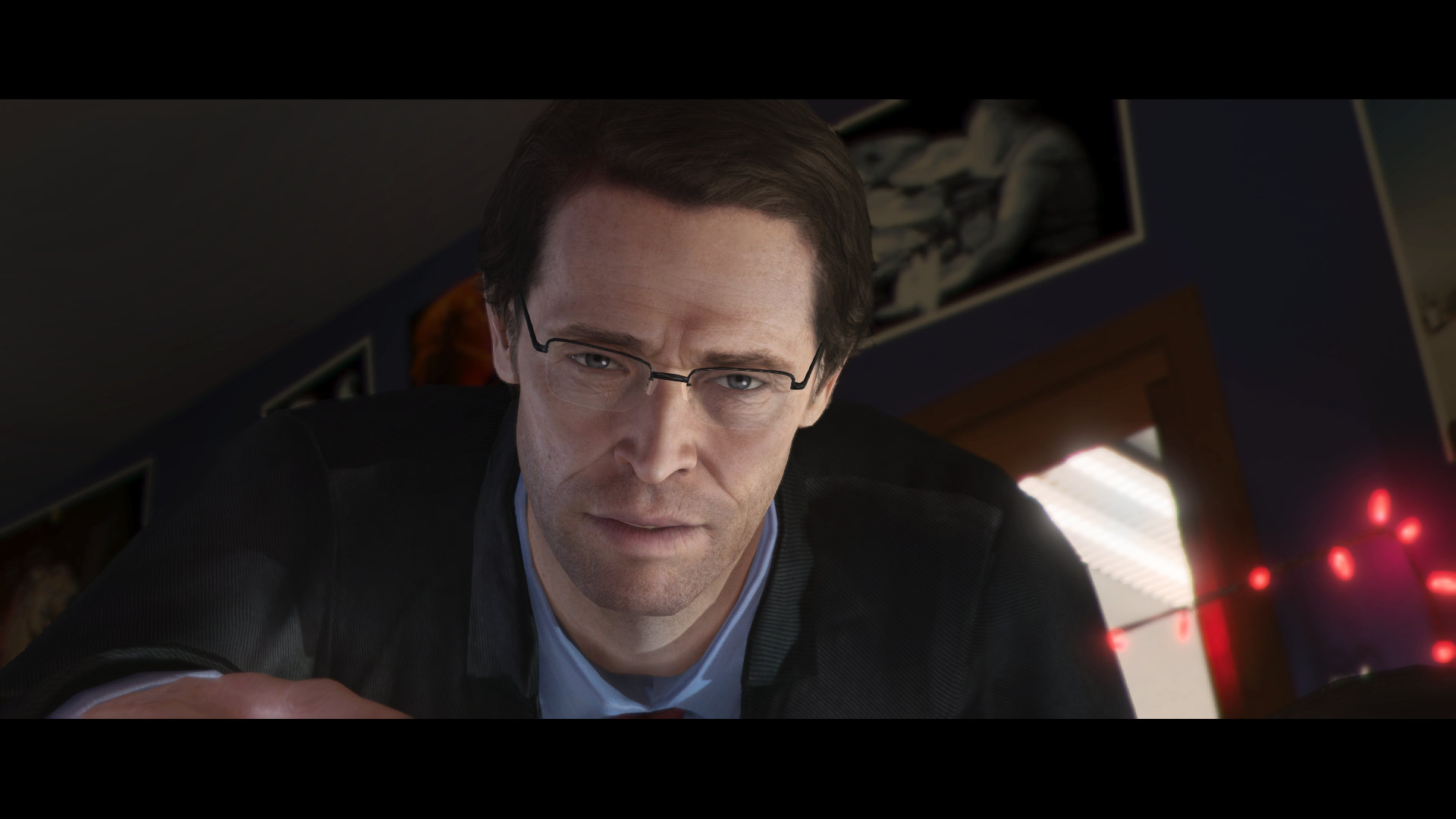 The story unfolds as we step into non-sequential chapters of Jodie’s life, watching – and occasionally orchestrating – the girl’s passage from child, to teen, to woman. The vignettes focus on the key moments of her life that shape both her growth and her relationship with Aiden, but also those rites of passages familiar to all of us who’ve rebelled (if unsuccessfully) growing up.

While Page’s portrayal of protagonist Jodie Holmes is perfectly fitting in a perfunctory kind of way, her story fails to resonate fully, possibly because the choppy, Lost-esque out-of-sequence storytelling means you rarely grow with her, your time together boxed into disparate adult/child/adult/child again chapters that feel oddly insular.

There’s also very little consequence to the decisions you directly influence. Regardless of what you choose to do – or don’t do – to your emotionally-frozen father or those assholes in the bar, the story marches on regardless, with only a handful of actions having a meaningful impact on the story before you.

It’s here where we welcome one of the PlayStation 4 version’s new, and most requested, features. If you were put off by the original game’s pick ‘n’ mix story delivery you can now choose to explore Jodie’s tale in the full chronological order. While the original time-jumping version is (naturally) still available, it offers a fresh take to those who who’d like to take an alternative – and perhaps more comprehensible – route to the game’s finale. 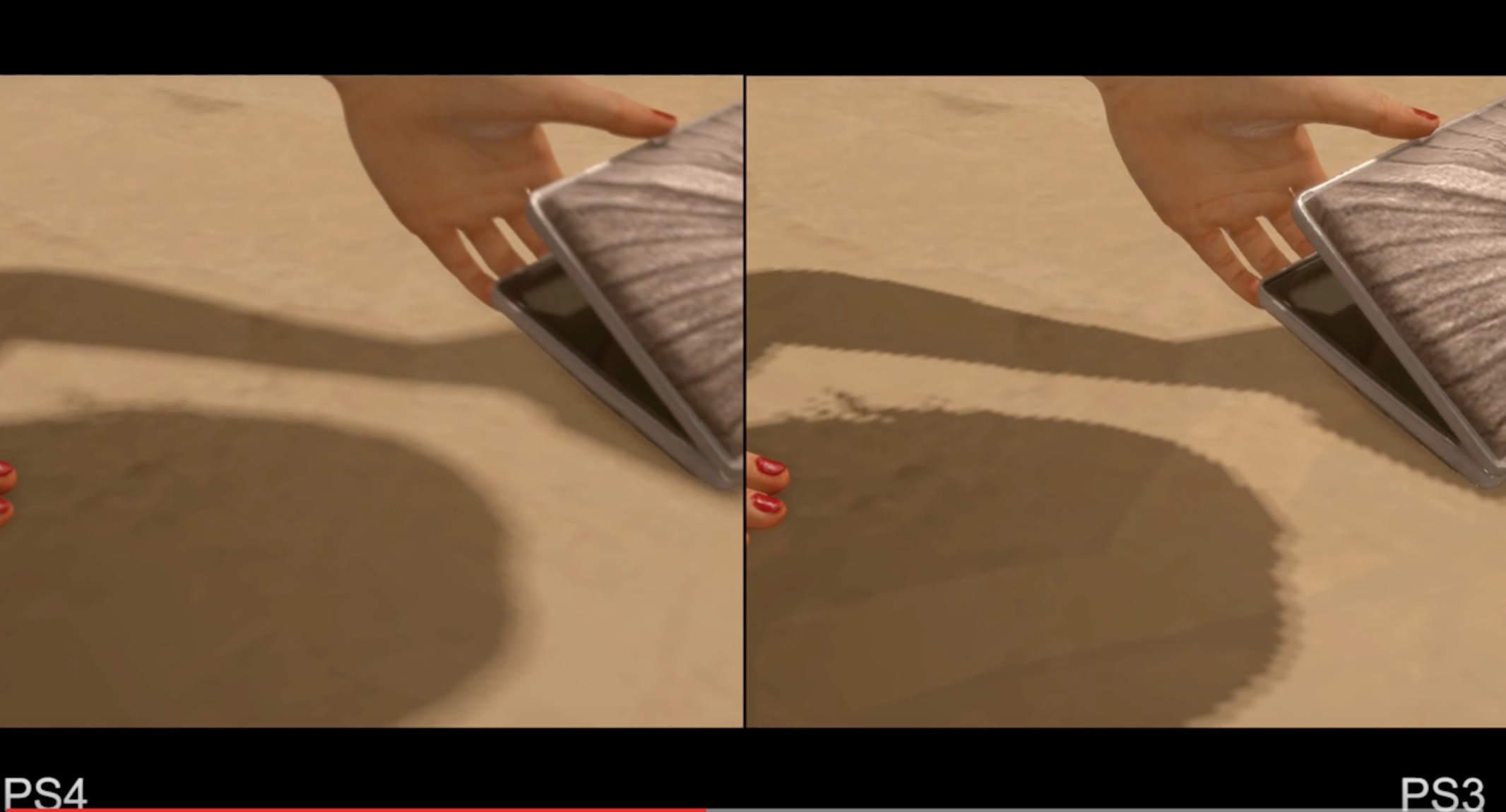 The original PlayStation 3 game occasionally spluttered with the weight of Quantic Dream’s boundary-pushing, but the PS4 remaster performs sweetly. Sony are keen to ensure we know about the 1080p rescale and enhanced graphics – which include motion blur, bloom, field of depth and boosts to the game’s celebrated lighting/shadowing effects – are what sit at the heart of this remaster, and to be honest, the game delivers here in every sense.

Whereas the PS3 version occasionally hiccuped with visual noise and juttery transition, for the most part, the PlayStation 4 version handles the strain with little discomfort. Two years ago there was little we could critique about the graphics (come on, it looked amazing on a near-end-of-life console) and now, able to compare the new with the old, we can see the tangible improvements. The lighting looks and feels organic, with the corresponding shadows smoother and more blended. Most marked perhaps is the introduction of camera-sensitive field-of-depth lens, a tool that naturally softens the fore- and backgrounds with beautiful results, albeit occasionally at the cost of sharpness.

Though it does run at 1080p, PlayStation 4’s version of Beyond hits that marker by compromising on your ratio, presenting a 1920×817 resolution with a cinematic framing. While the assets are left mostly untouched and recycled from the PS3 version, in some places – such as the Embassy, for instance – a side-by-side comparison (thanks, Digital Foundry!) shows that though most PS3 assets have been recycled, in some instances the graphics have been replaced or improved, with wallpaper and flooring textures in particular benefiting from the refresh.

As you might expect, however, the things that might have frustrated us the first time around – Aiden’s cumbersome control scheme, for instance, or the spoon-fed narrative waypoints – remain untouched. 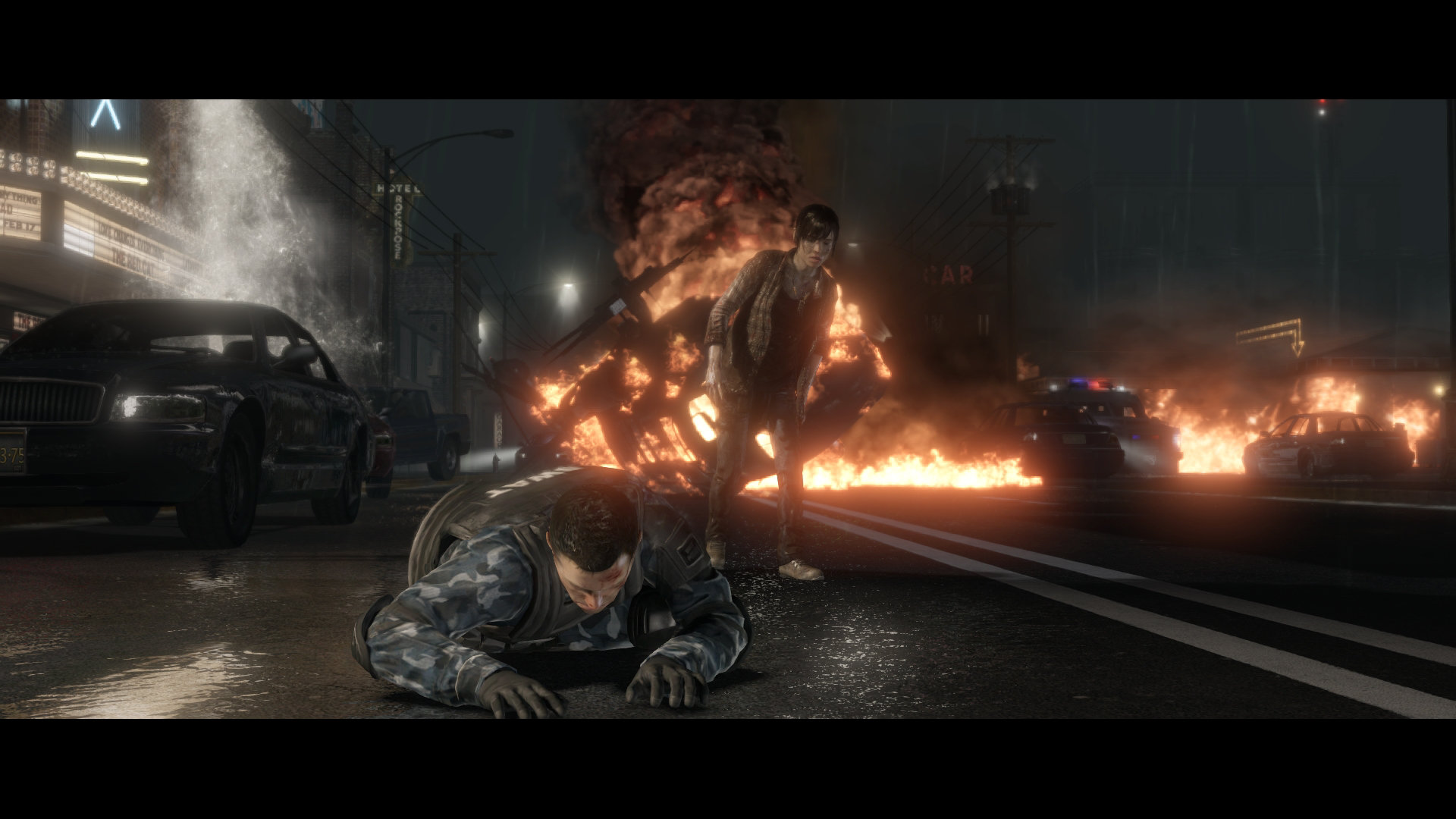 I didn’t enjoy my time operating as Aiden in 2013, and nothing’s changed. Aiden can now (kind of) communicate with you via the speaker in your controller, but if it’s designed to heighten immersion, for me it simply achieves the opposite. And once again, the possibilities here – your natural curiosity to explore as Aiden, perhaps, or your desire to take control of an undesirable – are curtailed. The pacing still feels mismatched and uneven, with some chapters whizzing pass in minutes, and others feeling like they’re been (unnecessarily) drawn out for hours … particularly as the gameplay’s irregular prompts are sometimes painfully overt, whereas in others they’re frustratingly absent.

Also new, besides the spiffy graphics and all, is the Telltale-esque stats page at the end of each chapter. Though some may flinch at the spoilerific alternative story branches that hint at opportunities you may not have known was possible, for me, it gave a tantalising glimpse at the alternatives, and offers huge temptation to jump back in and replay alternative routes… as well as ascertain what were the popular – and not so popular – decisions taken by other players facing the same dilemmas.

Whilst the things that bugged me before still annoy me, I wasn’t sorry that I replayed Beyond: Two Souls. Regardless of the execution, Beyond remains an ambitious project, and I’m all for developing playstyles that deviate from what what’s become the norm, particularly if doing so attracts hitherto “non-gamers” to our beloved pasttime. Quantic Dream’s stunning visuals and engaging narrative mean the game just falls on the right side of boring – it’s just the rehash of those QTEs and the curiously disjointed storytelling that frustrates, not the tale nor the presentation itself. 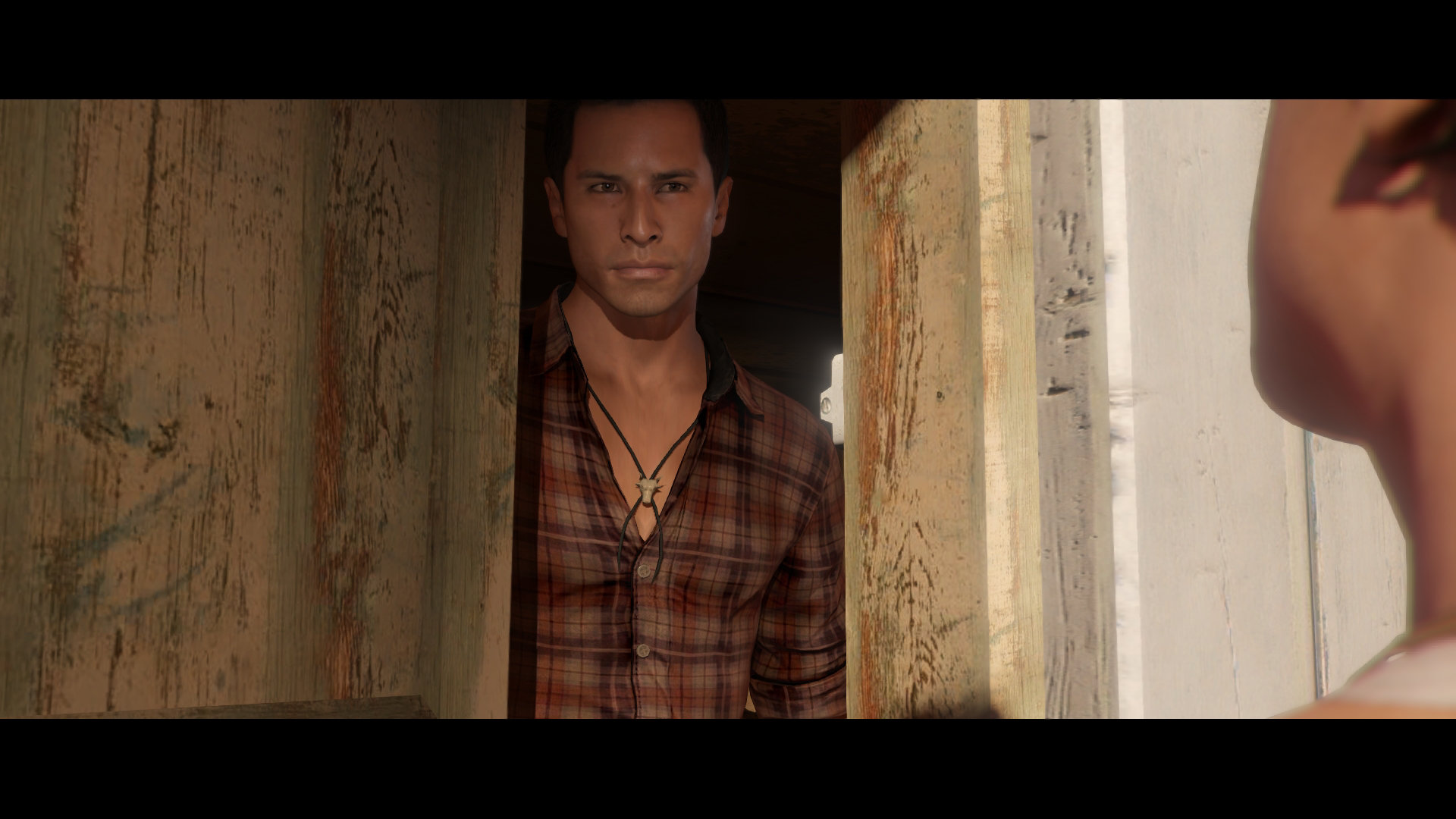 If you enjoyed it on the PlayStation 3 and relish the chance to revisit Jodie’s story, now boosted by enhanced visuals and the new Experiments expansion – as well as the chance to live Jodie’s life chronologically – then you won’t be disappointed. But if you intentionally side-stepped Beyond: Two Souls the first time around, there’s probably little here that will tempt you back… particularly if you like your storytelling charged with meaningful agency.

For those who missed out last generation and remain intrigued by Quantic Dream’s unique and ambitious game? I can’t say it isn’t pretty. It’s just a shame that that’s all it is, really.