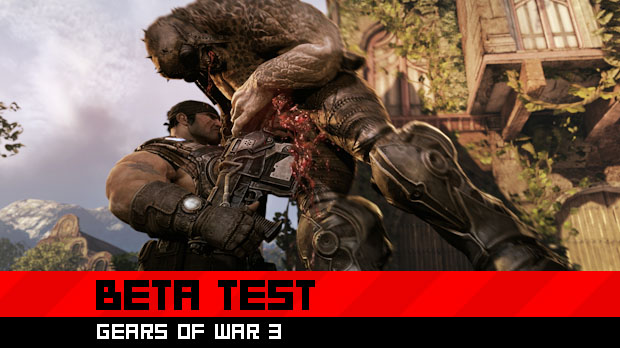 Gears of War 3‘s online beta launched for a select few people this past week, and Destructoid was there in full force to scratch one grub and screw up our active reloads. Oh, and fail to run into Ice-T, much to our chagrin.

Being one of the staff’s biggest Gearheads, I gave the beta an extensive workout in order to provide my thoughts. Please feel free to read on and see what you can look forward to when the beta opens up for all participants next week! 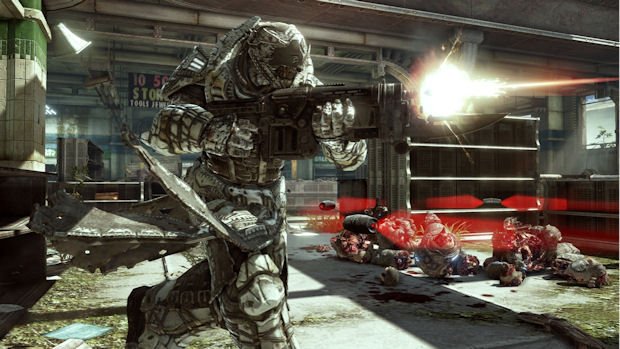 One thing to note about Gears of War 3 is how it feels faster, more intense, and “busier” than past games. The maps seem slightly scaled down and contain more choke points than past titles, allowing for increasingly chaotic battles where anything can happen and blood sprays to the far corners of the earth.

The inclusion of ribbons and medals makes for a more engrossing experience. As with Achievement progress in Gears of War 2, in-game pop-ups constantly inform the player of their accomplishments and how close they are to unlocking new medals. There are medals for almost anything — ending a match with an execution, getting a set number of kills with every weapon, using an opponent as a human shield, and much more. Practically every little trick in the book will be recognized and rewarded.

Speaking of rewards, Epic has done an amazing job of giving players more than just bragging rights as an incentive to keep playing. The Gears of War 3 online experience is all about personalization and the unlocking of new and cooler gear. From extra characters and costumes to badass new paintjobs on the weaponry, there’s a lot to work towards. The player rolling into a match with a flaming Lancer is instantly the coolest guy on the battlefield. 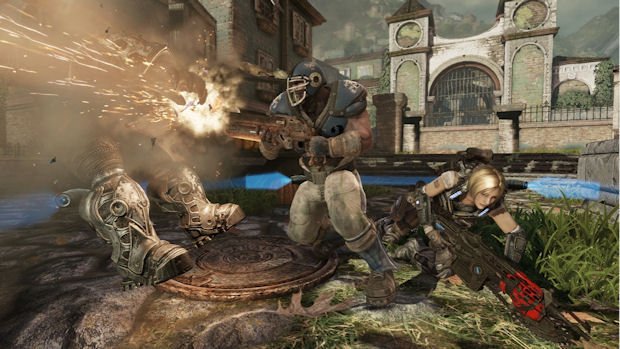 Although the gameplay is far more engrossing and the action feels instantly satisfying, the core gameplay of the Gears series remains the same. As always, it’s all about heavy, clunking, manly brutality. Classic weapons like the Lancer, Mulcher and Longshot are all there, and behave how they always have. There’s still a difference between downing a player and finishing them off so they can’t be revived — there are also new executions, including a beautiful one where a Locust rips an enemy’s limb off and beats the rest of the body to a pulp with it.

Unfortunately, the preservation of the core combat has led to the survival of perhaps the series’ most controversial aspect — the shotty. Yes, the shotgun is as devastating and annoying as ever, and once more appears to have turned a cover-based shooter into one where certain people roll around the map, trying to get close enough to one-hit-kill each other. What’s more, there are now two types of shotguns to choose from — the traditional Gnasher, and the one-shot Sawn-off Shotgun, which essentially guarantees a kill if you get close enough with it. The tighter maps make that circumstance far easier to realize, too.

I am personally on the side that dislikes the shotgun, as I feel it changes the entire point of the game. I find an online cover shooter more compelling than an online roly-poly simulator, and it’s a shame that the shotgun is still such a dominating part of the online mode. What’s more, the shotgun fans have been catered to rather than diminished. Good for them, I guess. 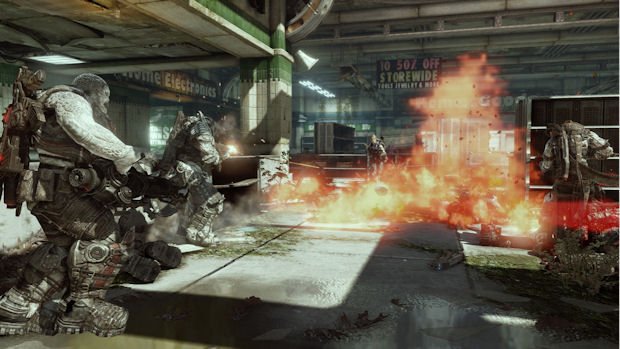 Even as annoyed as I am at the shotguns, I still keep playing because Gears 3 is looking — to put it bluntly — badass. One major positive is how much personality the maps have this time around, with traps and gimmicks lending several of them a unique flavor. Thrashball, for instance, takes place in a devastated sports stadium, and features a jumbotron in the center of the map which acts as a Sword of Damocles, regularly struggling to stay attached to the rafters. It’s a losing battle, however, and before the end of the match, you can expect to see it drop — and hopefully squash a few players on the enemy team.

The beta includes three modes, one of which is the brand new Team Deathmatch. Although I’m always a bigger fan of capture-point modes such as King of the Hill, I have to say that Gears 3‘s TDM is an excellent new take on a traditional gametype. Rather than reach a certain number of kills, teams win by depleting the amount of lives on the enemy side. Each team has a limited pool of respawns shared by the entire team. Every time somebody dies, they take another respawn, until their side has been whittled down to a final, finite crew.

The pooled respawns put an increased amount of pressure on players, as dying now negatively impacts the entire team, and dying the most will make you the biggest liability. Not to mention, when respawns have finally been depleted and you know you’re on your last life, the tension is unparalleled. This new twist is, on the surface, a rather small one, but it changes the dynamics of a traditional gametype quite dramatically. 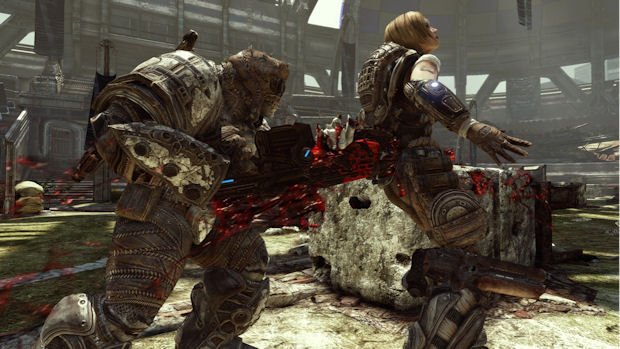 Gears of War 3 so far feels like the culmination of everything the series has been working towards. It’s been refined to a shiny polish, and has taken some of the best elements of other online shooters without sacrificing the heavy feel and ludicrously violent combat that sets it apart from the competition. Outside of the shotgun issue, there’s simply very little to complain about. Matchmaking is slick and quick, I am yet to experience any of the game’s famous online lag, and overall the experience is more engaging and addictive than any previous Gears title.

Of course, whether the full retail experience preserves all this and adds more remains to be seen, but it’s looking damn good to me. I was already excited for Gears of War 3, but having spent a week in the beta, my hype levels are now dangerously high.

Oh, and the new incendiary grenade, that burns its victims to a screaming crisp? To quote Marcus Fenix; “Nice!“