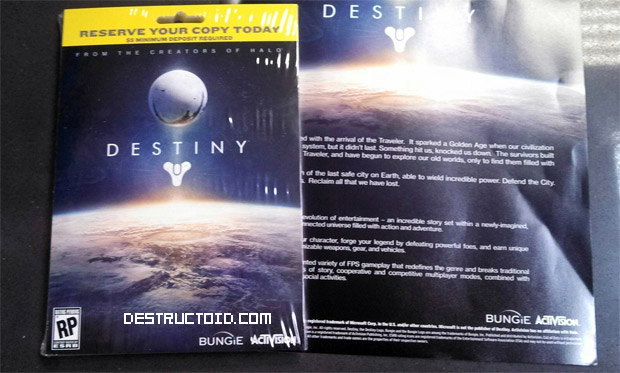 Ahead of official announcement this weekend

[Update: We’ve been sent another shot of the Destiny flier, this time with a much better look at the copy. Find it and the backside of the pre-order card, which specifically lists Xbox 360 and PlayStation 3 as the release platforms, in the gallery below.]

With Bungie’s reveal of Destiny scheduled for Sunday, the wait is almost over. In the meantime, however, Destructoid has received a photograph of some Best Buy promotional materials including a pre-order card and a flier which has some details about the first-person shooter.

It would have been nice to see all of this text unobstructed, but beggars can’t be choosers. There’s talk of survivors exploring old worlds; customizable weapons, gear, and vehicles; genre-redefining gameplay; and cooperative and competitive multiplayer modes.