When you strap on armor and wield your steel against an army of orcs in Lord of the Rings: War in the North later this year, expect to have some help. I’m not just talking about two friends, either. We’ve already extensively covered this three-player cooperative action-RPG; no doubt you’ve already formed your Fellowship within your own social group.

No, I’m talking about a big ass eagle. At a pre-E3 event a few weeks back, developer Snowblind revealed that players will be able to call upon Beleram, one of the Great Eagles of Middle Earth, to assist in battle. I saw him swoop in and tear an enemies’ head off in my hands-on, and in the game’s E3 trailer (above) he straight up knocks a troll on its ass.

I guess if you’re going to be fighting a war in the North, it’s best to have a big ass eagle on your side. 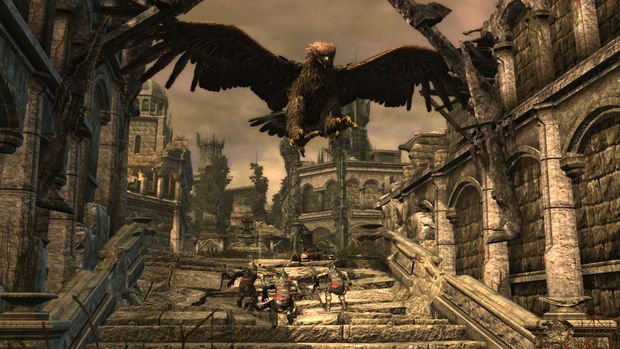 In a short introductory gameplay demo, three Snowblind developers walked us though an area where our three heroes must free Beleram from chains. He’s being held prisoner, shackled to a hulking stone slab. As our “three bright flames of courage” approach, they see Beleram being tormented and teased; the ordinarily formindable eagle can do nothing but snap at (and miss by a nose) his aggressors with an imposing beak.

Heading into battle, the three fight their way through a wave of guards, hacking and slashing, burying arrows into unfortunate skulls. Farin, the dwarf of the Fellowship, uses a war cry which attracts enemies to his position. While the opposition storms the short and stout warrior, a ranger named Eradan evokes a stealth ability to sneak through and begins to bash away at the chains holding the Eagle captive. With at least one of his feet free, Beleram swipes his sharp talons at one of his captors, sending him soaring through the air. With all of the fetters eventually snapped, Beleram takes the opportunity and flies off towards the sky. But it’s not the last you’ll see of him.

Like Snowblind’s previous titles — Baldur’s Gate: Dark Alliance, for instance — War in the North will focus heavily on loot. We’re talking all manner of stuff here, “literally thousands of items” I’m told, including unique bits of weapon and armor. But among this loot you may find feathers which can be used to call upon Beleram, who will swoop into battle and do some serious damage to your foes. 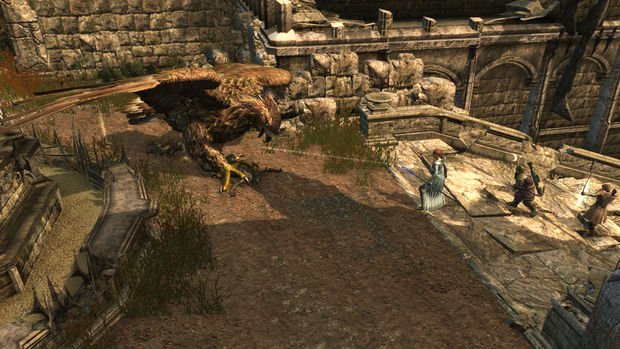 Watching him in action, I couldn’t help but think of the magic in Sega’s Golden Axe, where the single press of a button rains down hell and clears an area. War in the North‘s Beleram may be even more satisfying, however. While his descent happens quickly, you’ll want to stop and soak it in. Because the game proudly wears its M rating, you might see him take off limbs, or crash into a crowd of enemies with the expected barbaric results. As gratifying as it was to watch him in action, you’ll have to be conscious of when and when not to use your feathers; don’t expect them to be falling out of the purses of every enemy or hiding in every chest.

As I write this, War in the North should have probably been on store shelves. Warner Bros. and Snowblind first revealed the game a little over a year ago, and its release date seems to keep getting push back further and further. Based on how I’ve seen the game progressing over the past year, that extra time certainly hasn’t been wasted. Combat and the overall feel of the game is much improved, even since the last time I played it, which was only a few short months back at GDC.

The latest release time frame for War in the North is simply “2011.” Based on how far along things are looking and feeling, I’d guess it won’t be too long before gamers are dropping Beleram Bombs all across Middle Earth.