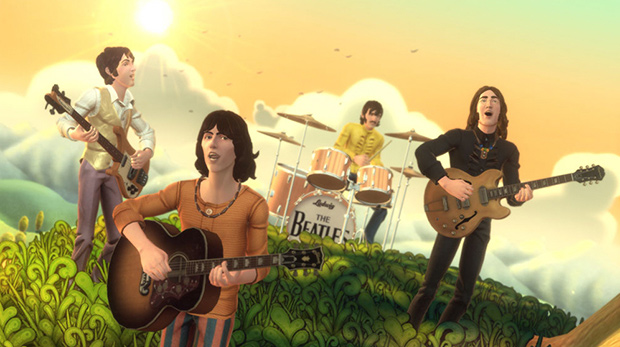 The Beatles song “All You Need is Love” was released exclusively on Xbox Live as DLC for The Beatles: Rock Band with the word that a portion of all sales would be donated to Doctors Without Borders, a charity organization bringing medical care to people in countries who can nary afford decent treatment. How successful has the program been? $217,780 successful, that’s how.

In terms of total downloads, that’s over 150,000 times that the track has been downloaded. Not a bad little haul.

If you still want to do a little good and get something back in the process beyond a good feeling, you can still download the track and have your little bit go towards the organization. You’re running out of time, however. The charity drive comes to its conclusion this Sunday, January 31st.

A full press release, including details of what the organization has been doing to help those affected by the earthquake in Haiti earlier this month, resides after the jump.

MICROSOFT, APPLE CORPS LTD, MTV GAMES AND HARMONIX RAISE $217,780 FOR DOCTORS WITHOUT BORDERS WITH “THE BEATLES: ROCK BAND” ON XBOX 360

Download “All You Need Is Love” from Xbox LIVE by January 31, 2010 to help Doctors Without Borders

“There’s nothing you can do that can’t be done.” An inspiring lyric first performed by The Beatles more than 40 years ago still rings true today as Microsoft announced a total of $217,780 to date has been raised to benefit Doctors Without Borders/Médecins Sans Frontières (MSF) through the global sales of “All You Need Is Love” on Xbox LIVE and the limited edition “The Beatles: Rock Band” Xbox 360 consoles.

Microsoft, Apple Corps Ltd, MTV Games and Harmonix proceeds from “All You Need Is Love” sales will continue to benefit MSF, so those with New Year’s resolutions to spread love and peace still have a chance to join hands with more than 20 million Xbox LIVE members to make a difference. “We are incredibly grateful for the generosity of people around the world who have contributed to us through the download of “All You Need Is Love” and the sales of the one-of-a-kind Xbox console,” said Dr. Matthew Spitzer, president of the Board of Directors for MSF-USA. “It is because of funds generated from initiatives such as this that MSF was able to respond to the Haiti earthquake so quickly, providing urgent lifesaving medical care immediately in the aftermath.” he added. “With your continued support, we will be able to carry on our medical work in more than 60 countries to assist people whose survival is threatened by violence, neglect, or catastrophe. On behalf of our patients, MSF says ‘Thank You.’ ”

MSF has been working in Haiti since 1991, responding to emergency medical needs and ongoing medical crises in the country’s capital, Port-au-Prince. Because MSF was already running programs in Haiti when the earthquake struck – with over 800 staff already on the ground—the organization was able to quickly mobilize in the immediate aftermath of the January 12 earthquake. Staff members set up emergency triage centers and began treating people with major trauma wounds, fractures, and crush injuries. An inflatable MSF field hospital equipped with two operating theatres has been set up and is currently running, and MSF cargo planes loaded with emergency personnel and supplies have reached the country.

To date, MSF is running 15 hospitals in and outside of the capital, has treated over 6,000 patients, and has conducted nearly 1,000 surgical operations. MSF’s work, such as their immediate response to the Haiti earthquake, is made possible by unrestricted private donations to the organization. With the support of donors, MSF has been, and will continue to be, able to provide the best possible medical care for the people who need it most.

For every purchase of “All You Need Is Love” from Xbox LIVE between September 9, 2009 and January 31, 2010, the value of 112 Microsoft Points will be donated to MSF. For a complete list of countries where this donation offer will be available, visit www.xbox.com/thebeatlesrockband. In addition to downloading “All You Need Is Love” on Xbox LIVE, which will continue to benefit MSF until January 31, supporters are encouraged to visit the MSF Web site if they are interested in donating: www.doctorswithoutborders.org.