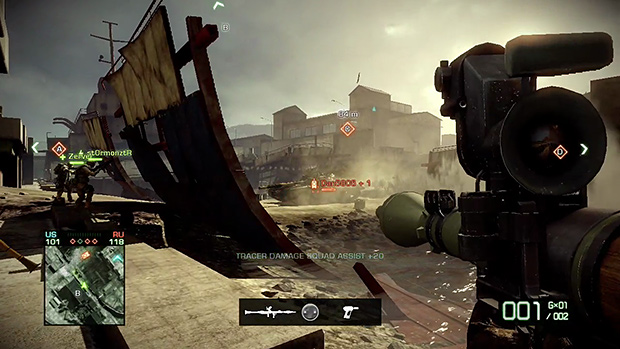 I’ve spent over 45 hours with the multiplayer portion of Call of Duty: Modern Warfare 2, but if this kick-ass gameplay footage is any indication, EA DICE’s Battlefield: Bad Company 2 may become my new favorite multiplayer FPS when it launches on March 2, 2010. Everything I’ve seen so far of this game can only be described as “intense,” and the game has a realistic look like few others before it.

We’ve taken some extensive looks at Bad Company 2. In November, Hamza wrote up a multiplayer preview, and Brad gave you his impressions (along with a Ten Minute Taste) of the PS3-exclusive multiplayer beta. In December, Ben PerLee got his own hands on the game’s multiplayer mode. The minute-plus of gameplay footage above is Episode 3 of EA’s “Battlefield Moments” series, and it’s set in the Panama Canal map. (For more Panama Canal action — if you can handle it — head here.)

Boy, I sure wish I’d been a part of the multiplayer beta. In any case, March is looking packed with potentially great games: there’s Bad Company 2 and MLB 10 The Show on March 2nd, plus Final Fantasy XIII, Just Cause 2, Dragon Age: Origins — Awakening, and God of War III later that month. And Heavy Rain is out at the end of February! HOLY. CRAP.