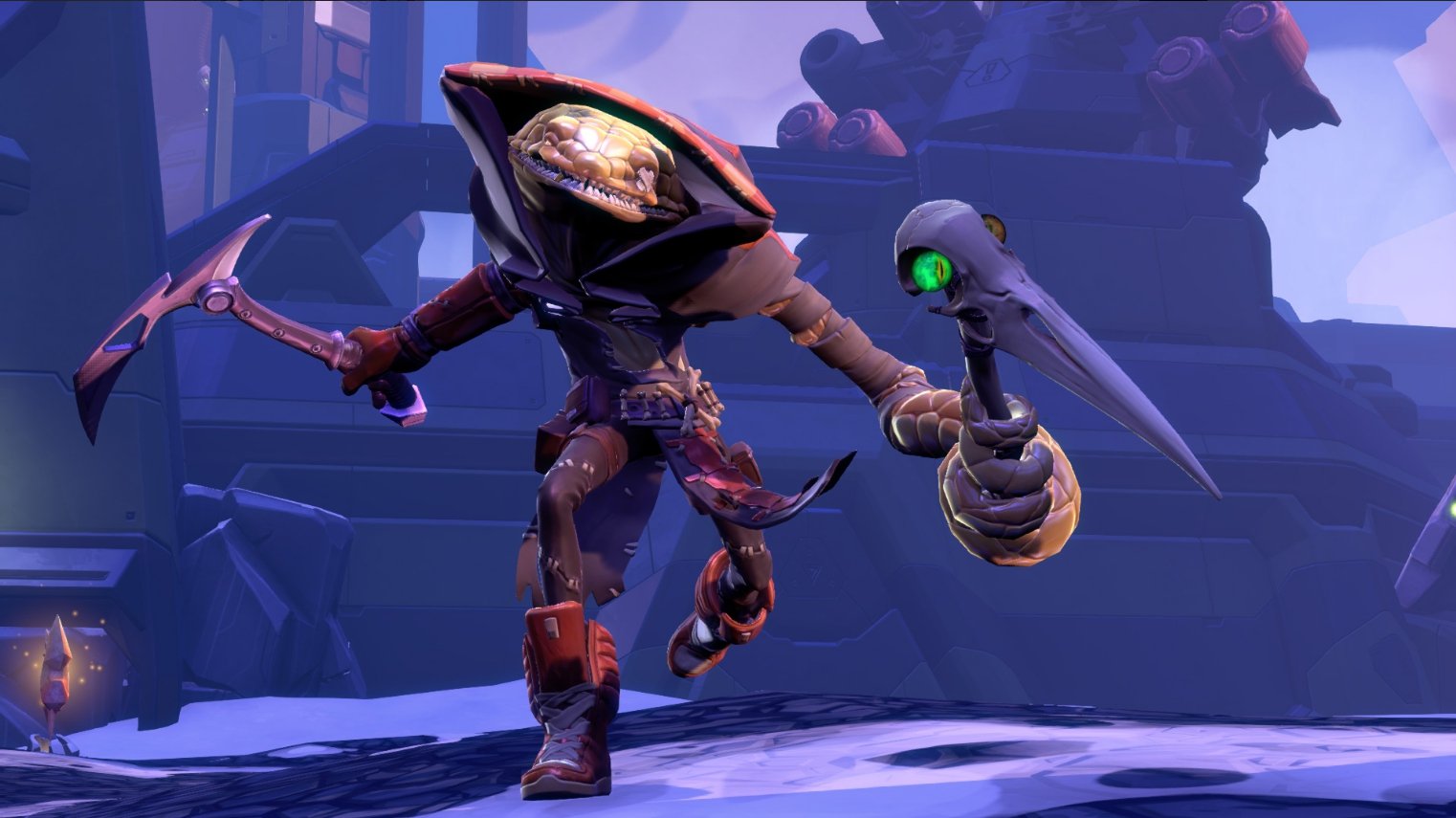 The 27th Battleborn hero Pendles becomes available for the general public on August 4 (to purchase with a non-negligible sum of in-game currency), but he has been available for season pass holders for the past few days now.

I took the stealthy snake through a few story missions and a bunch of competitive multiplayer, and he is now my favorite assassin, if not my favorite overall character to play. 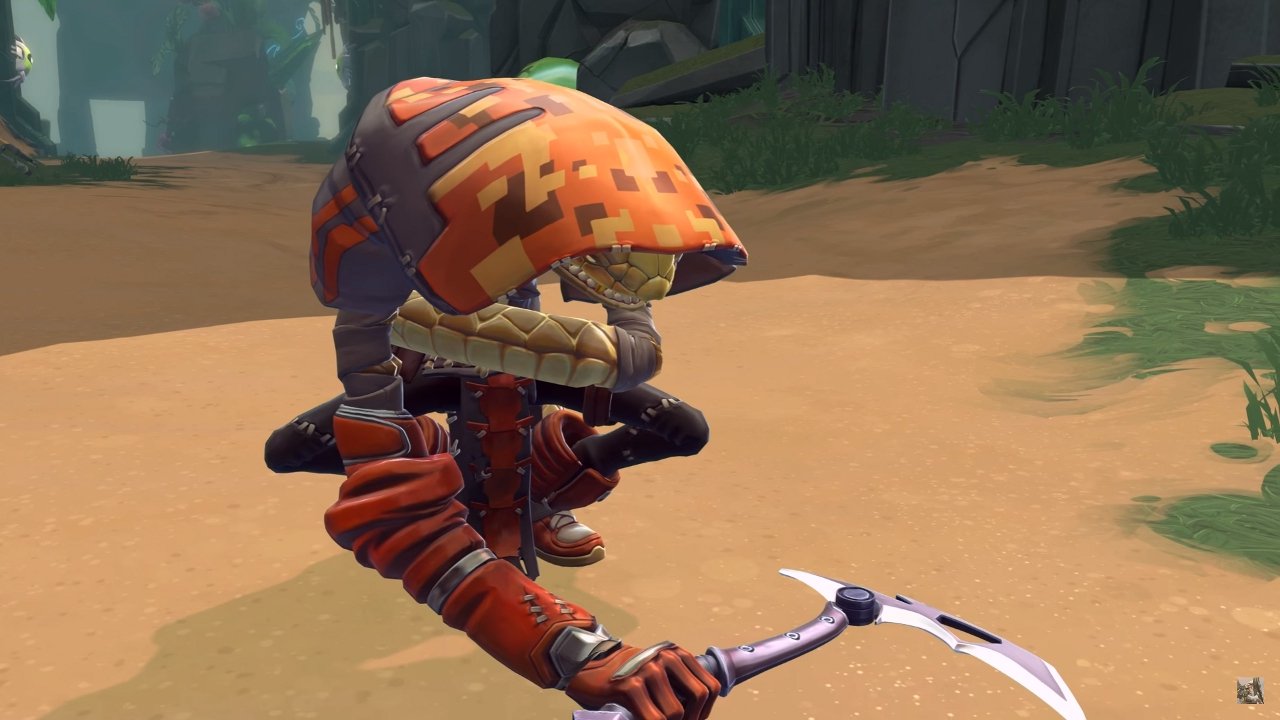 Pendles isn’t the only character to have a cloaking ability, but unlike all the others (Oscar Mike, Shayne and Aurox, Deande), his isn’t time-limited or tied to a skill cooldown. Any time Pendles breaks line of sight with enemies, he goes invisible and remains that way until he attacks.

On top of that, his Smoke Bomb ability drops an area that deals damage over time and puts him back into cloaking regardless of line of sight. The huge difference this makes compared to the other stealth characters is he doesn’t have to choose whether he needs stealth as an initiation or as an escape. He can go invisible by breaking line of sight, creep up on an unsuspecting sniper or weakened enemy, get the kill, then drop a Smoke Bomb to make an escape.

Pendles has a significant weakness: whenever he’s uncloaked, his speed drops to the lowest in the game. Coupled with his low health pool, it makes him extremely vulnerable when he is visible. To give him a fighting chance at taking down targets from stealth, his second ability Injection slows targets for a few seconds. It isn’t enough to keep a full health enemy from running away, but it’s plenty to keep anybody in range in order to get a killing blow.

His Ultimate ability surrounds him with a poisonous aura that reduces the cooldown on Injection. He can activate it while cloaked, but it gives his position away to enemy players. It’s still enough to fool the AI, so it can be used as an easy minion wave clear or as an amplification of his damage in assassinations.

Though he initially appeared built for competition, Pendles is also surprisingly effective in the campaign. Smoke Bomb and Miasma work well against swarms of small enemies, and both keep him cloaked. Injection can be even more satisfying; it will one-hit kill most small enemies, so if nobody else is around it’s possible to use it to break stealth, then immediately go back invisible via his passive ability.

Certain encounters play out totally differently since he can stay cloaked indefinitely. The bridge encounter in The Algorithm usually requires a Marquis, Toby, or Thorn to deal with the Deadeye snipers on the towers. With Pendles, I was able to sneak up on each one and take them out without any trouble. He might also become a favorite for speedrunning and/or farming bosses for legendary gear, since he can simply bypass so many encounters instead of battling through minor enemies.

Still, the competitive multiplayer is where Pendles shines. I’ve probably killed more enemy Battleborn who were trying to teleport back to base or browsing their Helix skills in the past few days as Pendles than the rest of my time with all the other characters combined. Aside from the obvious utility in taking enemies by surprise, some of my favorite things to do with his perma-stealth are taking out back end buildables unmolested, clearing minion waves before they’re even close to the front line, swiping enemy shards to starve their economy, and even stealing a mercenary camp out from under a dumbfounded Montana’s nose (video below).

With Pendles in play (and with the popularity of any newly-released character), some of the other characters have seen a bump in usage. Since an uncloaked Pendles is a severely disadvantaged Pendles, reveal abilities are paramount, so characters like Ambra and Toby are more useful now than they were. Playing against Pendles is pretty fun; it keeps me on my toes when I know there could be an invisible snake anywhere on the battlefield.

As a personality, Pendles is fun, but not a standout. He’s a cold-blooded contract killer with an Australian accent, which has to be a nod to Team Fortress 2‘s Sniper. I haven’t heard any hilarious lines, but he doesn’t grate on the nerves, so it’s at least a partial success on that front.

I’ve been having a ton of fun with Pendles, and I don’t think it’s just because he’s new. While I’ve tried and failed at being an assassin as Deande, I’ve found Pendles to suit my natural play style much better. He’s a sneaky snake, and I love him for it.