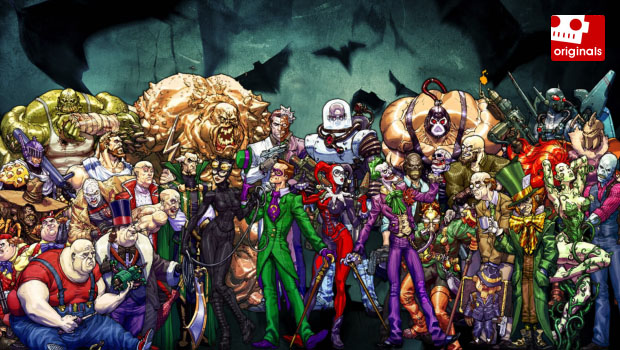 One of the best parts of Rocksteady’s Arkham series is how expertly the games exploited Batman‘s greatest asset — the greatest rogue’s gallery in all of comic books. Many of Batman’s opponents are as enthralling, if not moreso, than Bruce Wayne himself, and Rocksteady knew it.

From iconic nemeses such as The Joker and Scarecrow to lesser known criminals including The Mad Hatter and Deadshot, Rocksteady scoured the inmates of Blackgate Prison and Arkham Asylum to consistently surprise fans with a cavalcade of psychopaths and gangsters.

Although the next Arkham game is rumored to be a prequel set during the Silver Age, there are still plenty of baddies — new and old — that deserve an appearance in the series. We poured over our favorite Bat villains who are yet to make a tangible appearance in Arkham Asylum and Arkham City, and humbly present your most desired evildoers.

(Edit: Black Mask can actually be fought in the Robin DLC, it turns out. Still … put him in again!)

Though a relatively recent addition to Gotham’s criminal underworld, the Black Mask is nevertheless a popular and formidable foe, be it crime boss Roman Sionis or crazed asylum director Jeremiah Arkham behind the leering skeletal visage. His ability to control thoughts would make him a potential candidate for Arkham’s near-obligatory “mind screw” section, taking over from Scarecrow in Asylum and Hatter in City.

Not to mention, as one of Gotham’s most powerful and influential crime bosses, he’s in a perfect position to provide thug-fodder for the Dark Knight.

Firefly has one thing over and above the rest of Batman’s villains — he doesn’t really care about the Caped Crusader. Unfortunately, he replaces that token obsession with a criminally insane addiction to fire, and a need to burn Gotham to the ground. I really dig Firefly, not just because he’s got a pretty badass costume, but also for the fact that he’s very creepy when he starts waxing poetic about fire.

If there’s one thing Rocksteady’s gotten good at, it’s ramping up the creep-factor of Arkham’s residents, and the studio could have a whale of a time with ol’ Garfield Lynns. Not to mention, Asylum and City are two of the most gorgeous-looking games of the generation, and I’d love to see that visual splendor applied to a boss that drenches everything in flame.

The Ventriloquist
First Appearance: Detective Comics #583
Real Name: Arnold Wesker
Specialty: Getting gangsters to take him seriously when he’s an old dude with a puppet

The Ventriloquist’s puppet, Scarface, has appeared in both Arkham games already — once as Joker’s new toy, and once again as a dancing puppet in the Penguin’s museum. It’s about time his owner (or his property, as the case may be) finally turns up and restores a little dignity.

Arnold Wesker is the mild-mannered, bespectacled man behind the wooden puppet/ruthless mob boss. While considered a bit of a joke villain, there’s still something undeniably disturbed about a meek old man who is able to become a sociopathic criminal so long as he’s hiding behind a puppet alter-ego. Rocksteady could also use the second Ventriloquist, Peyton Riley — not only is she a better puppeteer, but she’s pretty damn brutal in her own right.

I love The Great White Shark as a concept. Originally a crooked financier, Warren White faked insanity to get out of jail time, but was sent to Arkham by way of a vengeful judge. His stay was covered in the Living Hell miniseries, which incidentally served as one of the inspirations for Arkham Asylum. While there, he was subjected to emotional and physical torture at the hands of the crazed inmates — Killer Croc cut a set of gills into his neck, while Jane Doe locked him in Mr. Freeze’s vacant cell, causing him to lose some fingers, his nose, lips, and ears. He eventually resembled his nickname, becoming The Great White Shark, and taking charge as the man in Arkham who could get anything for anybody, provided they served him in turn.

Briefly referenced in the first Arkham game, Warren White could act a perfect collaborator in a future game. Not necessarily a main villain, but certainly someone to be tracked down in order to unravel some inevitably extravagant scheme. He’s a really interesting antagonist, and since Arkham’s pretty much his playground, it stands to reason he should make an appearance.

Jane Doe made her debut at the same time as Warren White, and was the most responsible for his rebirth as the Shark. Doe herself is devoid of personality, save for a frightening desire to live other peoples’ lives. To that end, she compulsively murders her targets after getting to closely know them, using a range of tools in order to physically resemble anybody she chooses. However, she never stays happy in one skin for long, and has to constantly steal lives in a vain search for one that’ll keep her satisfied.

A sidequest in which Batman must follow a trail and track down Doe while she murders her way through Gotham could be a damn dark and paranoia-inducing mission for the Crusader. It would be a true detective quest that would push the game’s previously under-utilized investigative gameplay to its limits. Plus, she really is scary.

So, remember when I said that Rocksteady works well with upping the creep-factor of Batman enemies? I can’t even begin to imagine the field day the team would have with this freak. Men wearing pig masks are unnerving enough as it is, but when the guy behind the mask is a total nutjob who brainwashes people, mutilates their genitals, and fuses doll masks to their faces, well … yeah.

I have a feeling that whatever Rocksteady did with this guy would risk pushing the game into M-rated territory, but it’d be worth the risk just to see what it could come up with. Professor Pyg could easily provide one of the most horrific boss fights in videogame memory. Shudder.

I love Killer Moth, and not just because his costume is completely pimp. I have a thing for slightly pathetic villains, and Killer Moth is perhaps the archetype for such characters. It’s not that he’s unskilled — as a self-styled anti-Batman, he’s proven himself quite capable of utilizing advanced gadgets and can hold his own in a combat situation. Nevertheless, his choice of identity, color scheme, and inability to be taken seriously by anybody makes him rather pitiful, and lends him a uniquely bitter personality among Gotham’s bad guys.

Even if he’s just included to be taken out effortlessly (like Zsaz in Arkham Asylum), I’d love for the Moth to make an appearance. He’s got enough of an underground following, I think, to raise more than a few smiles should he pop up in a future game.

We’re going with the Todd version of the Red Hood because, well, obviously we would. Originally Joker’s alter-ego, a resurrected Todd took the mantle of the Hood to fight crime on his own aggressive, violent terms. More than happy to murder criminals as soon as see them brought to traditional justice, Red Hood’s violent ways have seen him come to blows with Batman on a few occasions, his chaotic approach providing a morally ambiguous contrast to Batman’s stoic, principled attitude.

Red Hood’s gotten plenty of exposure over the years and would make a fine opponent of Batman’s during the course of a videogame. Whether manipulated by a villain, or settling his own scores in a way that conflicts the Bat’s goals, there are plenty of ways Rocksteady could use him to put a roadblock in front of the player. Let’s have it.

Formerly an actual rat catcher, Otis Flannegan fell into a life of crime because he lives in Gotham City, and that’s pretty much what happens to anybody if they’re given long enough. As the Ratcatcher, Otis has the ability to communicate with and command vast armies of rats. It definitely sounds lame on paper, but when you actually stop and think about a man who can flood a city with millions of loyal vermin, one can’t help but think this guy’s got a better shot of taking over Gotham than just about anybody else. Except, of course, for the fact that he’s a C-list villain at best.

That said, someone at Rocksteady clearly loves the guy, as evidenced by the fact that he’s referenced in both Arkham games. In the first game, his gas mask and gloves can be found as part of Riddler’s sidequest, and in City, posters and hoodlum gossip make direct references to him. Plus, he’s really got one of the sweetest getups of Batman’s opponents, with a crazy gasmask/overcoat combo that makes him look pretty formidable. With the right writers, Ratcatcher could be a real somebody.

Part of the first major crossover event in DC Comics’ “New 52” relaunch of 2011, Gotham’s sinister Court of Owls has made quite the impression on fans, as well as Batman’s entire world. A secret criminal society that’s been quietly pulling strings throughout history, the shadowy Court of Owls manages to shake Batman’s belief system to its very core, as well as physically torment him thanks to its army of unstoppable assassins, the Talons.

The New 52 launch resembles Rocksteady’s games in a few ways, to the point where I’d be surprised that the Owls wouldn’t show up in some form, should the studio create a new game set post-Arkham City. If not the Owls in their entirety, then the possibly-deluded-possibly-justified “Owl” that is Lincoln March may make for a fascinating boss battle. Having Lincoln fly Batman around the city while he clings into a grappling hook could be a damn memorable encounter.