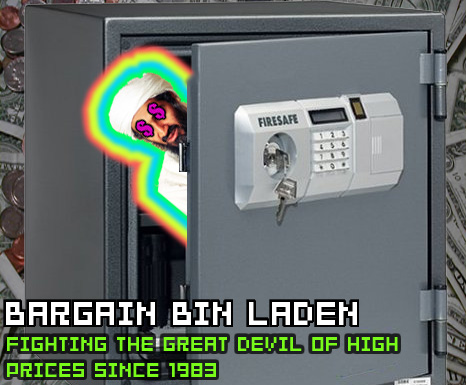 [Update: We’ve got plenty of great submissions thus far, but there’s still time left, people — you got ’til Friday.]

Afternoon, underlings. Aaron Linde here — and by here, I mean not at GDC. That’s right! While the rest of the staff is off committing Class A felonies in the city by the bay, I’m stuck in the Great Northwest, fending off bears with naught but bare fists and a smile. That’s hip Seattleite-speek for “finals”.

Being that I’m currently under the spiked boot of academia, there’s no Bargain Bin Laden this week. We’ll be returning to our regularly scheduled slick deals in a week or two, but in the mean time, how ’bout some freebies?

Up for grabs is a copy of every game featured on Bargain Bin Laden thus far — nine in total, courtesy of Destructoid, delivered to your door en masse by various Half.com resellers. All you’ve gotta do to win is create the perfect Bargain Bin Laden-style image edit for my forthcoming feature on Shenmue II, set to debut in two weeks. Make it funny, make it odd, make it utterly bizarre or make it scare the crap out of my girlfriend — whatever. Just make sure it has some connection to Shenmue or some variation thereof. Check previous editions of BBL to get an idea of how to work it. And, ‘cos I love you, here’s a half-decent source image to get you started. Need the Dtoid font? Never fear, we got you covered there, too.

Judging will be handled by me, Dick McVengeance, and whoever bribes me with the biggest wad of cash. I’ll announce the winner in the Shenmue II post, so keep an eye out for that. Send your submission to this e-mail address (make sure to remove the obvious anti-spam), and make sure to include a means of contacting you in the event your submission is chosen. Deadline for submissions is March 16th, so get crackin’!