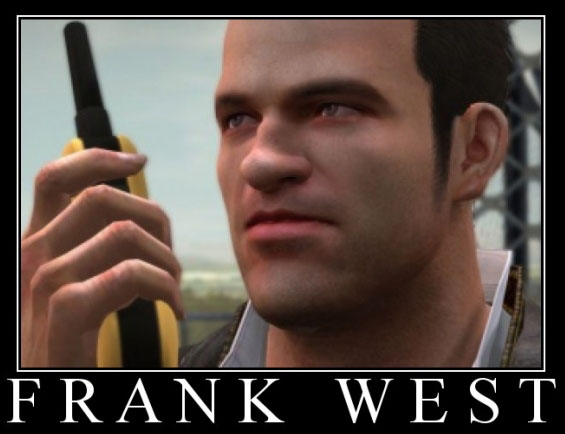 Time for another Badass of the Month Club, wherein the staff highlights a character or industry figure of noteworthy badassery.

When I first met Frank West, I wasn’t all that impressed. He’s ugly. He walks with a disconcerting limp. He’s not all that bright, and he comes off as totally shallow. All the guy cares about is JOURNALISM, and as a videogame blogger, that’s something I know quite a bit about. With all that in common, you’d think that Frank and I would have a lot to talk about. Not so. All the guy does is brag about the wars he’s covered (y’know) and the scoops he’s scooping. At least, that’s what I thought at first.

My opinion changed after spending the course of Dead Rising and Dead Rising: Chop Till You Drop with Frank. After experiencing a zombie hell with the man, I came to understand that he is one of the most respectable, stand-up guys on the planet. As it turns out, he’s far from one dimensional; in fact, he’s one of the most well rounded mother f*ckers I’ve ever met. It just takes a little while to find that out.

Hit the jump to find out why I love Frank West (warning, spoilers ahoy).

Frank is totally comfortable with himself

Frank’s not that fit by videogame protagonist standards. He’s no where near as slim and sexy as Cloud Strife, nor is he jacked up and ripped like Brad Nicholson Marcus Fenix. Yet, the dude is still ready to drop trou(sers) at a moments notice. He’ll carry on full conversations with incredibly good looking women, highly intimidating Ving Rhames look-a-likes, and homicidal clowns all in his underwear, or better yet, in a strange woman‘s underwear. Either way, it doesn’t matter to Frank, as long as he’s comfortable.

Frank cross-dresses like it’s totally not weird, and he’ll make you feel like you’re the weird one if you don’t approve. He’s also not afraid to cosplay his favorite videogame characters, even if they are semi-for kids like Mega Man X, or from games that sold like shit like Bionic Commando. He’s even known to cross-dress cosplay as Roll from Mega Man Legends, which is almost no one’s favorite version of Roll.

In short, Frank doesn’t give a fuck, and that makes all of his acts of heroism all the more admirable.

There are a lot of videogame “heroes” these days that have the freedom to go wherever they want and make “moral choices” throughout their adventures. A lot of these “heroes” kill innocent people, screw prostitutes, and engage in other “shocking” taboos. Frank’s not necessarily above that stuff, but the thing about Frank is that if he fails to rescue even one person at the Willamette Mall, just one, he wont even bother trying to save his own life at the end of the game. Frank doesn’t save people for the glory, or because he has to, but because if he doesn’t, he will choose not to see the end of his own game.

It’s a little frustrating; needing to be a perfectionist in order to witness Frank’s eventual escape from Willamette. That said, the sense of mastery one achieves after beating the clock (and the thousands of zombies) by rescuing all those defenseless idiots is more than worth it.

That’s Frank in a nutshell; he’s a master.  A master of multi-tasking, at beating zombies to death with a giant fake lipstick container, and at “keeping it real” even when the shit has totally hit the fan.

A little over three fourths of the way into Dead Rising, Frank discovers that he’s infected with the zombie plague. There is no cure. It may be a few days, or a few years, but no matter what, Frank’s going to get gross and start eating people.

Now, what would you do if you knew you were going to die at any time, by zombification no less? Would you just throw in the towel? Try to make out with the sexy Latina that 24 hours ago tried to run you over with a motorcycle? Go to the grocery store and fill your face with steaks until you’re too fat to move? Go psychopath and start hacking up strangers with a machete, then blame it on Vietnam flashbacks?

Not if you’re Frank West you wouldn’t. Instead, Frank West goes out there, kicks even more zombie ass than he did before he knew he was doomed, takes on the god damn US Special Forces, punches and bullet-proof army dude in the balls, and fucking totally owns the moment by letting out a Hollywood style “scream to the heavens”.

I know I’m swearing a lot, but it’s hard not to when you’re talking about Frank West. He’s just inspiring like that.

You ever look out into your future and see nothing but obstacles, nothing but doom, no way to win, and thousands of ways to lose? It just makes you want to break down and cry, am I right? Well, if you need a role model to show you the way through these trying times, look no further than Frank West.

When presented with hundreds of thousands of zombies, what does he do? When a random suicide cult shows up and steals all his clothes, how does he react? Well, first he might take pictures of them, or if he’s feeling creative, he may stack servebot masks on every zombie/cult member he can find, then take pictures of them. If he’s feeling violent, he may beat one of them senseless, rip their arm off, then stick said arm into the face of the first zombie he sees. If he’s feeling impatient, he may just skateboard through them, or crawl right over them, or run through them with revved up chainsaw and a hockey mask on.

At least, I think he did. Even if he didn’t, I know that he would if given the opportunity.

So, those are most of the reasons I love Frank West. I didn’t name them all because I wanted to leave some room for you in the conversation. So tell me, what do you love most about Frank?