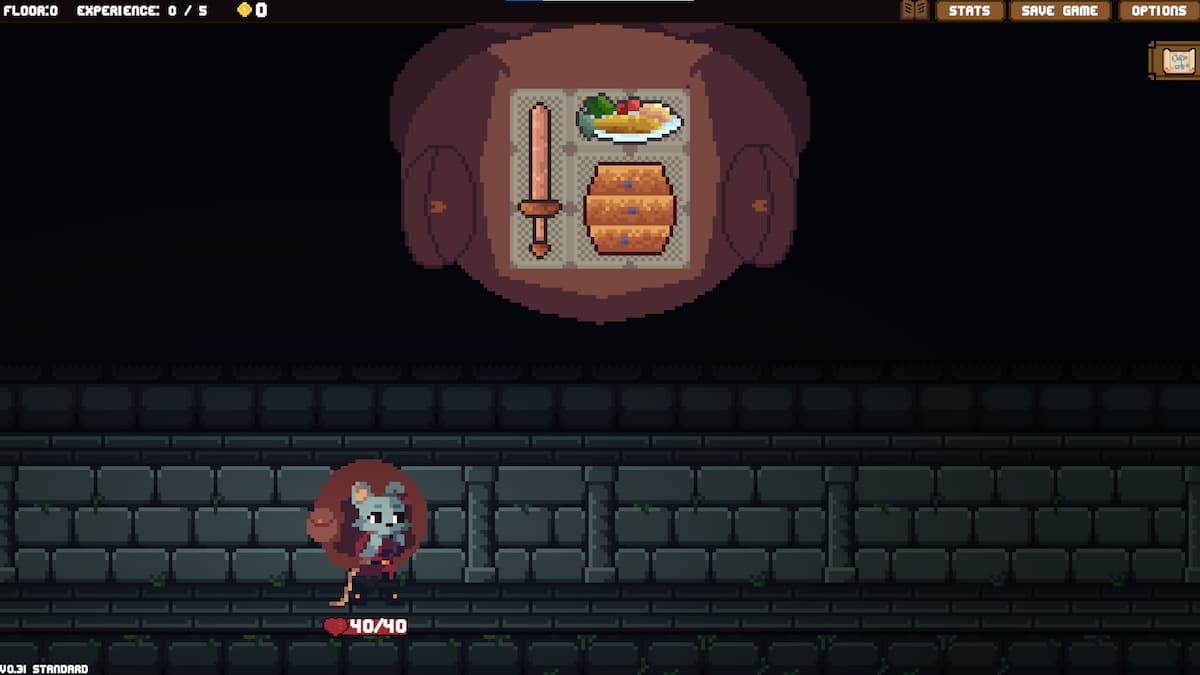 Why do you build me up?

The satisfaction that comes from doing well in a deckbuilding game is like nothing else. Whether you’re playing a physical game like the excellent (if dryly titled) DC Deck-Building Game or a video game like the infinite time-suck that is Slay the Spire, it just feels good to build and unleash your own slate of moves. But recently, I’ve found myself bored by straight up-and-down deckbuilders. A lot of them feel very similar, and while there are plenty of good games playing with the same ideas, I’ve started actively seeking out deckbuilders with slightly bigger ideas.

And if it’s big ideas you want, Backpack Hero is your new best friend. This early-access roguelike is one of the most inventive deckbuilders I’ve ever played.

What are ya buyin’, stranger?

Backpack Hero wears its Resident Evil 4 DNA proudly on its sleeve. The game is entirely built around fitting weapons and consumables into a limited space, and the eponymous backpack bears a suspicious resemblance to RE4‘s legendary attache case. But Backpack Hero‘s survival horror cousin treats inventory management as a neat diversion from a larger game. In Backpack Hero, it is the game.

Every item in Backpack Hero takes up a certain number of squares in your backpack. A certain shield will eat up a 2×2 square, while another will only occupy a 2×1 rectangle, so choosing which one to bring along is of maximum importance. But it’s not just about what you take with you – it’s also about where it goes. Most of the items in the game will be buffed in some way if they’re placed in specific slots relative to other items. A helmet, for example, will only function if it’s at the top of your bag, and a breastplate will buff adjacent pieces of armor. You might randomly happen across a really sick sword, but to take it, you’ll need to sacrifice a defensive build that you’ve carefully fostered.

Tough choices like that are central to Backpack Hero. Getting married to any one build early in the game can spell defeat, and you have to be willing to let go of something that’s working now if you want to plan for the future. Actual combat is pretty bland and repetitive, but that’s not the draw. Backpack Hero is a game about inventory management, and it may feature the best inventory management system ever. Where new cards are simply added to the deck in more traditional deckbuilders, Backpack Hero makes every pickup feel like a little puzzle.

Most of what I’ve described here is true of the game’s first playable character, Purse. But Backpack Hero has a few other fellows to choose from as well, and they each play dramatically differently. You could also play as a mystic frog, who pulls items at random and uses the backpack as a strategic playing field; maybe you’ll end up preferring the bird bard who can tear discreet specialized pockets into his backpack. These aren’t just characters with different specialties, a la Slay the Spire, they’re characters that totally reinvent the game (think of something like Dicey Dungeons for a good reference point).

Backpack Hero also has various different character-specific challenge modes that force you to come up with builds that you might otherwise ignore. In addition to providing a ton of extra content, these challenges also expose exactly how deep customization can get in Backpack Hero. Synergies that might seem totally insignificant become vital when, for example, you can’t use any traditional weapons. Brute force can be handy, but what if you played music for the enemy until they joined you like a temporary Pokémon? There’s a lot to uncover in this game, and it’s only getting bigger and more dynamic as time goes on.

The game is still in early access, and the developer, Jaspel, has promised significant updates in the future. Apparently, there are plans to introduce a city-building mechanic to provide some progression hooks between runs, and I’m very excited to see how that turns out. To be honest, though, Backpack Hero already feels like more than enough for me. Backpack Hero, in its incomplete state, is richer and more engaging than plenty of full games I’ve played. I’m excited to see how it grows and changes in the future, but I don’t think there’s any reason to wait and see. What’s there now is excellent, and there’s a pleasantly hefty demo that you can try out if you’re still not sure.

Filed under... #deckbuilder#roguelike#Slay the Spire