Ahead of the open beta (August 12–16) and even the early access kick-off (August 5–9), Jordan Devore and Chris Carter were able to take on the shambling hordes in several PvE campaign missions. We were supposed to try the PvP too, but uh, more on that below.

Chris: Ha! Like I’d try PvP even if I had the chance.

But seriously, our test ran into some PvP-related issues. So our team forged ahead into PvE while everyone else tried to figure it out, and we nearly cleared the entire first act. My first reaction? Surprise. Back 4 Blood was more fun than I thought it would be.

It really shows just how much better the systems are with full team voice chat when everyone is in sync. In case anyone hasn’t been following along, Back 4 Blood features teams of four (Back 3 Blood?), and everyone can choose to take a different weapon or play a different role dynamically. The entire session, as a team, we were saying things like “hey I have rifle ammo, anyone got shotgun bullets?” (ammo is in a mass pool in your inventory like Fornite, and everything you own, including cash, can be dropped). We even pooled money to buy team upgrades. It’s all light strategy stuff, but plays out so well, and will come in handy for PUGs (pick up groups), especially with the radial ping menu.

As for our experience with the game itself, it started off fairly simplistic on the standard setting in the first act, but a few stages in, it got way more intense. By the time we got to the objective-based missions that asked us to plant bombs on a giant boat, we were losing people. Oh, about that! There may or may not be an amazing story about that level.

Jordan: I would say that it took a bit for us to feel challenged on the pre-set difficulty option, but once we did, Back 4 Blood started bringing back some of those tense-yet-fun memories from the old Left 4 Dead days. The ship was probably the first real example.

After snaking our way through multiple crowded floors, reaching the top, and catching our breath on an overpass, we were told we’d need to double back and plant two bombs further down. Problem is, a few of us were suffering a near-death-by-a-thousand-cuts, and then one of our teammates got knocked overboard, to their demise, by a special infected (known in-universe as a Ridden). In the chaos of it all, I honestly couldn’t tell you which archetype it was — one explodes, one launches phlegmy sniper shots, another is a tall club-armed tyrant — but long story short, Chris and I instinctively booked it.

I accidentally jumped off the deck but somehow fell into a lower windowsill and survived, only to try and revive one of our fallen squadmates who was along for the wild ride while Chris beelined it for the detonation site. Somehow, someway, he finished the job. It was the first time we didn’t all make it to the safehouse. Sure, we had some overwhelming horde moments before this zone — it felt like we set off literally every mob of crowd-alerting crows we came across — but this was our first “intense” PvE setpiece.

We also had some run-ins with a fog modifier and a window-boarding last stand. 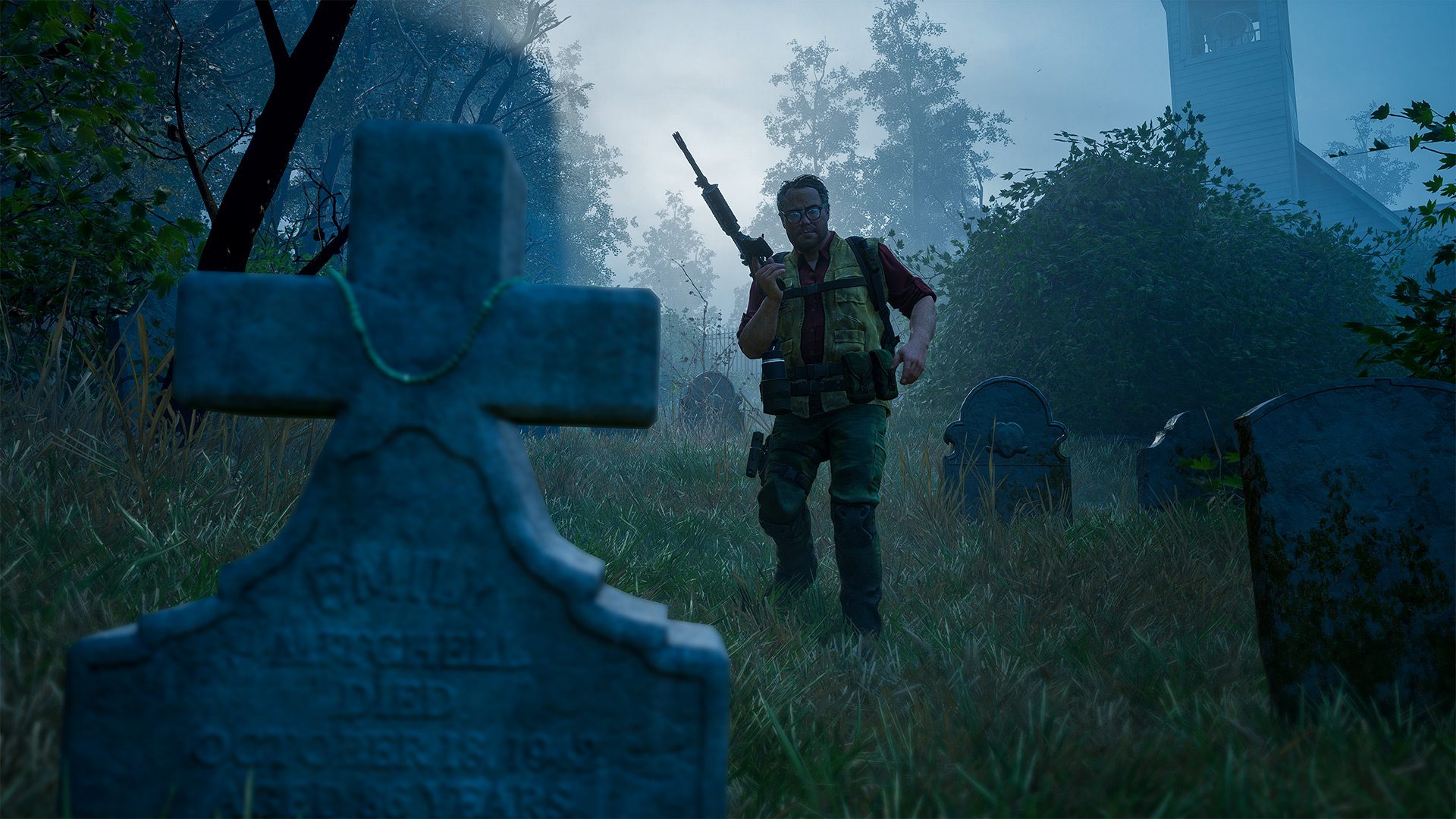 Chris: It was a perfect storm: a storm that only I escaped from. And it was a thrill!

I vividly recall the murmurs of all of my teammates saying “guys I think I’m in trouble,” and running past one of them (haha!) on the ground, being mauled to death by a giant swarm of zombies I had no hope of clearing out with 50 rifle bullets on hand. At that point, Jordan, you were on a completely different level with no hope of escape. But since all we needed was one person to survive to clear it, it was all good. There was so much confusion I don’t think anyone realized I was still alive until I announced it on comms.

The subsequent fog level you mentioned was also a ton of fun. On high settings, the light effects were very nicely done, and at one point I had to move a bit to see a shadow of a zombie to get a good line of sight on it. We don’t see too many high-budget zombie games these days. There was a bit of wonkiness, though. On a later level, on a farmstead, a few of us ended up falling off a bridge (you automatically hang off in a really gamey way in an incapacitated state while someone “revives you” [pulls you up]). It reminded me of all those PS2/PS3-era games where you’d instantly die if you put even one toe in water.

That jank was few and far between though, and Back 4 Blood leans into some arcadey elements regardless: more so than a few other zombie shooters before it. Take the skill/card system for example!

Jordan: You can never really know how “replayable” a game will be until you’ve truly lived in it, and a couple of hours with a beta can only tell you so much, but I do like the general concept of cards, decks, and semi-randomized events (once again curated by a shadowy Game Director) in Back 4 Blood. Since we were able to power through quite a few PvE levels in our preview session, we had a lot of opportunities to select new cards to bolster our survivors — sometimes a modest boost to HP or stamina that can ultimately add up, sometimes a flashier upgrade like turning my melee bash into a fast combat knife.

Given that I had plenty of rifle ammo, I maaay have gone a bit overboard with the stabbing, admittedly. It’s hard not to spiral into overconfidence and let your guard down. A bite here, a bite there, and suddenly your health pool is mysteriously low.

While I didn’t have a super good read on what everyone else was choosing from their shuffled stack, communicating card selections in between each story level and planning decks so they specifically complement each player’s specialties will be important if you want your whole team to pull through. I feel like you had a card that let you regenerate your health, though. I was so jealous. I should’ve taken the time to build out a custom deck from Fort Hope (home base) before we began our PvE match, rather than use a starter deck, because I never pulled anything like that. But I didn’t want to hold up the crew.

I got more of a sense of card variety (and actual impactful trade-offs to weigh) from a recent trailer, so I’m hoping the full game in October — barring a delay — can deliver. Progression is going to be a carefully watched topic given Turtle Rock Studios’ missteps with Evolve. I hesitate to even invoke that name again, because Back 4 Blood seems destined to avoid that specific fate, but there are other, smaller ways it could still go awry (especially under WB), even if the gameplay itself is giving people what they want. 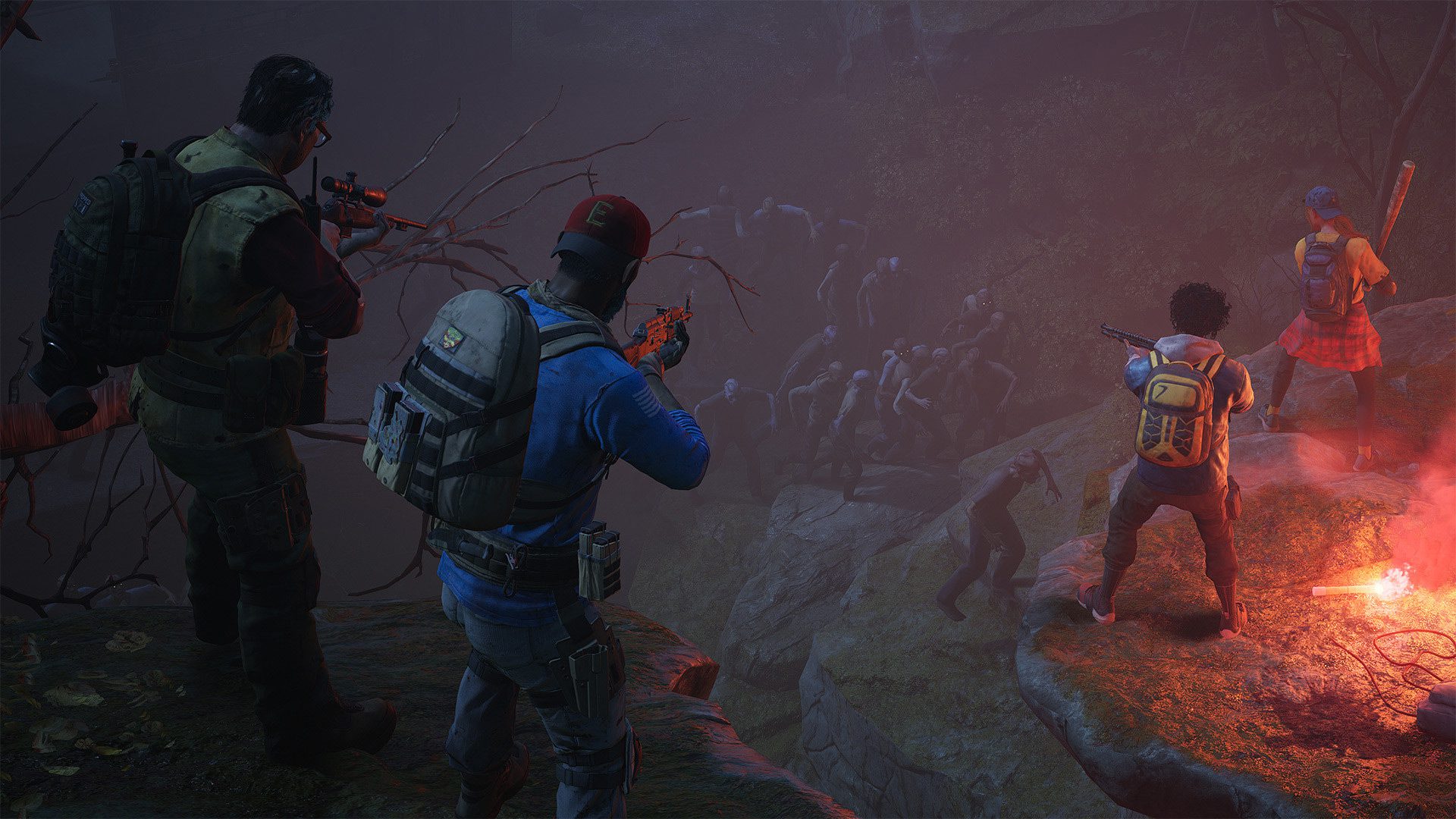 Chris: Yeah, communication is key, especially if someone has 1499 gold and needs just a bit more for a team upgrade. In PUG groups I can see people selfishly starting a round or running into danger constantly, but Back 4 Blood has the right amount of communication without becoming annoying.

But to speak to your replayability point, Black 4 Blood seems like it’ll be a really great first playthrough. The question is whether or not the progression system is going to hold long-term. Based on semi-recent history, I’m not betting any money on it. But there’s so much they can do with things like the fog modifier and those overarching events…I really hope this doesn’t become another Evolve with so much promise that’s cut short.

Always-online is going to cut a group of people out immediately, as is a lack of split-screen (which has become commonplace these days). We’ll see! After playing it, I’m more hopeful than I was.

Jordan: My beta impressions tell me that this is probably the closest anyone’s come to rekindling the Left 4 Dead vibe since that series just became a vehicle for character cameos in other zombie games, which is a great starting point, but my gut tells me that there will be caveats to deal with, especially the fine print you just referenced.

I’ve come out of the preview feeling positive about Back 4 Blood, though, whereas before trying it, I was mostly apathetic. I ignored most of the trailers this year.

I’d encourage everyone to try the open beta — specifically the period starting August 12 that doesn’t require a pre-order — to see what’s what. Barring tech issues, this should be a fun, memorable beta experience. Just maybe stick to the two PvE maps.