Aviary Attorney is the ingenious brainchild of Coventry-based Sketchy Logic; the living half of which (for the sake of this project) is comprised of programmer and designer Jeremy Noghani with graphic artist and animator, Mandy Lennon. The deceased half of the team behind the litigious project are French composer Camille Saint-Saëns and French caricaturist Jean Ignace Isidore Gérard. It may sound like an odd assemblage of talent behind the production of a videogame, but the end result is almost breathtakingly charming. Have a look at the game’s Kickstarter trailer and see if you agree.

According to the project’s crowdfunding page, the basis for Aviary Attorney came about after the team discovered the surreal works of the 19th century artist and illustrator known by the pseudonym J. J. Grandville. By carefully scanning and animating these images the talented duo were able to “give life to Monsieur Falcon, Sparrowson, and all the other characters.”

The team also points out that “nearly every part of the game is drawn from or inspired by the public domain,” for instance, “backgrounds and items have been borrowed from a range of 19th century illustrated books. The music takes the form of transcriptions and adaptions of French romantic composers, most notably Camille Saint-Saëns.” For a fittingly classy finishing touch, the title’s font is noted as being over one hundred years old. That’s attention to detail, folks.

Aviary Attorney takes place in Paris of 1848 and follows the adventures of bird-brained defense lawyer Jayjay Falcon and his loud-mouthed manservant, Sparrowson. The pair receive a lucrative offer from the Demiaou estate, of which, Bourgeoisie kitten Caterline Demiaou has been accused of murder and it’s up to you to deliver for her a Not Guilty verdict.

Falcon will take on a total of four cases during the course of the game. Once a client is accepted you’ll find yourself outside the court where you’re free to explore the landmarks of the famed City of Light. However, according to the game’s description, you won’t have much time for sightseeing, as “making smart choices about where to go, who to talk to, and what to say is vital to uncovering the most evidence” in the small amount of time before each trial. 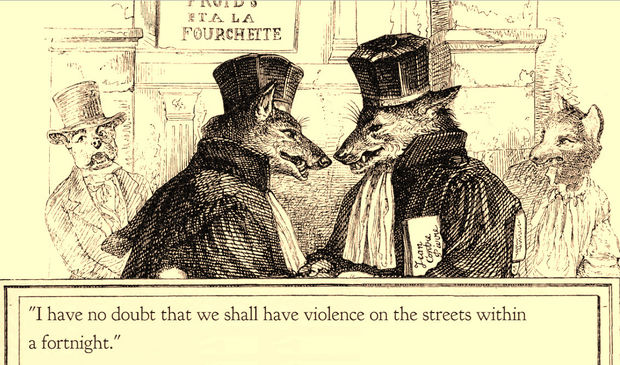 The other half of the game will take place inside of the court, where Falcon is tasked to “think and act carefully to prove his client’s innocence” by “scrutinizing testimonies and by presenting evidence at opportune times.” The development team cautions that your mistakes made in this process will eventually “add up, tipping the jury’s opinion towards a Guilty verdict.” However, even if you lose a case, the team reassures us that the game’s story will continue, “albeit, a little darker than before…”

The similarities to the Ace Attorney franchise are obvious, but the beautiful way in which the formula is presented here leaves me with nothing but admiration. I’d be hard pressed to say that this is simply a copy or spoof of the popular legal sim, in fact; I’d go so far as to say that this artistic twist on the genre may well be a better fit for a certain segment of the gaming populace of which I am definitely a member.

Thus far, the development team have raised £5,008 of the £7,000 necessary to fund the project with twenty-five days left to go. Reaching this point this early in the process could pave the way towards some of the lofty stretch goals outlined on the title’s Kickstarter page; most notably to hire a full chamber orchestra to perform the soundtrack if the project reaches the £150,000 mark.

Although I don’t think they’ll need it, I do want to wish the team the best of luck with the project, and if proven commercially successful post Kickstarter, I’d love to see this idea eventually branch out into a series — the premise seems to me too large to contain within a single game.