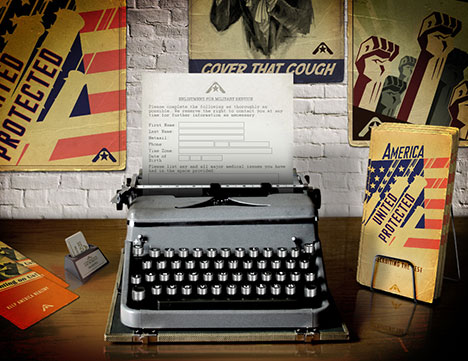 A week and a half ago, GamePro trumpeted the exclusive story on Resistance 2 that would be appearing in their August issue — specifically, that “FREE Resistance 2 beta codes” would be offered inside. The Internet was abuzz with speculation on how that would play out, and now we’ve got something of an idea.

Today, they posted images (only subscribers can view them full-size) of the special three-page gatefold cover; the magazine will soon be at newsstands everywhere, but subscribers have apparently already gotten their hands on the issue. The very last page offers a faux-fifties advertisement exhorting Americans to enlist in the Army. The page provides the opportunity to “ENLIST TODAY” at GetAWarJob.com.

A screencap of the Web site can be seen above. The only thing on the site that explicitly hints at a relation to R2 is the appearance, in multiple locations, of the original game’s star logo. Currently, the site offers one function: entering basic personal information (name, address, medical history, etc.) as if you were actually signing up for the armed forces.

But remember, this is the Web site that the GamePro cover promotes, so my guess is that Insomniac is gathering people’s information for some sort of contest with the purpose of determining who will get access to the Resistance 2 beta. I’ve enlisted…have you?