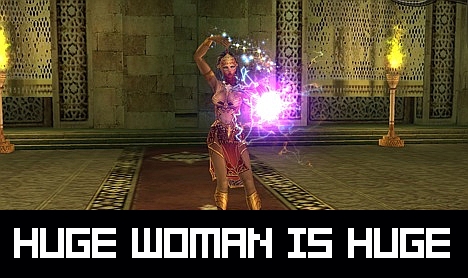 Atlantica Online is an MMO created by NDOORS Interactive. While not exactly Blizzard or Mythic Entertainment, the game appears to be fairly original by MMO standards. We recently got our hands on a few new screenshots of the game in action. The setting is the Taj Mahal and a ragtag group of players are fighting a really huge chick and some kind of lion.

The game revolves around finding the magical city of Atlantis. Of course, finding Atlantis isn’t as easy as fast-travelling in Oblivion. Players will be forced to traverse several fantasy settings including the Hanging Gardens of Babylon and Angkor Wat.

There are a couple of interesting features included with the title. The game uses a mercenary system, which allows players to “bring on” mercenaries to aid in battle. These A.I. constructs are customizable by the player and can certainly help in those lean times when friends aren’t around. According to the game’s official website, the game also features a town control system, where guilds can cash in and control a town’s infrastructure and growth.

I can’t say I’ve played this before, but it looks decent. Have any of you tried this out before?